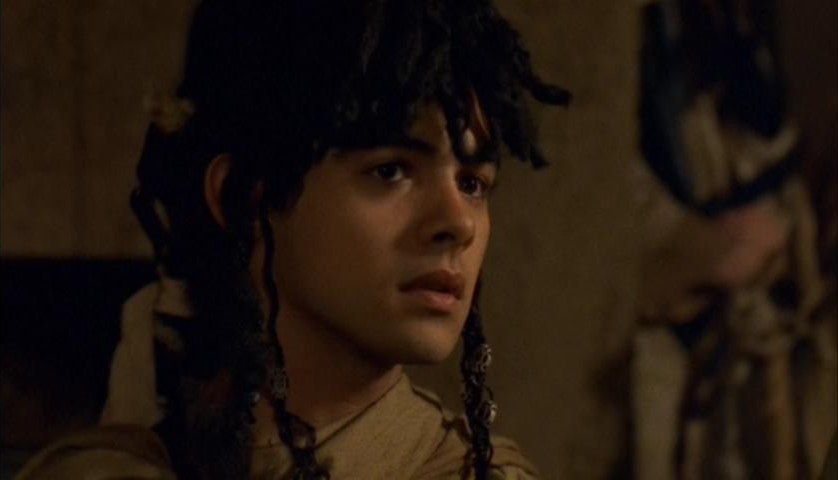 Abydonian son of Kasuf and brother of Sha're, Skaara was the leader in the group of native boys who observed the first humans to visit the planet from Earth. Skaara led his friends in an effort to free the captured team and defeat the Goa'uld Ra once and for all, and formed a deep bond with Jack O'Neill -- who was reminded of his late son by the young Abydonian. One of Skaara's closest friends was the Abydonian Nabeh, who died during the fight against Ra's occupation forces.

Skaara grew up believing Ra to be an evil god, and assisted in the Abydonian's forced naquadah mining operation. When the Tau'ri arrived, he believed they were sent by the Supreme System Lord, and bowed before them. However, he was soon convinced otherwise by their hospitality and led the group back to the Abydonian capital city, with Kasuf. Skaara was fascinated by the humans, dazzled by the cigarette lighter O'Neill gave him, and the Tau'ri weaponry.

Klorel takes control. From "Children of the Gods"

A year after Ra's defeat, Skaara was unexpectedly reunited with O'Neill when the colonel returned to Abydos. But the Goa'uld Apophis arrived soon after, and Skaara was taken captive by Apophis's battalion and implanted with the Goa'uld Klorel -- Apophis "son." For a year his whereabouts where unknown, until SG-1 intercepted Klorel's Ha'tak mothership en route to attack Earth. O'Neill zatted Klorel to reach Skaara, who was buried under the Goa'uld's dominating consciousness. He was overwhelmed with guilt for the atrocities he had been forced to commit, and for the assault Klorel was about to unleash against Earth. When Klorel reasserted control and nearly killed Daniel Jackson with a Goa'uld hand device, O'Neill was forced to shoot and kill him. But Bra'tac, then serving as his First Prime, revived Klorel and Skaara in a sarcophagus. When SG-1 and Bra'tac foiled the plan to invade Earth, Apophis and Klorel fled through the Stargate -- with Klorel fighting to maintain control against his strong-willed host body.

An injured Skaara pleads for help. From "Pretense"

Nearly two years later Klorel, still within Skaara, was fleeing a battle group dispatched by Heru'ur. His defeat eminent, he fled to the planet Tollana, where he knew that the Tollan would use their advanced weaponry to stop his pursuers. The gamble paid off, and Heru'ur's motherships were destroyed in orbit. But Klorel's death glider crashed on the planet's surface, and with the Goa'uld injured, Skaara briefly regained control. He plead with the Tollan to help him escape the "demon" inside him.

The Tollan called a triad (three-sided trial), with Skaara asking for O'Neill and Jackson's assistance in the proceedings. They won, and Skaara was freed from Klorel, eventually returning home to Abydos. More than three years later, Skaara welcomed SG-1 back to Abydos to help defend the planet from Anubis. Skaara had recently been betrothed, and asked O'Neill to shau'lo'ki -- to stand beside him as his best man.

During the firefight against Anubis's army, Skaara was shot by Anubis's invading Jaffa and taken into the catacombs by SG-1. He succumbed to his wounds and died, but his spirit transcended into an ascended being, guided by the powerful being Oma Desala. After Anubis wiped out the entire population of Abydos, Skaara appeared to the team to tell them that Oma had helped the entire Abydonian population to ascend.

"Stargate" the Movie - The young and idealistic son of the leader of Abydos, Skaara led a small band of boys in freeing the team from Earth and defeating Ra's oppressive forces.
Children of the Gods - Skaara is kidnapped by Apophis, and forced to become host to a Goa'uld.
Within the Serpent's Grasp - SG-1 finds Skaara on an attack ship headed for Earth, and learns that the Goa'uld who controls him is named Klorel -- and is the son of Apophis. O'Neill is forced to shoot him to stop him from killing Daniel.
The Serpent's Lair - Klorel's Jaffa revive him with a sarcophagus, and Skaara is forced to continue participating in the assault on Earth -- though he fights against his symbiote's control.
Pretense - Skaara/Klorel crash-lands on Tollana, and are put on trial to determine who should control Skaara's body. With help from SG-1 and the Nox, Lya, Skaara is freed from Klorel.
Full Circle - Skaara dies in an effort to defend Abydos from Anubis, and ascends to a higher plane of existence with the help of Oma Desala.