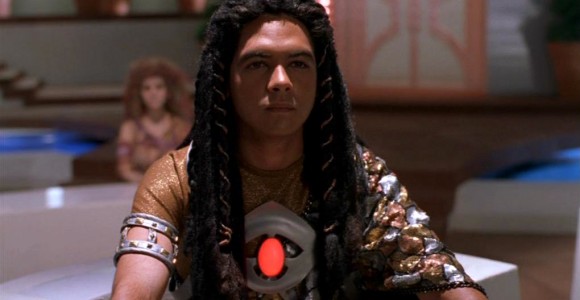 The Tollan put Skaara and Klorel on trial to determine who will control the host body, calling on SG-1 to defend their friend's claim against the Goa'uld.

Two Goa'uld motherships pursue a small glider in orbit of a large, beautiful planet. Ion cannons on the surface blast forth, destroying one, then the other ship. The death glider falls into the atmosphere, crash-landing in a remote region. Local village men rush to the scene, and find Skaara, missing friend of SG-1, injured and pleading for help.

Skaara has spent the past two and a half years possessed by the evil Goa'uld Klorel, and participated in a thwarted attempt to attack Earth ("Within the Serpent's Grasp"). Pursued by an enemy Goa'uld, Heru'ur, Klorel fled to the planet Tollana, inhabited by a highly advanced race of humans ("Enigma"). Klorel knew that they would destroy Heru'ur's ships, and his bet paid off.

But now, a new problem has surfaced. Klorel temporarily lost control of the strong-willed Skaara, who requested to be freed from the "demon" Goa'uld within him. Because both Skaara and Klorel are sentient beings within the same body, the Tollan call a triad – a civil trial, to determine who should have sole control of the host body.

To represent him, Skaara summons his close friend Jack O'Neill and his brother-in-law Daniel Jackson. Narim, a leader among the Tollan and former flame of Major Carter's, goes to Earth and brings SG-1 to Tollana.

The reunion with Skaara is tense, since O'Neill doesn't want to get to close to a boy infected with a "freakin' Goa'uld." But Skaara and Klorel wear a Tollan device that suppresses the parasite's control over the host, allowing both to speak freely.

Also present at triad is Lya, a beautiful woman from the highly advanced and passive Nox ("The Nox"). Though she is a friend of SG-1, Lya has been brought by the Tollan to serve as a neutral "arcon," a combination of attorney and judge. It is she who will cast the final vote for Skaara or for Klorel.

Representing Klorel is Lord Zipacna, a Goa'uld and one of Apophis's most loyal underlords. Zipacna argues that the Goa'uld use humans when needed because they are lower, less intelligent lifeforms – just as humans use animals for food and as beasts of burden. Skaara offers testimony of the horrors he has gone through, the atrocities he has forced to witness helplessly.

Meanwhile, Teal'c and Carter follow the Jaffa soldiers who came to Tollana with Zipacna. They observe them tampering with the Tollan ion cannons in some way, and presume that the Goa'uld are planning an attack and using the triad to buy time. Their claim is supported when a Goa'uld mothership arrives in Tollana orbit.

The Tollan examine the cannon, but find no tampering. Carter suggests that the Jaffa may have been "painting" the cannons – marking them as targets, so that they could be taken out from space. But the Tollan are arrogant in their advanced technology, believing that nothing can harm them – especially not an attack from such a less-advanced race as the Goa'uld. Chancellor Travell ignore SG-1's warnings, and demand that not another word of it be spoken, threatening that O'Neill and Jackson will be replaced by someone else as Skaara's arcon if they persist.

Disobeying O'Neill's order, Teal'c pursues the matter. He visits the Nox woman, Lya, and enlists her help. Meanwhile, the trial continues. Lord Zipacna now argues that Klorel cannot be separated, since he would die without a host and Tollan law forbids the death penalty. O'Neill and Jackson suggest that the Tok'ra could remove the parasite without killing him, and find a new host.

A final vote is called, and Lya finds in favor of Skaara. Both beings have the right to live, she says, but life as a slave in one's own body is not life at all.

Using a hidden communications device, Zipacna signals the orbiting vessel, and the Goa'uld attack begins. Everyone rushes outside, and Goa'uld death gliders fly down and attack the city. The ion cannons have indeed been targeted, and blasts from the ship destroy them all simultaneously.

Teal'c and Lya reveal their plan to the rest of SG-1. Lya has used her powers of illusion to hide one of the cannons. Teal'c, having observed the cannon's controls over the shoulder of a Tollan technician, fires it, and destroys two death gliders and the Goa'uld mothership. Tollana has been saved.

The Tok'ra arrive, and remove the Goa'uld Klorel from Skaara's body. He is to be taken to the Goa'uld world of his choice. Skaara, though, is finally free. 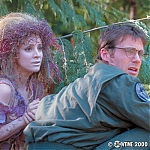 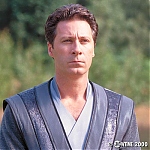