Dialing Up: The Official Guide to Seasons 1-5 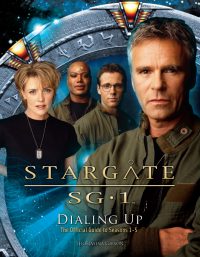 The official, full-color guide to Stargate SG-1 Seasons 1-5 includes episode guides, cast and crew interviews and an insider's look at the show's production!

Starting where the blockbuster Stargate movie left off, Stargate SG-1 quickly became a sci-fi phenomenon in its own right. The record-breaking ten-season series continued the story of Colonel Jack O'Neill (Richard Dean Anderson) and his elite military team as they probed the secrets of the Stargate. This bumper volume takes you back to the beginning, covering all the episodes from the first five seasons of the show, and is packed with full-color imagery, exclusive interviews with the cast — including contributions written by them, giving their own take on their character — and crew, and behind-the-scenes secrets. An official full-color companion that's a must for fans of the show! From Amazon.com