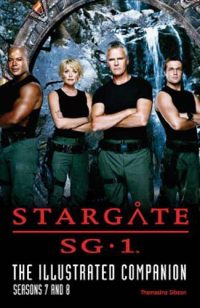 The fourth SG-1 companion goes in-depth on Seasons Seven and Eight, with an episode guide, commentary, cast and crew interviews, photos, and more.

This is the official companion to Seasons Seven and Eight of Stargate SG-1, SCI FI Channel's top rated show, and one of the top-rated shows on all of cable TV! Following on from Stargate SG-1: The Illustrated Companion volumes 1 to 3, which covered Seasons One to Six, comes volume 4, coming right up to date, with full details of all the episodes in Seasons Seven and Eight! Featuring more exclusive new interviews with all the cast and crew, giving the in-depth, inside story of the hit sci-fi show; story synopses are followed by extensive commentary and detailed behind-the-scenes information. As TV Guide says: "Forget Trek! Stargate is now the biggest sci-fi show on TV!" From Titan Books