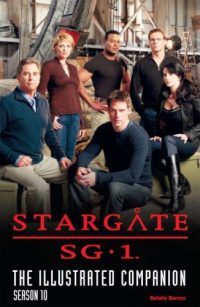 The sixth installment in Titan's popular series includes a look at every episode of Season Ten, interviews with the cast and crew, photos, and more.

Stargate SG-1 follows the adventures of an elite military team as they probe the secrets of the Stargate, a mysterious, ancient portal that allows instantaneous travel to remote planets throughout the universe. In Season Ten, SG-1 -- Mitchell, Jackson, Carter and Teal'c -- welcome a new member to the team in the form of Vala Mal Doran (Farscape's Claudia Black), while facing new challenges and battling Earth's new and seemingly omnipotent enemy, the Ori. This is the official in-depth guide to the show, packed with behind-the-scenes interviews, exclusive pictures and a comprehensive episode guide. From Titan Books