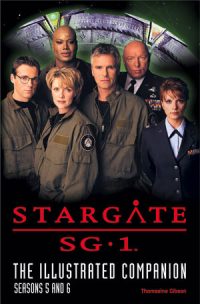 This volume looks at the fifth and sixth seasons of Stargate SG-1, with more great interviews, in-depth story synopses, commentary, and photos.

This is the official companion to Seasons Five and Six of the hit TV series spin-off from the blockbuster action-adventure movie Stargate. Colonel Jack O'Neill, leader of an elite military team tries to learn the secrets of the Stargate, a mysterious ancient portal that allows instantaneous travel to remote planets throughout the universe. Following on from Stargate SG-1: The Illustrated Companion volumes 1 and 2, which covered Seasons One to Four, comes volume 3, coming right up to date, with full details of all the episodes in Seasons Five and Six! Featuring more exclusive new interviews with all the cast and crew, giving the in-depth, inside story of the hit sci-fi show; story synopses are followed by extensive commentary and detailed behind-the-scenes information. From Titan Books

Review by David Read I did not know what to expect when I opened to the first page of the third volume of The Stargate SG-1 Illustrated Companion, covering Seasons Five and Six of the television show. I hadn't had the chance to read the first two, but I suppose I assumed there would be some interesting stories told inside. Maybe a couple inside gags, if I was lucky. But I was pleasantly surprised. The book is introduced by actress Amanda Tapping ("Samantha Carter"), who had apparently spent some time writing the introduction. And it didn't stop there! Throughout the book readers encounter little memoirs from the show's cast and crew. Much of what they had to say was, "Hi there!" and "Hello's," but this were a very nice and unexpected surprise. Each episode from "Enemies" to "Full Circle" has a series of paragraphs dedicated to it, frequently changing perspectives from episode to episode in a balanced palette of angles from the various production departments, including the cast and producers themselves. Many segments feature Peter DeLuise, and, to this reader's delight, served to spice up the reading and keep me going for more. Truth be told, I had the book read in two days -- not because it was short or insubstantial, but because I simply could not put it down. Since I had seen and knew all of Season Five and Six's episodes backwards and forwards, I knew the outlines of the episodes and the genuinely astounding highlights of special effects. This book never ceased to honor those same highlights. Having said this, I was also surprised to find a couple of the details to be incorrect. Being an officially authorized guide, I would have thought this book would have been absent of any and all errors that had to do with the stories. Instead, for example, I read that Zipacna was the Goa'uld responsible for assaulting the Latonan people from orbit and with Jaffa troops in Season Five's "The Sentinel." In the episode it was, of course, the System Lord Svarog (the one with really big speakers). Another distressing factor I was unable to get over was how several key (yet difficult) terms are misspelled, such as the Rite of Malshuraan (Masuraan, according to the text), seen in "Threshold." I wish I could dismiss such mistakes with American versus European language differences. Several nuggets of information in the guide give detailed accounts to the procedures of applying makeup to the actors, prepping them for the long days of shooting on location, and the grueling hours endured by some personnel. Much of the process came directly from the first-hand experience of the author, which didn't resonate with me either way, as I was far more interested in hearing what the cast and crew had to say. I was delighted to encounter a special quote from each episode. For instance, with the episode "Fail Safe" I reminisced with O'Neill's line, "Carter, I can see my house!" Most of these brought a delightful chuckle, and many others reabsorbed me into a touching moment within the episode -- such as with "Full Circle," when Daniel uttered the words "You won't be alone." Also unexpected was a series of illustrations near the end of the book, which cover various items from the Ancient woman in "Frozen" to conceptual designs for Kresh'taa in "The Changeling." These are very nice touches and only serve to further the enjoyment of this book. If I could change one thing about the text I would add more detail, perhaps a complete synopses, to each episode. The book gives no more than a paragraph and "dips your feet" into each one. However, for those who are unable to view Seasons Five and Six, this could be a fair treatment -- just enough to wet the tongue but not spoil the surprises. (If this describes you, be careful in reading some parts of the inside scoop for each show -- it gives away a lot of good stuff!) The book concludes with a great segment by series executive producer and co-creator Brad Wright, as well as a little info on the Gatecon 2002 fan convention, which I'm certain put a smile on the face of many fans. The book has its ups and downs, but I certainly look forward to the release of the next companion. Now if you'll excuse me, I'm going to go and buy the first and second volumes! Rating: * * *