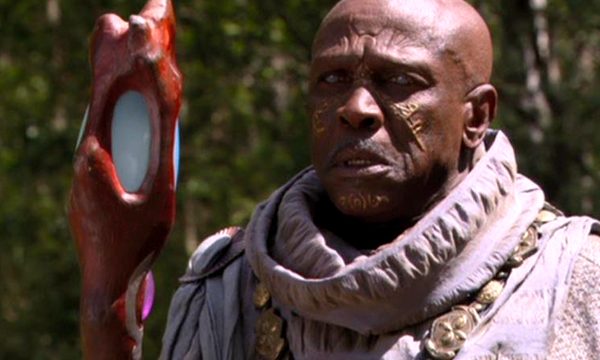 Reassembling a disbanded SG-1 was just the first challenge when Cameron Mitchell showed up at Stargate Command at the beginning of Stargate SG-1 Season Nine. Vala Mal Doran was about to show up, and a dangerous first contact with the Ori. What episodes and character moments do you think were the best of the best?

As part of the Stargate Rewatch project fans all over the world are rewatching all 20 episodes of SG-1‘s ninth season, all through April. We asked you to nominate your favorite episodes, character moments, guest stars, and more from this year. The most nominated in each category make up our official awards ballot, which you can vote on below.

You don’t have to be a Rewatch participant to vote, but please vote only once! Voting will close on April 30, and we’ll announce the winners for the month before we embark on the final season of Stargate SG-1 in May. Come back then to nominate your favorites from Season Ten!

Season nine, only one season left to go. I really enjoyed season nine. After the peak that was season eight, SG-1 came back strong and kept up the tempo. Now that the Goa’uld and Replicators are defeated, what is there to do? Nothing less than to fight ascended beings. Season eight “Threads” was the perfect transition. They couldn’t destroy Anubis and he was just “half-ascended”, and now we have to deal with an entire group of them, who want either worship or death. Great replacement villains to take the place of the Goa’uld and Replicators. I think Julian Sands was… Read more »

the first four episodes were so weak. its like they wrote the show around valas looks and innuendos. these episodes nearly killed the show for me.

I dunno about *all* four episodes, grif…

Vala’s ‘death’ in “Avalon, Pt. II” was still one of the most memorable, gut-wrenching scenes I’ve witnessed on any sci-fi show at that time (regardless of how I felt about her character’s inclusion into SG-1 as a whole.)

The other three, I agree with you..!

How the hell was John Noble ( Meurik – Camelot) not nominated for best guest star.

@medegno51: I wish Vala would have stayed dead. Most annoying character to ever be on SG-1.

Even with the cast changes still a great show!

Yep, I agree; the writers didn’t make me warm up to her character until well into Season Ten. Claudia did do an excellent job with what was given to her at that time, though…

I really love Claudia Black and enjoy her character Vala. Maybe its because I loved Farscape and seeing Claudia on screen with Ben again brings back memories of Farscape.

Re-watching occurred to me that Stargate could have made Farscape and Stargate be in the same universe. John Chricton could’ve have been launched to the other side of the galaxy (not the ORI galaxy) and returned to earth in time to save it from the Goa’uld! Both shows were run by Sci-Fi Channel/SyFy.