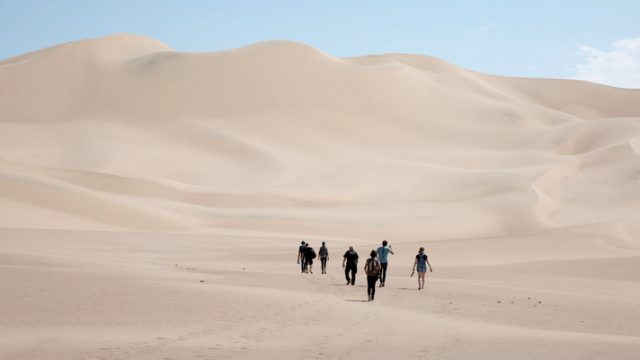 Stargate fans may be heading back to that alien planet where the adventure began — decades before Jack O’Neill and Daniel Jackson stepped through the Stargate for the first time.

The Stargate Origins production staff has been scouting filming locations this month, and among them is a desert location intended to look like the desert planet from the original feature film.

“Aside from the fact that we drove eight hours to bake in the desert sun, our team was able to find spots that matched the world of Abydos,” Origins director Mercedes Bryce Morgan wrote in her new Director’s Diary at Stargate Command.

“We were only out there for an hour but it felt like twelve because it was 120 degrees with zero shade and protection. Every time you take a step, you sink in a foot. Feels like walking through snow drifts … burning hot snow drifts. Already preparing for some rough days on set.”

Abydos was never named on screen in the 1994 movie that starred Kurt Russell and James Spader. But fans of the television show got to know it quite well on Stargate SG-1 when the team visited it again in “Children of the Gods,” “Secrets,” “Forever in a Day,” “Absolute Power” (briefly), and “Full Circle.”

The planet was destroyed by the Goa’uld Anubis’s super-weapon at the climax of SG-1‘s sixth season. 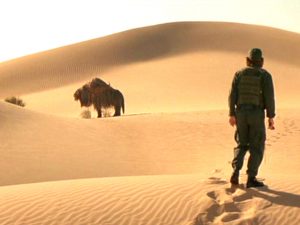 Daniel Jackson’s first trip to Abydos included a close encounter with a mastidge. From Stargate (1994).

In the era of Stargate Origins, of course, the planet is still under the control of the Supreme System Lord Ra, who has enslaved the Abydonians to mine the rare mineral naquadah in support of his empire.

A visit to the planet five or six decades before Earth’s first military mission there could mean that we’ll see Kasuf, future leader of the Abydonians, as a child or a young man.

The desert landscape of Abydos in the 1994 movie came courtesy of sweltering days of shooting in Buttercup Valley outside Yuma, Arizona.

Since the feature film the TV series have filmed on location in the deserts of the southwestern United States twice: once for the Stargate Atlantis episode “Vegas,” and once for the alien desert of SGU‘s “Air, Part 3.” In the latter case the cast and crew filmed at White Sands, New Mexico.

Morgan also writes about production design for Catherine’s bedroom, scouting a warehouse (perhaps where the Stargate itself will be located), casting, and more. Be sure to check out the full Director’s Diary now at Stargate Command!

Well, this is the first time I see a major inconsistency even before the filming. If the rest of the “series” is of the same quality, I’m really expecting the worst.

How do you know it’s an inconsistency?
Because the first time anyone from Earth went to Abydos was in the movie? Well who said anyone’s going to Abydos? Maby it’s a flashback. Maby its a part of a story/local legend that Catherine is told about the sky God Ra and his other world.