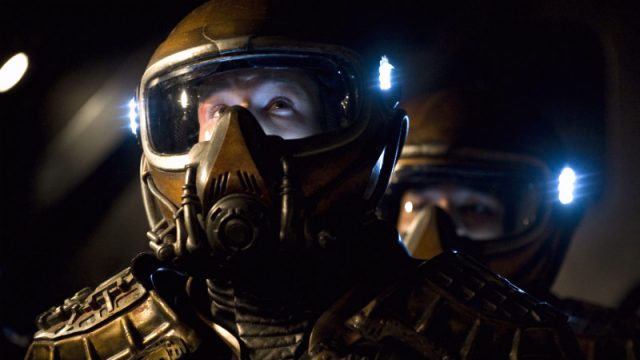 Colonel Young is threatening to kill Telford (and in the process Rush) while Rush is in the hands of the Lucian Alliance. With Rush in Telford’s body, the enemy is forcing him to science his way through helping them dial the ninth chevron, so that they can gain access to the Destiny.

On the ship MSgt. Greer is in full soldier mode to protect Young, while everyone else says this is a terrible idea — because it is. Telford appears to die from lack of oxygen. Killing him and bring him back is the only way to beat the brainwashing, apparently. 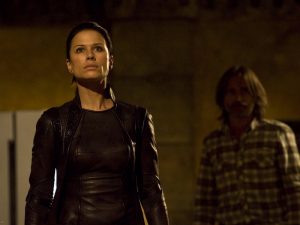 Kiva is ready to get herself an Ancient ship …

Colonel Samantha Carter, on the Hammond, goes to the Alliance secret lair planet in full attack mode. The Alliance starts dialing out … and this is all seeming a little familiar …

The plan on the Destiny is to vent the Gate Room of atmosphere when the Alliance arrives, just like we did with Telford. But when Rush comes along with them, the plan changes … slightly.

The communication stone connection is broken as soon as Rush goes through the gate in Telford’s body. Young allows the Alliance a chance to surrender, but Commander Kiva is prepared. They can open the doors and go in guns blazing. And so the Destiny turns into an early 90s shoot ’em up PC game with smoke, muzzle flashes, and dark corridors.

T.J. is the invaders’ first hostage. I guess it’s a good way to handle the pregnancy without having to have a baby on the ship. And of course, she is the closest thing the ship has to a doctor — and we all know what happens to doctors in Stargate!

Meanwhile Chloe has been shot in the leg while trying to run for cover with Eli. Eli does what he can to help her.

So, here’s the thing: the Lucian Alliance is either really good, or Earth didn’t have its best on Icarus Base … because the Alliance takes control of the ship pretty dang quickly.

To put it kindly, the Alliance is kicking our butts. Kiva offers Colonel Young the opportunity to either join them, or pick a new home planet and G-T-F-O. 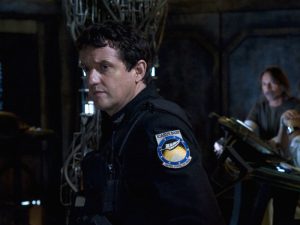 Colonel Young wants to fight … but he really isn’t very good at this.

When Kiva threatens to kill T.J. as a show of how serious she is, Telford (pretending to still be her ally) suggests she has other options. He puts forth a plan to take Destiny‘s control room without killing any of the Earth hostages. Colonel Young’s selfish nature kicks in and he’s suddenly willing to talk.

Young goes back to Earth to discuss with O’Neill what’s going on, and once again O’Neill is acting very un-O’Neill like. They make it seem like O’Neill is pro “screw it and kill some of your people if you have to” — which just doesn’t seem like him. For all the years that he was in charge of SG-1 and the S.G.C. Jack was never “screw it, kill your own people.” He was always “screw your orders — I have a guy in there and I won’t leave him behind.”

This is a big game of who can fake out whom first, with the little added twist of “where did the turn you into a pile of ash beam” come from? Meanwhile Telford, the double agent, tries to lead some Alliance guys into an ambush when out of nowhere a beam of energy / light / Thor’s will comes out and literally disintegrates a guy.

My guess is Franklin? When the Ancient chair poofed him, maybe he became ascended or something? Is he now part of the ship?

Young, ever the dumbass, tries to pull a fast one during a show of good faith. Kiva asks for medical supplies for her side, and Young tries to pass off Greer as a medic to exchange him for T.J. Kiva sees right through his play, gets the medical supplies, keeps T.J. and then kills a red shirt. 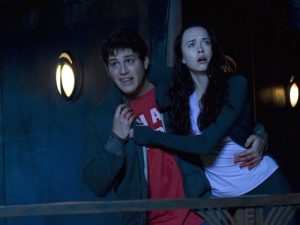 I cannot stress enough Lucian Alliance is totally in charge here. The Tau’ri are playing catch-up, and not doing it well.

In the middle of all this, the ship itself is revolting — spiking the power, cutting off the power. You know, doing what semi-sentient ships do. Or apparently, gamma radiation from a near by pulsar. So now everyone may be hit with the pile-of-ash radiation beams, like the Lucian guy.

During a hostage exchange, it is finally discovered that Eli and Chloe are not among the hostages and are in fact missing. They’ve been wandering around the top levels of the ship, with no active life support, Chloe bleeding out, trying to figure out how to rescue themselves. Chloe and Eli have a heart-to-heart and my ship suffers a bit of a blow. (But I assure you, it still sails strong!)

In the end this two-part episode is a good old psychological drama. There is not a lot of action, but a lot is happening. Lots of negotiation. Lots of problem solving. Lots of double-agenting on Telford’s part.

The Alliance gains control of the ship, but with Rush hiding in the shadows to take it back when Telford gives the signal. Eli and Chloe have gotten word of their position to Young, and are staying put. Scott and Greer do a spacewalk to help get the F.T.L. drive back online. 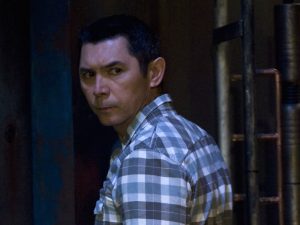 Brainwashed, asphyxiated, revived, and shot at … Telford has about had enough of all this.

And at this point in the story I have the sneaking suspicion this season is going to end on a cliffhanger. There is way too much going on for them to wrap it up before the end of the episode!

Telford and Kiva shoot each other before control can be transferred to Rush. The Lucian second-in-command takes charge, taking Young and Camille hostage. Now Scott and Greer are stuck outside the ship, and it’s up to Eli to get them back inside before the next radiation blast cooks their goose.

There are all kinds of guns going off. Who’s alive? Who’s dead? Who’s not quite dead yet?

What an ending to a season!

I went into this project knowing that the fandom is divided on SGU. I can see both sides of the divide. But I am setting up my camp in the people who enjoy the show. It’s not like SG-1 and SGA. It’s not an action show, the characters are darker, our heroes aren’t entirely good people. But, in truth, this is a binge-worthy show.

In the Next Installment: Destiny‘s crew fights for their lives in the Season Two premiere! Who will live, and who will die?

The guys at GateWorld discussed both episodes, right after they aired, on the GateWorld Podcast.

Seeing things like this make me sad all over again. The Stargate shows are the only television shows that truly made me sad when they ended. Now I ache to have a new show back on the air. Please bring something back. Something good and worthy.

I love this show
Want to see what happens when they reach the other side of open space.

They didn’t just kill and bring back Telford out of nowhere. Young briefly mentioned that he knew when that technique was previously used, and it was used on Teal’c in SG-1’s Threshold when he was brought to death to break Apophis’s brainwashing. The Lucian Alliance inherited tech from the Goa’uld so it makes sense for Young to do this, it’s already established in-universe.