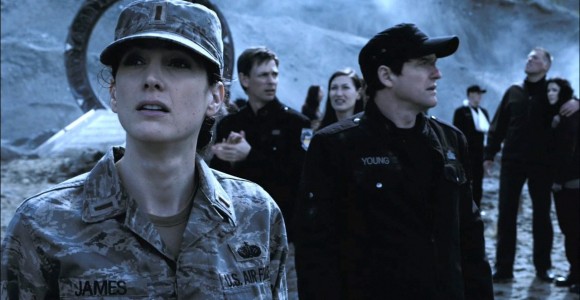 As Destiny's crew continues to battle Lucian Alliance soldiers over control of the ship, T.J. finds herself and her baby transported to a safe place.

Lt. Matthew Scott and MSgt. Ronald Greer fail to reach the airlock before the pulsar's radiation spike ("Incursion, Part 2"), and are feared dead. Instead, they crossed to safety on the underside of Destiny's hull. Scott radios in and Eli Wallace happily admits them through the airlock.

Despite a serious gunshot wound in her leg, Chloe Armstrong joins them. Her bleeding and pain have somehow abated, and the color is returning to her face. The group heads for the makeshift control room where Nicholas Rush and Adam Brody are hiding from the Lucian Alliance forces that have taken control of the ship. Part-way there, Scott and Greer split off. Evading an Alliance search party, the pair activate a kino to covertly surveil on the enemy.

In the Mess, the military members of Destiny's crew are about to be executed on orders from the Alliance's acting commander, Dannic. Varro arrives and reports that Kiva, their commander, is still alive – but more people have been injured, including Destiny's medic, Lt. Tamara Johansen. Hearing this news, Colonel Everett Young attacks Dannic. The soldiers pull him off, and Varro convinces the furious Dannic to let the crew live. They can use some of them to bring medical personnel aboard from Earth via the communication stones.

Camille Wray, Dale Volker, and two others trade bodies with doctors from Earth, led by Dr. Brightman. In the Infirmary they save the life of Colonel David Telford. But Kiva's condition is much worse. T.J. is stable, but her baby is not. Brightman tells a concerned Varro that she doesn't know if either of them will survive the gunshot wound to T.J.'s abdomen.

Awakening in a rustic cabin, T.J. comforts her fussy baby. When Dr. Caine greets her, she realizes that she is back on the planet Destiny visited several months ago, where he and several others elected to stay behind ("Faith"). Caine tells her that the powerful yet unseen alien race they think engineered this entire solar system knew they were there, and saved them from the impending winter by providing a half-dozen of these cabins. Now the aliens have brought the injured T.J. here so her baby would survive.

Back on the ship, Eli and Chloe reach Rush's makeshift control room. With the shields now protecting the dorsal portion of the ship from the deadly pulsar, Destiny has enough power to return to F.T.L. The countdown clock lights up. But Rush recognizes that the pulsar levels the playing field with the Lucian Alliance, and plans to regain control by diverting power from the shields to prevent Destiny from leaving this part of space.

When he learns that Commander Kiva has died, Dannic wants to kill all of Destiny's crew – even though Kiva's original plan had been to find a habitable planet and leave Destiny's personnel there. Ginn, an Alliance scientist, has located a planetary Stargate she can dial. Varro talks Dannic into following Kiva's plan.

Destiny's crew is herded through the Stargate onto a cold, barren, rocky planet. An intense electrical storm approaches. Colonel Young dispatches Lt. Vanessa James and others to find shelter.

Elsewhere on Destiny, a recovering Telford regains consciousness to find a suspicious Simeon – an Alliance soldier – watching him. He questions Telford about what happened when he and Kiva were shot (not aware that she found him betraying them, and they shot each other). Thinking fast, Telford manages to come up with a plausible story. But Simeon may suspect that he is no longer on their side.

An Alliance search team discovers the lab where Rush, Brody, Eli and Chloe are hiding, and radios Dannic. When the countdown clock stops, Dannic orders all but Rush killed. He attacks his own scientist, Ginn, suggesting that if she can't get control back from Rush then she has outlived her usefulness. Varro stops him even as Scott and Greer rescue Rush and the others.

Rush reveals to the Alliance over the radio that he has shifted power from the shields. They will all die in the next pulsar blast unless Dannic surrenders. As Simeon leaves to deal with Rush, Varro tries to convince Dannic that Rush is serious. Enraged, Dannic exiles Varro and those loyal to him to the planet. When they arrive on the planet through the Stargate, Colonel Young is hostile toward him – but Varro reminds him that he is responsible for them being alive. Lt. James locates a series of small caves, and the group finds shelter there as the storm of torrential rain and massive electrical discharges reaches them.

Having ensured that Destiny will not jump into F.T.L., Rush and the others sequester themselves in the best protected part of the ship – the hydroponics lab. Everyone outside of the lab will be killed. Lt. Scott and MSgt. Greer give themselves 15 minutes to bring back the medical team and T.J., ordering Rush, Brody, Eli and Chloe to seal the door if they aren't back in time.

Once in hydroponics, Brody seals the air duct so the atmosphere can't be vented. Scott and Greer shoot their way into sickbay, and find that only Wray (who has since been disconnected from Dr. Brightman) and the unconscious T.J. remain. The baby did not survive. An Alliance team blocks their escape. Realizing they can't get back to hydroponics, Scott orders Brody to seal the door. Dannic overhears on the radio.

Only minutes remain until the next pulsar blast, which will kill everyone but the four in hydroponics. Sending his soldiers to hydroponics, Dannic is certain that Rush is bluffing – that he would never allow the people trapped in the Infirmary to die. Telford and Ginn attempt to convince him that Rush is serious. Watching via kino, Eli tries to convince Rush that Dannic is crazy and will never surrender. Dannic attacks Telford (who can barely stand as it is) and refuses to give up the ship, even if it means they will all die. Ginn shoots Dannic in the back, telling the others that he was insane. She immediately radios their surrender to Rush.

Young, Varro, and their people are retrieved from the planet, and Varro and his men are put into confinement with the other Lucian Alliance survivors.

On Caine's planet, a young couple shows up at his home to see T.J. and her baby. Caine takes her for a walk by the lake, showing her a nebula-like formation lighting the night sky. He says that it showed up the night before she arrived. Caine is apparently aware of T.J.'s injuries back on Destiny, and is in communion with the advanced aliens. Though he's never seen them face-to-face, he intuitively knows their intentions. He tells her that the baby can and will remain with them, to be taken care of – but T.J. must return to Destiny.

Running back to the cabin, T.J. at first refuses to leave her daughter. She tells Caine that the baby's name is Carmen, after the child's grandmother. Caine reassures her, and T.J. says goodbye to her baby. A bright light envelops T.J., who awakens on Destiny. Camille tends to her. T.J. wants to know how long she was off the ship, but Wray says she never left. She has no way of knowing whether her experience was anything more than a dream.

Young goes to see T.J., but she turns away from him in grief. He drowns his pain in Brody's home-made alcohol. Rush tries to sleep, but he's so overwrought he can't even lie down. Alone with a now-sleeping Scott, a thoughtful Chloe examines her nearly healed leg wound. Destiny drops back out of F.T.L. and Brody and Volker scan the area. No deadly pulsars or other immediate threats here.

Needing to get out of the Infirmary and walk, T.J. goes to the Observation Deck. Framed by the panoramic window is the exact, nebula-like formation she saw over the lake. Perhaps it is a sign from the aliens that Carmen is indeed alive.