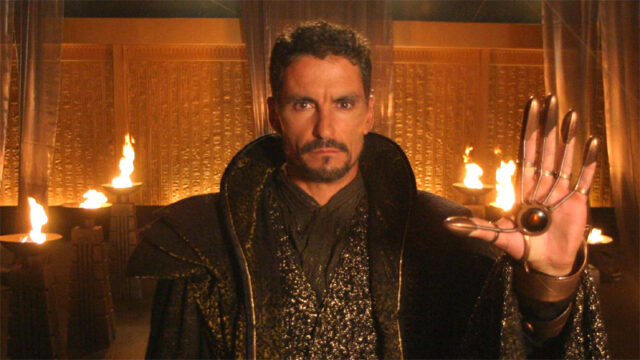 GateWorld’s celebration of the work of Cliff Simon continues this week with a very special episode list! In his seven years on Stargate the actor made 16 appearances as the powerful System Lord Baal — 15 episodes of Stargate SG-1, plus a starring turn in 2008’s Stargate: Continuum.

While it’s tough to pick the best Baal episodes, we’re going to give it a try! Post a comment below and tell us which stories make your Baal Top 7. We’re looking not at the best all-around episodes, but instead the best of Baal.

Here are our top picks for the best Baal stories, presented in the order in which they aired. 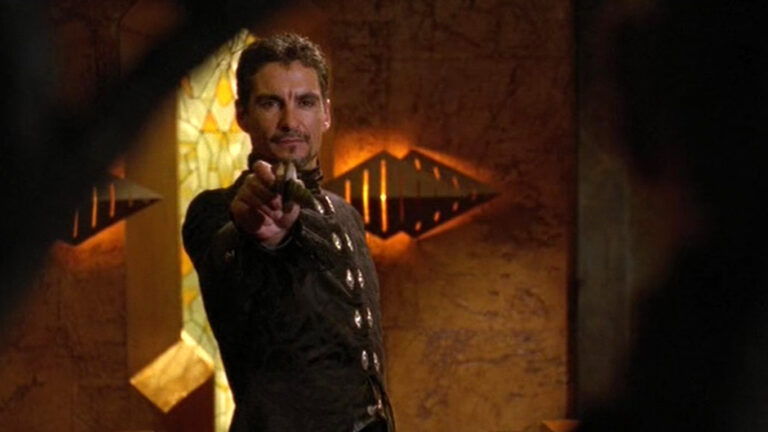 “Abyss” sees Cliff Simon’s big return after Baal’s introduction at the System Lord summit the previous year. Producers used that 2-parter as an opportunity to “audition” new recurring bad guys, and Lord Baal knocked it out of the park.

In this episode, after Jack O’Neill becomes host to a Tok’ra called Kanan, the alien symbiote sneaks onto a planet within Baal’s territory to try and rescue the woman he loves. But when the Tok’ra symbiote is killed, Jack wakes up a prisoner in Baal’s merciless grip. The Goa’uld tortures O’Neill again and again, killing him and reviving him in a sarcophagus.

It’s a gripping drama, with the tension occasionally punctured by Richard Dean Anderson’s quips. (“That’s it? Just ‘Baal?’ As in … Bocce?”) The episode also sees the return of Michael Shanks as an ascended Daniel Jackson — whom Jack begs to end his suffering by stopping Baal from resurrecting him. However Jack is going to get out of it, his time with Baal leaves a permanent grudge between the two. 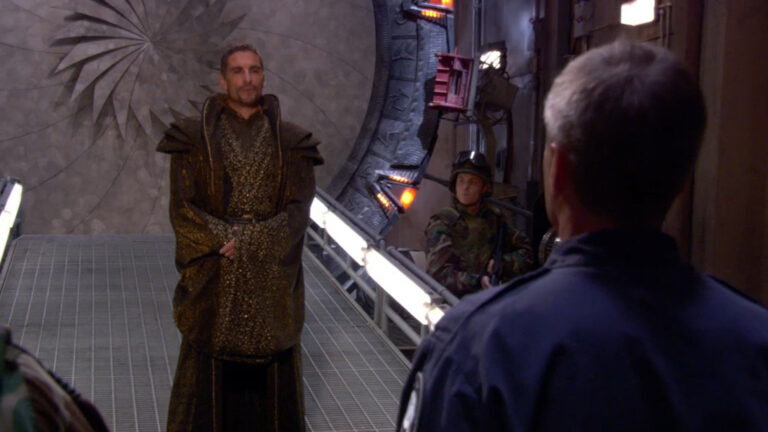 “Zero Hour” sees Jack and Baal square off again, only this time General O’Neill is holding the better hand. SG-1 is missing off-world, and Stargate Command receives intel that Baal has taken the entire team captive.

In the midst of numerous other crises, Jack — newly promoted to Brigadier General and appointed as commander of the S.G.C. — must deal with the Goa’uld System Lord, who appears inside the Gate Room as a hologram to taunt him. He offers a trade: SG-1 in exchange for the disgraced System Lord Camulus, who is a prisoner on Earth.

It’s a bit of cat-and-mouse, played with seethingly hostile banter, as Jack proves that he has what it takes to run the S.G.C. and make the big decisions. He eventually finds that SG-1 was never captured at all … Baal was bluffing, taking advantage of the situation to try and get what he wanted. 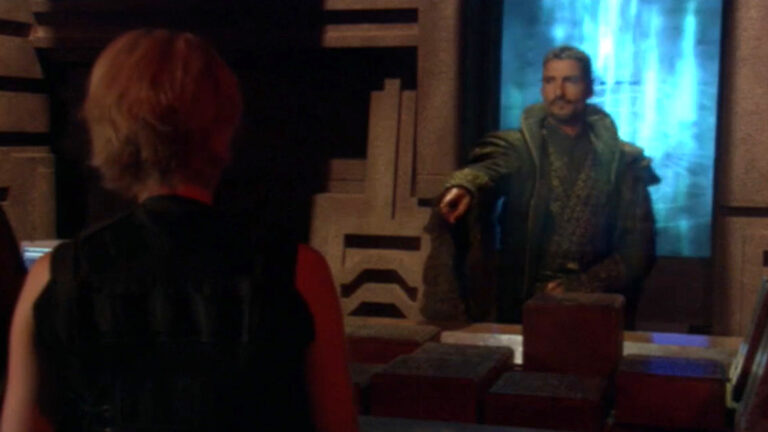 “Reckoning” brings the long struggle against the Goa’uld System Lords — and the Replicators — to a climactic end. Part 2 is particularly fun for Baal fans, as our heroes are forced to grudgingly accept help from their enemy to have a sliver of a chance at defeating the Replicators.

One of Baal’s particular talents is a knowledge of the inner workings of the Stargate’s systems. Remember, it was Baal who modified the “Avenger” computer virus and used it to disrupt gate travel. Now it turns out he is the key to a vital part of the plan to take out the Replicator forces throughout the Milky Way: Baal knows how to get a Stargate to establish a wormhole to every other gate in the galaxy.

Much hilarity ensues as Hologram Baal makes himself a nuisance on the planet Dakara, where Samantha Carter and her Tok’ra father Jacob are trying to crack the code to operate the weapon left behind there by the Ancients. 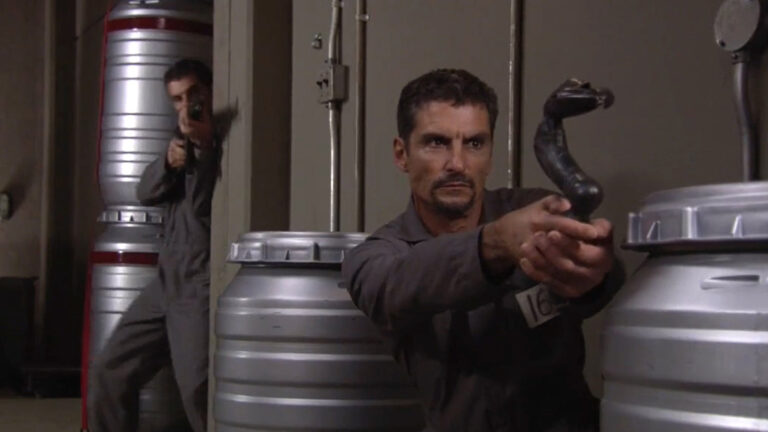 “Insiders” is a tour de force for Cliff Simon, who plays not just one Baal but a whole mess of clones. After shooting down an Al’kesh that shows up in Earth’s atmosphere the team finds none other than Baal himself. And he’s here with an offer.

This Baal claims that he is not a clone but the real (fallen) System Lord, and tells SG-1 that his clones want him dead. With an offer of helping them find Merlin’s anti-Ori weapon, Baal asks for their help rounding up all the clones — many, many Baals who are spread out around the galaxy, each with a locator chip implanted in them.

Wouldn’t you know it, though … Baal is up to no good. Because, he’s Baal. He has a brilliant and self-serving reason for gathering all of his clones together inside Stargate Command, and it’s only a matter of time before he springs his trap! 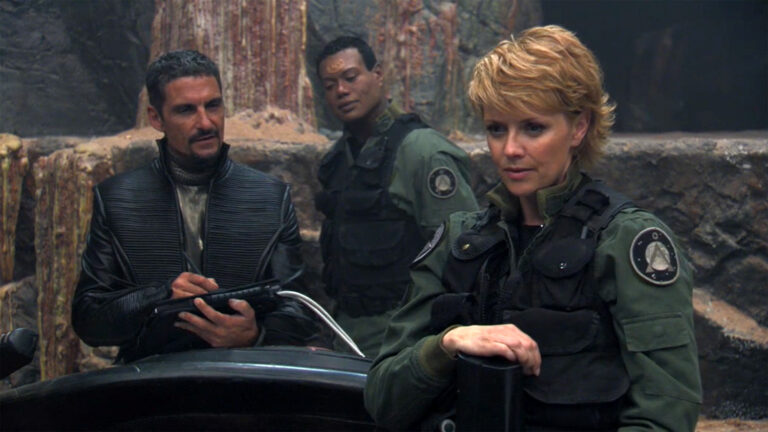 “The Quest” is another unique and memorable 2-parter. This adventure sees Baal actually team up with SG-1 in the pursuit of their common goal: finding Merlin’s weapon to eliminate the threat from the Ori. After months of searching the team has finally found the right planet … but now has to make it through a gauntlet of puzzles and challenges that would test the mettle of the most devoted questers.

Eventually we discover that their local guide isn’t so local, but the Orici Adria in disguise. At the end of the quest the team finds Merlin himself, a brilliant Ancient scientist who has been preserved for centuries in a stasis chamber. Now hunted by Adria and her forces, Daniel and Merlin work on assembling the weapon … while Baal tries to make himself useful in helping Carter reprogram the device that will allow them to escape.

Baal is at his smarmy, “You need me right now” best here. And yeah — this is the one where Sam punches Baal in the face and knocks him on his ass. 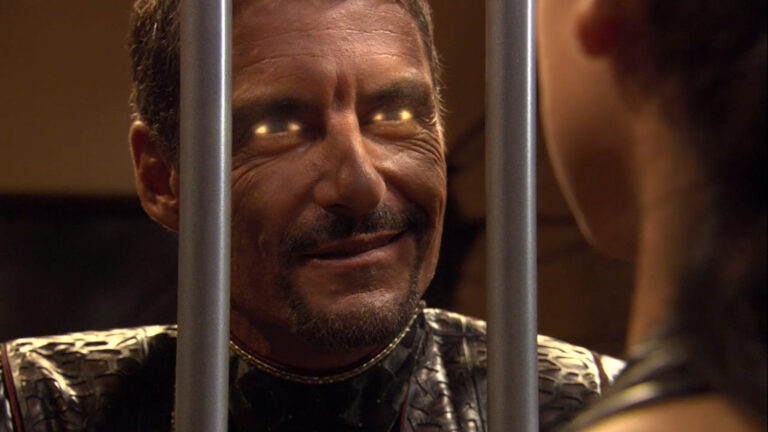 “Dominion” is the penultimate episode of SG-1‘s final season, and it puts the two baddies of Season Ten — Baal and Adria — face to face in a contest of who can be the most evil.

Vala hatches a plan to erase her own memory to fool her Ori-born daughter, in order to lead Adria into a trap. SG-1 is ready and waiting to take the commander of the enemy invasion fleet into custody … but then Baal’s Jaffa show up. Instead of a holding cell on Earth, Adria ends up is a jail cell on board Baal’s mothership. There he plans to take control of her and her powerful army by implanting Adria with a symbiote.

It’s a perfectly … OK plan. Rob Adria of her superpowers, put a symbiote in her, and control the unstoppable forces she commands. Not Baal’s best idea, but it comes pretty close to working — that is, until SG-1 boards the ship, takes out the Baal clone, and recaptures the newly Goa’uld’ed Adria. But before then, it’s a whole lot of fun seeing Cliff Simon doing an Evil-Off with co-star Morena Baccarin. 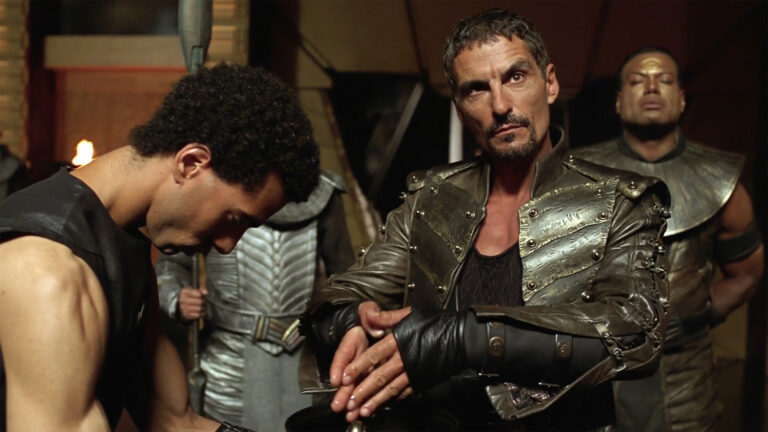 Continuum is the last SG-1 story (so far!), and it is fitting that it’s Baal who drives this story. Baal, last of the System Lords, is faced with his final judgment as SG-1 and the Tok’ra assemble for a lengthy symbiote extraction ceremony. But the villain has one more clone up his sleeve.

Baal has cracked the secret of time travel, and elsewhere another Baal travels back in time to Earth’s past. He bombs the Achilles and the Stargate is lost at sea, and as a result Earth never creates the Stargate program to explore the galaxy. With Jack O’Neill dead and the timeline being rewritten all around them, Sam, Daniel, and Cameron find themselves back on a very different Earth.

Having remade the universe to his liking, it’s only a matter of time before Baal shows up in Earth orbit with a massive mothership, an even bigger fleet, and all the other System Lords at his beck and call. He also has Qetesh — the Goa’uld who has Vala as her host — by his side as his queen.

Baal wins. That’s the end of the movie. Baal wins and rules supreme over the galaxy. Roll credits!

What do you think of our picks? Which are your favorite Baal stories? Post your list in the comments below!

Here’s a list of all 16 of Cliff Simon’s Stargate appearances. Check out Baal’s entry in the Stargate Omnipedia if you want to read a little more to remind yourself of each episode:

The Villain you love to hate and the only system lord that actually seemed to get Jack’s sarcasm. Hard to choose. I’d say the first one “Abyss” that introduced him before he became somewhat “lovable”. I also loved “Continuum”.

loved the series, sorry to see so many people pass away !

It should be top 15 list. He was great in all of them.

One nit to pock. Jack was promoted to one star General. Brigadier, Not 3 stat Lt Gen.

Mea culpa! Thanks for pointing this out.

The Quest is my favourite, closely followed by Insiders. Every time he told the story of Insiders being filmed, he commented on his disappointment at not getting 22 checks!

Ex Deus Machina is also up there for me, and Stronghold aka the episode I knew I was on the dark side, because the plan he explained to Teal’c seemed perfectly sensible to me!

God, this is wretched. We ought to be doing this in 2041 at the very least, not now. Absolutely heartbroken.