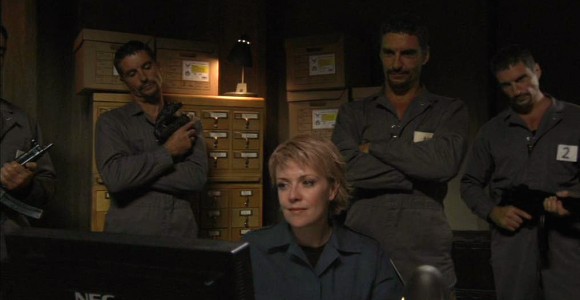 When Baal comes to Earth seeking help, Stargate Command must capture his clones and determine which one is the genuine article.

General Landry, Colonels Mitchell and Carter, Teal'c and Vala Mal Doran discuss the results of the Pegasus expedition. Castiana has a toxic atmosphere that is slowing the search there for Merlin's weapon. They found evidence of stone structures on Sahal, but they were abandoned over 40,000 years ago. Thinking they have missed important information, Dr. Daniel Jackson is in the library on Camelot, hunting through Merlin's books.

When N.O.R.A.D. scrambles two F-16s to intercept the Al'kesh headed straight for Cheyenne Mountain, everyone meets in Control Room. The ship does not respond to hails. Landry gives the F-16s permission to engage. The planes disable the vessel, which crashes in an uninhabited area. SG-1 and Vala pick up the pilot – who turns out to be Baal.

Puzzled that Baal, who has previously come to Earth undetected, would fly right to the S.G.C., Carter scans him and notes the presence of an implanted locator beacon. The mystery deepens as to why, because a jamming screen prevents anyone from locking onto a signal from within the base. Landry explains that Baal will only talk to SG-1.

Vala, drawing upon her time as the Goa'uld Qetesh, suggests Baal's attempt to steal Stargates ("Off the Grid") and to gain control of the Jaffa High Council ("Stronghold") was part of a plan to seize the Ancient device on Dakara – the one used to defeat the Replicators ("Reckoning, Part 2"), and the one supposedly destroyed by the Jaffa ("Threads"). With modification, it could be used to eliminate organic life in most of the Milky Way, making this galaxy useless to the Ori. His clones, fearing they would die, want the real Baal dead. Or so he says. In return for elimination of the clones, he will offer information relevant to the search for Merlin's weapon.

Agent Barrett comes for Baal, under orders to collect the Goa'uld and take him away for questioning. But Landry refuses to turn him over to the N.I.D., citing that Stargate Command has bigger fish to fry than just the threat of the Trust – who supposedly report directly to Baal.

Anubis told Baal of Merlin's weapon and his search for it among the thousands of worlds (addresses of which were obtained by O'Neill after using the Ancient repository of knowledge). Despite his greatest efforts, the half-ascended being was never able to find it. Baal 's information will allow SG-1 to narrow down the selection. He tells them they can find the clones by searching for their locator beacons and the tracking device on his Al'kesh. The clones know about Merlin's weapon and if captured by the Ori, they could reveal the fact that the S.G.C. database contains its location – a threat the Ori would be inclined to eliminate more quickly.

Dr. Bill Leecombines Baal's information with that possessed by S.G.C. Vala mentions her familiarity with a planet that used to be under Camulus's control. SG-1 decides to investigate as a test of Baal's intent and information. Before departure, Landry questions whether Vala should go off-world. Mitchell points out that she could be useful, and that he realized long ago that he controls no one on SG-1. Carter shares his rank, Teal'c is an alien and Jackson is a civilian.

As they prep for the mission, Vala models her new, official uniform. She is allowed only a zat'ni'katel for defense, however. On the planet, she locates a ring platform and devises a plan to get them onto Baal's landed Ha'tak. SG-1 soon captures Baal and returns to the S.G.C. DNA tests suggest both Baals are clones. Teams are dispatched to retrieve the Baals.

Soon 20 clones are in custody. Mitchell, Carter and Vala attempt interrogations again. One Baal reveals that Vala, as Qetesh, attacked his fleet at Selenis, crippling his flagship and killing 10,000 of his best Jaffa. After another unsuccessful attempt to get Landry to turn over even one Baal, Barrett speaks with Carter. Her refusal to help him evokes a surprising tantrum of rage. Citing unresolved issues between them, Barrett dismisses orders and visits a Baal on his own initiative.

In the monitors of the briefing room Mitchell notices a Baal overcoming Barrett and escaping. Landry orders a lock down of levels 15-17. The video feed from the cells is cut. Baal captures Carter.

To regain control, Lee suggests symbiote poison in gas form, but cautions that the ventilation system is not designed to spread gas. Mitchell, Teal'c and Vala take teams to provide distractions until the gas can be released.

Baal threatens Carter with Barrett's life if she does not give him the access code to download the list of planets from the database. She surmises he wants Merlin's weapon to kill not only the Ori, but ascended Ancients. Assuming it's only a matter of time until they regain control of the level, Carter complies.

Siler works to prep the symbiote gas for release. Baal has his plan, however. Locking Carter in a supply room, he gathers his Baals. Landry orders the gas released.

Mitchell frees Carter, who races to where the Baals are assembled. Collectively, they beam out to a waiting Al'kesh. Together their locator beacons allowed their signal to penetrate the S.G.C. jamming screen.

Deciding Baal's plan worked only because of Barrett, they question the agent, thinking (and soon confirming) he has been brainwashed. He is taken into custody.

Carter apologizes for giving Baal the list of addresses, but Landry says that, under the circumstances, she did the right thing.