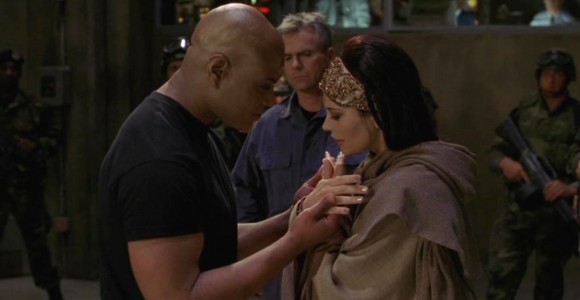 Teal'c is reunited with his lost love – a woman who claims to have found a way to communicate with her symbiote and defeat the Goa'uld.

"Crossroads" in an intriguing episode. I was pleased to see new depth given to the character of Teal'c, who is finally allowed to show some true emotions, ranging from incredibly high spirits -- at one point perhaps even basking in a bit of "afterglow" -- to intense grief.

Yet "Crossroads" was not focused entirely on our favorite Jaffa. Rather, we are given a new Goa'uld enemy, and a new reason to distrust the Tok'ra.

Though we quickly learn of a history between Teal'c and Shau'nac, the Jaffa priestess who travels through the Stargate to the S.G.C. using Master Bra'tac's I.D.C. code, I had difficulty trusting Shau'nac's motivations through most of the episode. Her claims to have established a communication with the larval Goa'uld within her and subsequently to have turned it against the cruel ways of its species were impossible to prove. Like the S.G.C., I was skeptical of her request to be sent to the Tok'ra.

Teal'c's complete trust in Shau'nac could not be disputed. Yet as Shau'nac slowly convinces him to quit the S.G.C. and join her in a rebellion he himself started, my own distrust of her grew ten-fold. Her words had the ring of truth, of believability; but there was something behind those words, something unspoken which activated my own warning lights and made me want to shake Teal'c until he saw those lights as well.

Later it became evident that she was simply a poor, misguided soul who wanted so desperately to make a difference that she was easily swayed into believing she had.

But just what is the tale of Teal'c and Shau'nac? Clearly, their previous relationship had been a romantic one. They might even have been each others' first loves, given the clue that they had been children together. It is also quite obvious throughout "Crossroads" that their love had never actually died, despite Shau'nac becoming a priestess, and even despite Teal'c's marriage to Drey'auc.

I was surprised that no mention of Drey'auc was ever made. Has Teal'c not forgiven her for dissolving their marriage in order to marry another, and thus ensure a more positive future for their son?

I like that these questions can be raised. The character of Teal'c has always been a passionate if stoic one. His passion for what is right drives his loyalty and builds the foundation for the honor his very existence seems to symbolize, but the passion itself has not been explored.

Here, in "Crossroads," that passion takes a romantic turn, and even manages to blind Teal'c to potential risks. That he can trust Shau'nac explicitly leads him to ignore the possibility that she may, indeed, be wrong in her own beliefs. That she might have been tricked by the Goa'uld she had carried within her is not even a consideration.

I liked this challenge to Teal'c's good senses. Even Teal'c can make mistakes in judgment. He is made more real, more human, by this fallibility. The concrete statue is becoming flesh and blood.

In addition to the added dimensions in the character of Teal'c, the newly matured Goa'uld, Tanith, opens up a myriad of possibilities for future episodes. Tanith is directly responsible not only for Shau'nac's and Teal'c's misplaced hopes, but also for Shau'nac's death.

And now we have a known Goa'uld spy among the Tok'ra. Can the Tok'ra truly prevent this spy from damaging, if not destroying their movement against the System Lords? The Tok'ra are as arrogant as their brethren Goa'uld; and I can't help but wonder if that arrogance might be their undoing.

Still other possibilities surround the introduction of Tanith, perhaps the most intriguing of which is Teal'c's promise that they will meet again, spoken through the guise of friendship but charged with Teal'c's rage. Teal'c knows very well that Tanith murdered Shau'nac, and he is eager to seek revenge. Tanith, on the other hand, seems cunningly deceptive in his mutual promise to Teal'c. I can't help but imagine that he holds an equal thirst for blood.

The part of Tanith is well acted. There is a sly glare in his eyes, a sinister smirk in his "friendly" smile. He reminds me somewhat of Caesar, pompous yet insightful and unhindered by traditional morals or ethics. I will be eager to see what this new threat brings to future episodes.

Finally, the Tok'ra, and most particularly the character of Anise, are rapidly losing any credibility they may have had with the S.G.C.

Hebron of Parabel becomes a willing host for Shau'nac's matured Goa'uld, believing in the noble purpose that his action would serve his people. Yet when confronted with Tanith's true nature, Anise casually dismisses Hebron's sacrifice with the simple acknowledgment that he knew the risks. There is no sense of remorse, despite that the Tok'ra had expected Tanith's motives to be deceptive.

Anise continues to use humans as pawns in the Tok'ra's war against the Goa'uld. But does she act alone in her careless disregard of humankind, or is she just the first of the Tok'ra to reveal their true nature?

I enjoyed "Crossroads." This was indeed a dramatic episode, one which explores the "epic" side of Stargate SG-1. So different from the first three episodes of this season (the believable and not so believable adventures of "Small Victories" and "Upgrades," and the dark, philosophical study of "The Other Side"), this week's installment further shows the wide range of capabilities on the part of writers, directors and actors alike.