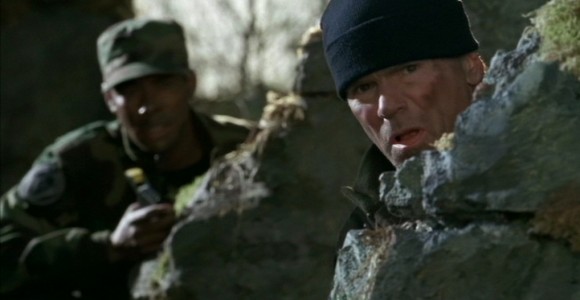 O'Neill and Lieutenant Tyler are ambushed by Goa'uld forces and trapped behind enemy lines – while the rest of their team discover they don't know who Tyler is.

"The Fifth Man" marks Season Five's first disappointment. The idea of an alien's ability to blend in by making himself somehow recognizable to humans is a good one. However, this episode takes that idea too far. A chemically-induced system of camouflage is simply not a strong enough explanation for how an alien, posing as a fictional Lieutenant Tyler, manages to plant three weeks worth of false memories in the minds of SG-1.

There are good moments. This is Stargate SG-1, after all, a series already proven to have some of the best behind-the-scenes as well as on-camera talent available in the industry. However, the overall quality of this episode is severely marred by the weak nature of its principal storyline. I will attempt, therefore, to consider the quality of the various pieces of the episode, rather than focusing too extensively on my complaints about the manner in which those pieces fit together -- or fail to fit together.

Richard Dean Anderson has the opportunity here to highlight Colonel Jack O'Neill's military capabilities. Trapped behind enemy lines, O'Neill must use his training and his wits not only to keep himself alive, but also his injured teammate. It is clear he takes this responsibility very seriously. We never see O'Neill relax. He is always on the alert, weapon in hand, ready to do battle at any moment. It is also quite clear that no matter what happens, he will not abandon one of his men.

However long he has known Lt. Tyler and regardless of his personal opinions of the SG-1 newcomer, O'Neill views Tyler as one of his men, and thus his direct responsibility. He will do whatever it takes to get that man home. It is clear O'Neill is not entirely sure about just who Tyler is, personality-wise, as when the colonel doesn't quite know what to make of Tyler's question about Minnesota being "nice."

But there is nothing personal in his actions here. The bottom line is his duty. Anderson depicts that sense of duty perfectly.

I like Tyler. He's just an all-around likeable guy. I wouldn't mind seeing him in a recurring role -- if he were actually a real person, and not an alien simply donning a persona for protection. But since he's not a real person, I'll say he's pretty good from that perspective as well.

Tyler is a convincing alien in several respects. He is believable as a human -- with quirks. And it is precisely those quirks, such as his confusion with Jack's quips about paperwork and his question about Minnesota being "nice" that make him believable as an alien.

Though I like Tyler, and he can be perceived as believable on two fronts, I still cannot accept the basic concept of his masquerade. What's more, in all his naivete about Earth customs, how can he know enough about military ranks to christen himself a lieutenant? Has that chemical reaction downloaded Earth information into his brain as effectively as it has uploaded the false memories of Tyler into each member of SG-1? Unfortunately, this is where it becomes clear that good pieces in this episode, in and of themselves, will not necessarily result in a good end-product.

Yet I did promise to examine the pieces, so let's gate back to Stargate Command.

Jack's trusty teammates are treated to a severe reality check when they request help for an injured teammate who simply doesn't exist. In some ways, I believe their harsh welcome is perhaps too drastic. Were I to take Hammond's position, the idea of another visit with an alternate reality might be foremost on my mind, in which case I might temper my suspicions about compromised personnel. However, the general has certainly learned not to take anything for granted as far as off-world travel is concerned.

Not only does he know that SGC personnel can be impersonated by aliens ("Foothold") and androids ("Tin Man" and "Double Jeopardy"), he is also well-aware that memories and even mental predispositions can be compromised (as in "Fire and Water" and "Divide and Conquer":). Thus I can accept his militaristic reaction. He places SG-1 under guard as a preemptive strike. They are suspects in a crime not yet committed, and as such are guilty until proven innocent.

The best moments of this episode are those involving the Pentagon's Colonel Simmons, first introduced to us in "Ascension" as a likely replacement for the treasonous Colonel Maybourne. Simmons' investigation of Carter, Jackson and Teal'c suggests interesting possibilities for future episodes. He trusts none of the members of the S.G.C.'s flagship team.

Teal'c is, after all, a Jaffa. Carter has herself been taken over by a Tok'ra ("In the Line of Duty"), and has also harbored an alien being in her home ("Ascension") -- thus her loyalty is clearly questionable. And what about Dr. Jackson?

Last season and again here, we see Pentagon officials proving they want Dr. Jackson off the Stargate project -- at least as far as the exploration of worlds is concerned. Why is this, I wonder? Is it because the non-military-minded Jackson brings ethics into the equation? Simmons' claims that Jackson is emotionally unstable; but I suggest it is rather his clear sense of right and wrong that Simmons dislikes.

Ever since the beginning, the government has demanded that the Stargate project's primary goal must be to obtain the means to defeat the Goa'uld. They want weapons and technology, and men like Simmons want it at any cost. The values Dr. Jackson brings to SG-1 can only get in the way.

Where will this thread go, I wonder? It will be interesting to find out.

Once again, it is the pieces that make this episode worth watching. But don't place too much hope in the whole.