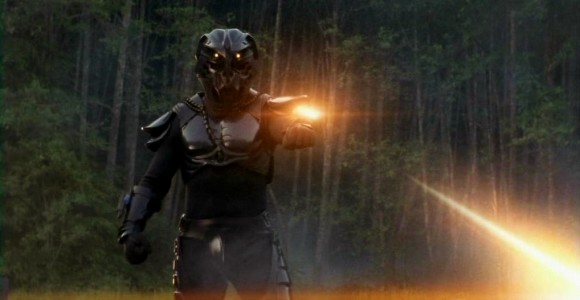 While the S.G.C. investigates a seemingly unstoppable new enemy soldier engineered by Anubis, Daniel leads a team in search of an alien device in Central America.

"Evolution, Part 1" marks the midpoint of the season, the time when American viewers settle in for the long wait until January. While entertaining and generally a good show, the episode is not completely effective as a "remember us in four months!" cliffhanger.

The episode focuses on the emergence of a new type of enemy -- which Sam calls a "super-soldier" -- and how to fight it and defeat it. The super-soldiers are apparently somewhat choosey about who they assassinate, as two pass by Bra'tac instead of killing him, and coincidentally prefer to fire at non-recurring characters. These selective soldiers, with their loudly-crunching shoes and perpetual slow-motion stride, come close to being banal, or at least the brunt of a few well-placed Darth Vader jokes.

However, their impervious technology and their appearance save them from total corniness. The slimy-gooey makeup and translucent eyes are just gross enough to be interesting ... and a little intimidating.

Jack's participation -- or lack of same -- in the first 20 minutes of the episode merits note, as it is never mentioned and completely unexplained. The show would likely benefit by having a real clarification for why the commanding officer of the flagship team is constantly missing important briefings these days ... and even better if it was an explanation that could span several episodes or the better part of the season. If nothing else, this would spare the writers from the task of finding somewhere to stash the character every episode.

Jack's scenes with the Goa'uld Ramius and his Jaffa were amusing, and in themselves almost made up for his mysterious absence. However, it did seem a little forced, as though both Richard Dean Anderson and writer Damian Kindler were trying to cram as much "Jackness" as humanly possible into three or four minutes of screen time. That said, it's very nice to see our favorite Colonel back in action -- leading his team, planning an ambush, working in the field and being concerned about his buddies, instead of standing around slinging off one-liners.

The discovery of the super-soldiers -- and Jacob's theory about their origins -- leads Daniel and Dr. Lee to play Indiana Jones and Marion Ravenwood (you decide which is which) in Honduras, searching for the alien device behind the myth of the Fountain of Youth. Oddly enough, Hammond doesn't send any military backup (plain-clothed or otherwise) with them, and poor Dr. Lee even has to pay for gas out of his own pocket. It's hard being an S.G.C. scientist.

Daniel and Lee did have their moments. It's pretty darn funny seeing Daniel, of all people, warning someone else against touching and accidentally activating something. I guess it's safe to assume that most if not all of his memories have returned.

Unfortunately, the episode's "To Be Continued" moment doesn't have a lot of punch to it. After being captured on other worlds by alien beings for who-knows-what sinister purpose, a kidnapping by Latin American guerrillas -- while still risky business -- seems rather mundane by comparison. And the final scene, where SG-1 learns of Daniel and Lee's abduction to parts unknown, lacks any real drama because it is something that the audience already knows.

What's good about this episode: It sets up a lot of good stories for the future. With these bad-ass super-soldiers wandering around, taking out Goa'uld left and right, how long will it be until SG teams start running up against them? Might Anubis use them to strike at Earth? Are they really as dumb as they seem? And what about this planet the captured soldier is supposedly from? It's also nice to see an on-world and off-world adventure balanced against each other, especially considering all the new information and exposition contained in the story.

What's not so good: At the midpoint of the season, Stargate could really have used an episode that excited, that electrified, that energized people for the rest of the year. "Evolution," while solid and at times downright funny, was not that episode.

This season has brought some wonderful stories to the audience, but none have been more packed with plot than "Evolution." It is so packed, in fact, that it takes a keen ear to pick up on all the references to past events, the story arcs that moved forward, and the new information that sprang up like daisies infesting the lawn. It's almost as if there was a challenge to squeeze, fold, and squash as much plot as possible into the shortest given time. If the second part is as packed as the first, the plot would easily fill a three-parter.

I'm a sucker for plot. I'm also a sucker for well-written characters, and Damian Kindler seems to have a knack for engaging characterization straight out of the gate. The guide Rogelio was friendly, after money in a not-quite-subtle manner, and has the puppy face down pat. His panicked escape attempt was very human. The leader of the kidnappers was another scary one, simply because he didn't seem all that bothered whether his captives lived or died; that kind of individual is always dangerous when provoked.

Dr. Lee is a nice guy who represented the common man well. Daniel is no longer someone who can be easily intimidated, if he ever was. In a situation that would have most of us shaking in our boots, Dr. Lee's reactions were realistic, and highlighted the fact that although SG-1 faces death time and time again, having your life threatened is a chilling experience.

It was good to see Daniel and Dr. Lee being sent alone to Honduras. This is a simple expedition, and taking military personnel along for the ride would only make them stand out in the crowd. As Rogelio mentions, there are ruins all around, and there are frequent visits to them. Daniel's relaxed attitude was the anthropologist at work, falling into local behaviors; his fluent Spanish was understated, just another facet to the depth of characterization.

But that's just one side of the story. I was fascinated by the super-soldier, its automaton behavior, its menacing demeanor. It is not a big leap for Goa'uld technology to advance to the point of armor that can protect from staff weapon fire and zat blasts -- materials science is a vast subject with endless possibilities. What's interesting is that, despite Anubis being depicted as the ultimate in clichéd bad guys, his actions belie the perception. He's a smart tactician, a worthwhile foe. This new warrior, the latest addition to his arsenal, is frightening, and deserving of the reactions it triggered from the S.G.C., Bra'tac and the Tok'ra.

Certain aspects of the show frequently go by unremarked, but not this week. The sets impressed me. The effects impressed me, particularly the inundation of Daniel and Dr. Lee in the underground temple. The super-soldier's physical appearance was nasty, its inhuman and unformed features adding to Anubis' reputation as an "ends justify the means," power-hungry Goa'uld. As for the little touches, either the forests of British Columbia were well-hidden behind what my regular gardening show refers to as "lush architectural planting," or the Honduran jungle set was extremely well built. The waterfall (SFX or real -- who can tell?) was delightful, and the sound of it, even when the falls were a distance away, added to the ambiance.

On reflection, I simply can't find more than a couple of things to grumble about. The finding of the temple in Honduras was a little quick for my liking, as if that part of the story existed only as a stepping stone to the part where Daniel and Dr. Lee were captured. And the inclusion of Bra'tac led to less involvement for Teal'c than I would have liked in an ideal episode. But these really were minor issues.

For a show that supposedly only masquerades as a science fiction drama while actually being a comedy (as was mentioned in the behind the scenes sneak-peek, "The Lowdown"), this week the masquerade was damn near perfect. The little bits of subtle comedy sprinkled through "Evolution" are vintage Stargate, while the drama and tension rattled along at a cracking pace. The story wrapped its tentacles around me so tightly that "To Be Continued" came far too quickly.

"Evolution" was a joy to watch. We had Archaeologist Daniel, Snarky Daniel and Captive Daniel; Science Sam and Planning Sam; Tactician Jack and Concerned Jack; and Jaffa Teal'c, as reliable as the hills. The two plots were cleverly woven together to add to the drama, scenes cutting away again and again in the middle of a threat or just after a revelation. The chopping back and forth between the two storylines added tension and pace to the action, and both plots were engaging.

So what's in store for part two? Daniel is convinced that rescue is on its way, as am I -- this soon after Daniel's return, it's inconceivable that SG-1 won't make every attempt to get him back. But what suffering will he and Dr. Lee go through before help arrives? Will the alien device drive everyone around it more than a little nutso? Will we learn more about the super-soldier threat? Will the bad guys -- black-clad or otherwise -- get their comeuppance? Will Dr. Lee get a first name?

Tune in next week to ... what do you mean we won't see the second half for several months? What kind of daft idea is that!