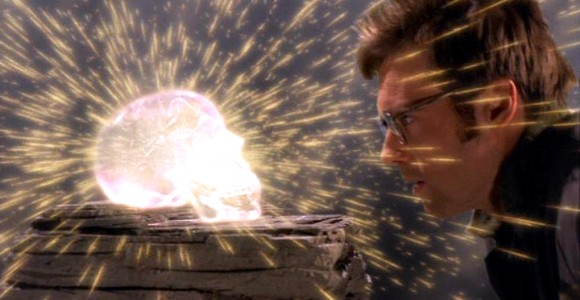 An alien artifact causes Daniel to disappear, and the team looks for help from his institutionalized grandfather – unaware that their friend is still close by.

A M.A.L.P. probe sent to P7X-377 discovers a gigantic pyramid on the apparently deserted planet – a pyramid over 1,000 meters high! Inside, down a long stone walkway and through high levels of neutrino radiation, sits a crystal skull atop a stone platform.

The artifact – carved from a single piece of crystal – appears to be identical to a skull that Daniel Jackson's grandfather, Nicholas Ballard, discovered in Belize, Central America in 1971. SG-1 visits the planet to investigate the object, although the high levels of radiation within the pyramid will limit their trip to just a few minutes.

But when Daniel approaches the object, a circle of energy begins to swirl around him. Radiation levels begin to increase exponentially. Teal'c fires a zat gun at the object, and Daniel is thrown backward to the stone floor. But he is no longer visible to his teammates – he has disappeared. With Major Carter unconscious from the radiation, the three flee back to the Stargate, leaving Daniel invisible and unconscious.

Teal'c's symbiote allows him to recover from the radiation much quicker than the others, and he returns to bring the crystal skull back to Earth. Daniel awakens as Teal'c turns to leave, and discovers that he is invisible – and immaterial, as Teal'c walks right through him.

Daniel follows Teal'c back to the S.G.C., and must try to discover what has happened to him. He considers the possibility that he might be dead, since he is neither hungry nor thirsty. Meanwhile, base scientist Robert Rothman studies the artifact, and O'Neill, Carter, and Teal'c locate Nick Ballard and go to meet him.

What Daniel did not tell them was that his grandfather had a strange experience with the crystal skull from Belize. He said that he was transported by the skull to a gigantic cavern, where he met "giant aliens" who said to him (in ancient Mayan), "The enemy of my enemy is my friend." Ballard was ridiculed by the scientific community, and the aged man is now in a mental institution.

Daniel follows the rest of SG-1 to the hospital and listens as they speak with Nick, trying to convince his grandfather that he should listen to them and tell them everything he knows. Nick is of little help, and insists on seeing the skull himself.

The team brings him back to Cheyenne Mountain and gives him restricted access, telling him nothing of the Stargate or where the second skull was found. When Daniel and Nick are alone together, the old man reveals that he has been able to see and hear him the whole time – probably because he had gone through the same experience. Daniel is not dead, but out of phase with everyone else. He is overjoyed, and the two reconcile their past differences.

Thanks to Daniel's influence through Nick, General Hammond allows the team to return to the planet (along with Nick). Jackson's theory is that Teal'c's zat blast interrupted the crystal skull's teleportation before it was completed, leaving him stuck in some sort of limbo.

Back in the cavern, the skull is replaced and Daniel approaches it. Energy swirls around the group, and all are "transported" to the different phase – all except Teal'c, who sees O'Neill, Carter, and Ballard disappear. He returns to the Stargate.

Daniel is reunited with the others, who can now see him. The giant alien whom Nick had encountered decades ago appears to them – an imposing, ethereal being named Quetzalcoatl. "The enemy of my enemy is my friend," he says. Daniel realizes that the aliens are enemies of the Goa'uld – Teal'c was not transported because of his larval Goa'uld symbiote. "We are enemies of the Goa'uld!" Daniel exclaims.

Rather than return to Earth, Nick agrees to stay with the aliens and exchange knowledge and culture. Daniel says goodbye to his grandfather, hoping that he will one day see him again.