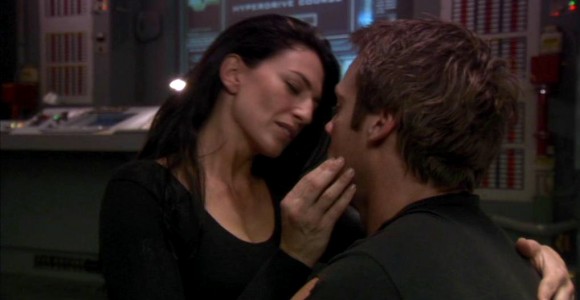 After the Prometheus responds to a distress call from a Goa'uld ship, Daniel Jackson finds himself a captive when Earth's ship is stolen.

The humour that filters into almost every episode of Stargate often doesn't work for me when it's expanded to the full hour. "Urgo," "Wormhole X-Treme!" and "Avenger 2.0" all made me wince rather than laugh. For several years now, "Window Of Opportunity" has held a special place as my favourite funny episode and there's been no sign that it would be toppled off the top spot in the four years since I first saw it. That is, until "Prometheus Unbound" touched down on my television screen.

It's odd, really, that I should like this episode so much. If I were to tick off the points I would expect to see in a favourite episode they would include SG-1 working together, a fascinating story, great character moments, travel through the gate, and mythology of some variety. And yet, Sam and Teal'c are completely absent, Jack is in one scene, there's no mythology, no gate travel, and what is fundamentally quite a simple storyline ... and even then, I love it.

Despite the impression that persists by the end of the episode that it has been one of start-to-finish wit, "Prometheus Unbound" is actually a solid mix of drama and comedy. The underlying story, the theft of the Prometheus and the danger the crew were put in, is very serious. And in addition, Daniel is left alone on the ship, trying to defeat a formidable enemy when he knows he has little chance of success. All of our heroes are in extreme danger, with hazard piling on top of peril as both Daniel and the crew make every effort to rescue each other -- an excellent foundation for tension.

The much-hyped appearance of Claudia Black (of Farscape fame) meant that even with my spoiler-phobic tendencies, I knew she had to appear at some point. Vala, the fruitcake, the liar, the woman who uses everything in her power to get what she wants, is a character who needs a great actor to carry her off. Black manages it with effortless style. Facing off against her was a frazzled, bewildered Daniel, a man pushed to the very edges of the reality he's used to and into Vala's weird, weird world.

The strong acting from Shanks and Black was also essential for success. Their facial expressions and body language save certain scenes from a liberal sprinkling of cheese, and I suspect writer Damian Kindler knew just what these actors could pull off when he wrote such lines for the super-soldier as, "You are very attractive." Poor Daniel -- I've never seen him look quite so stunned.

I wonder, though: Was Vala written before Black was brought on board, or was a part written specifically for her? The creation of such a fascinating character, one who makes such an impression and yet about whom we know very little (that's true) by the time she leaves ... the inspiration must come from somewhere, and I'd love a glimpse into that whirlpool of creativity.

From the very first scene this episode swept me along with it. The banter between Jack and Daniel that is so often missing these days is present in full force. General Hammond is back, so confident in his command, utterly sure of his current position in the universe. His new job seems to have relaxed him enormously -- perhaps it's that he no longer has to watch his teams go off-world every day, never knowing who will come back. As Daniel said, "We miss you around here, sir."

On top of that, there's more of Walter, more of Reynolds, and new characters popping up as if they've always been there. The Stargate universe is totally solid.

There are some nitpicks that keep me from awarding a full four stars, though. While the humour was generally at a level that was just right for me, the Daniel / Vala fight scene tipped over into an excess of slapstick that was a step too far. The poor hiccuping Novak bothered me on a level I'm sure wasn't deliberate. With women as rare as hen's teeth on the show, why is it necessary to introduce one with a quirk? Why not one who is competent and quirkless?

Finally, now we know that one individual can take down the entire crew of Earth's flagship spaceship, we can only hope there is an in-depth review of the Prometheus' security procedures going on at the S.G.C. right now.

"Prometheus Unbound" is a fabulous concoction of laughs, fascinating character insights (particularly for Daniel), and high-level drama, jumbled together in an predictably unpredictable package.