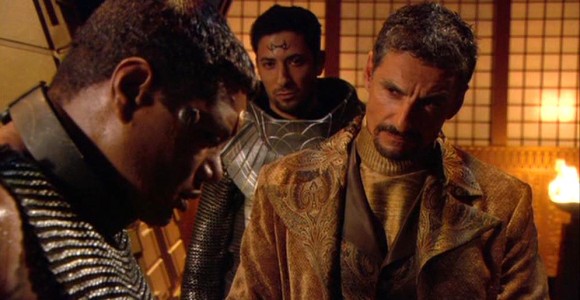 Baal kidnaps Teal'c as part of a plot to brainwash those Jaffa advocating a move toward democracy. Cameron Mitchell learns that an old friend is about to die.

The Jaffa discover that an old enemy is subverting them when Teal'c goes missing. In a classic SG-1 episode, the team acts to save its own. And various characters learn to be true to themselves.

According to Plutarch, the famous Greek maxim from the Sun God Apollo's Oracle at Delphi is "Know Thyself." Another version is from Shakespeare's Hamlet: "This above all: to thine own self be true." But I like Teal'c's version, "To resist the influence of others, knowledge of oneself is most important."

"Stronghold" continues the thread where the Jaffa take their first steps as a free people, and make poor choices before they make good ones. Any race that has to find itself by removing a body organ is in trouble. A symbiote is a Jaffa's immune system. And any nation in such a fundamental transition is bound to have terrible political problems.

Add a dose of religious fanaticism and a compelling strongman waiting in the wings, and you have big trouble in River City.

Ratcheting smarm up to new heights, Baal tries to sell us on the idea that he's trying to fight the Ori by brainwashing as many Jaffa leaders as he can. In the process he captures Teal'c. However, T-man is made of stronger stuff, having been brainwashed in Enemies by Apophis. It doesn't hurt that Chris Judge is an amazing figure of a man, with arms bigger than most people's legs. (Stargate actors are all good-looking people. I keep thinking back to Season One's Brief Candle for Daniel's comment about the Argosians never hearing of the term "unattractive.")

Baal himself should be on the cover of GQ (Goa'uld Quarterly). He's the best-dressed bad guy on TV. Maybe he's the best bad guy ever. He's handsome, smart, sophisticated, rational, and deliciously evil, worse than a used car salesman. He's a very self-aware bad guy with great ambition.

Now Baal admits to Teal'c that he is not a god. What a shocker. And since he's cloned himself in unknown numbers (Ex Deus Machina), the viewers get the satisfaction of killing him every so often. It's like having your cake and eating it too.

"Wait a minute! He's got one of ours!" Which brings me to the wonderful action in an episode that is classic Stargate SG-1. All the familiar components are working for this story. SG teams go through the Stargate. Soldier Sam is back as a military commander giving the troops the rules of engagement and leading the charge. I still think those folks should all wear helmets. The grunts do. Why not the blonde woman? We get to attack a pyramid ship to rescue a team member in the clutches of a Goa'uld. And there are Jaffa everywhere. Baal is torturing poor Teal'c, looking hot in sleeveless chain mail. And Tony Amendola is in the middle of it all out-acting the entire cast.

In a terrific sub-plot, we get to learn what makes Cam Mitchell tick. Action-packed scenes show him nobly risking his life. He's a talented warrior with a death wish, and a hefty dose of survivor's guilt. But Mitchell knows himself enough to admit that he is rash and hotheaded. He ignores the needs of the many (the nation) for the wants of the one (his friend). Thus Mitchell spends the episode studying his navel trying to find himself ... or at least a reason to break security protocols.

Nothing was accomplished telling the guy. There had to be one question on everyone's mind: Why not call the Tok'ra? The snake could fix him so we'd have a new liaison with a tenuous ally. That would justify breaching security regulations. Until General Hammond approved approaching the dying Jacob Carter to become a Tok'ra (The Tok'ra, Part 2), no one thought a telling him was appropriate. So many Earth-bound interests could have compromised Major Ferguson. And leaving the guy plugged in alone was criminally negligent. Do the writers really understand what national security means? Call your local unemployed K.G.B. agent for details.

Watching Mitchell too easily get on board the ship and take out the crew made little sense unless you knew some background. How many viewers remember that the Jaffa, generally speaking, don't work for the Goa'uld anymore? It's tough to get good help without brainwashing the staff. There are even fewer under-Goa'ulds these days. Mitchell rampaging too easily -- and alone -- through the ship needed some reference.

But "Stronghold" is an example of what keeps us watching Stargate SG-1. This action-packed story continues to make us think while using all the elements of a successful episode. Stargate SG-1 has gone back to its roots and finally knows itself again.