For other uses of this name, see Prometheus (disambiguation) 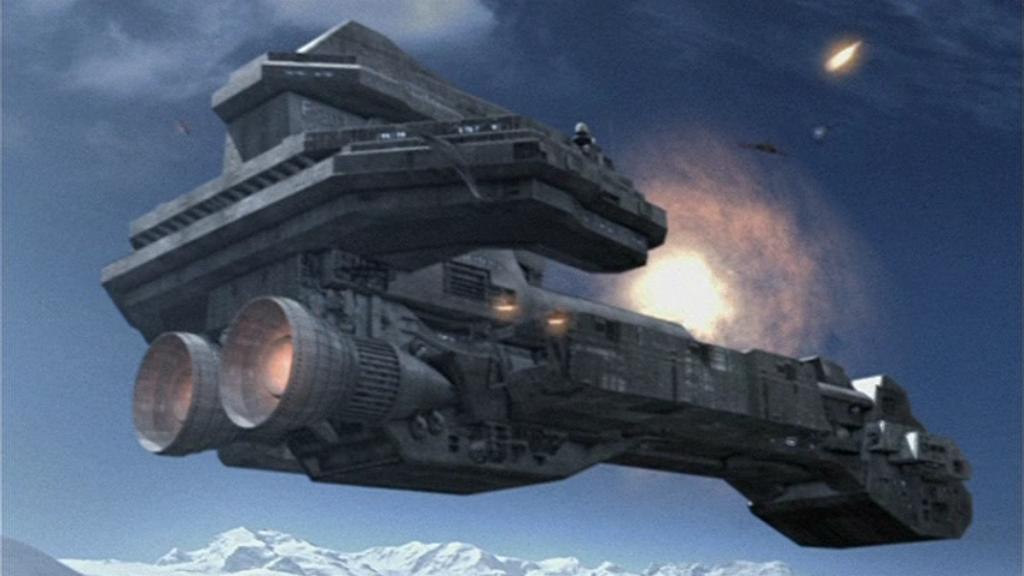 Earth's first large-scale vessel capable of interstellar travel, completed in the sixth year of the Stargate program. The vessel is equipped with hyperspace engines, and can also operate in a planet's atmosphere and land on the surface. The ship takes its name from the top-secret code name used for the development of the X-303, based on the Greek myth of the Titan who stole fire from the gods and gave it to mortals.

Research and development for the Prometheus hyperdrive -- powered by naquadria -- cost the U.S. over $2 billion. Prometheus's main purpose is to serve as a platform for the defense of Earth. The ship can achieve orbit in less than 30 seconds, and utilizing the sub-light engines, can travel at 110,000 miles per second. The corridors of the vessel are constructed of trinium alloys.

Prometheus dwarfs its two predecessors, the X-301 Interceptor and the X-302, which accommodate only two people on each. The ship accommodates eight F-302 fighter craft, which can be deployed and received through a launch bay even when the ship is in flight. It was intended to serve as the prototype for a new fleet of space-faring vessels, and only one of this design was constructed before it was succeeded by the next-generation battlecruiser Daedalus.

Prometheus's first official commanding officer was Colonel William Ronson. Ronson was followed by Colonel Lionel Pendergast following the temporary assignment of General George Hammond to the command chair -- during which time the ship played a central role in defending Earth from Abubis's invasion during the Battle over Antarctica.

Prometheus thrived for three years, carrying out missions during the early stages of humanity's war with the Ori. Enhanced with Asgard shields and weapons, she traveled to Tegalus to retrieve Dr. Daniel Jackson and disable an Ori satellite weapon. But the satellite was prepared for a fight, and after Prometheus launched two initial rockets, the satellite returned the assault with a volley of Ori firepower -- plowing a hole through the nose of the ship.

Pendergast dispatched Blue Squadron to attack the satellite in waves, but its advanced shielding could not be penetrated. Three additional shots at the Prometheus's long neck finally crippled the craft. Pengergast evacuated the crew with the ship's Asgard transport beams, going down with his ship to ensure his crew was safe.

Her back broken, Prometheus split at the neck and exploded. More than 39 of over 115 officers and crew died with her.

Prometheus - The incomplete X-303 is hijacked by Colonel Frank Simmons and his team of rogue N.I.D. agents, along with the Goa'uld Adrian Conrad.
Unnatural Selection - Thor calls on O'Neill and SG-1 to take the Prometheus into Replicator-occupied territory and activate an Asgard trap for the bugs.
Disclosure - Major Davis and General Hammond report on the Prometheus to the international community, indicating that it is the first of several vessels planned.
Memento - Prometheus, along with her new crew, commanding officer Colonel William Ronson, and SG-1, is forced by a systems malfunction to land on an alien planet.
Enemy Mine - General Vidrine oversees the new project to create a fleet of Prometheus-class vessels, and therefore must acquire massive amounts of naquadah -- at any cost.
Grace - Prometheus, on one of its last legs on the trip home from deep space, stops near a gas cloud at one of the cool-down points -- only to meet a hostile alien ship that captures the crew and forces the vessel into the cloud.
Lost City, Part 2 - General George Hammond commands Prometheus in the battle over Antarctica, defending SG-1's Tel'tak from Anubis's fleet.
Ripple Effect - Two verisons of SG-1 fly Prometheus to the black hole that was once Kallana, but the team from an parallel universe hijacks the ship with plans to fly it to Atlantis and steal the city's Z.P.M.
Ethon - Prometheus is destroyed by an Ori satellite weapon while in orbit of Tegalus. Seventy-six of over 115 crewmen survive.