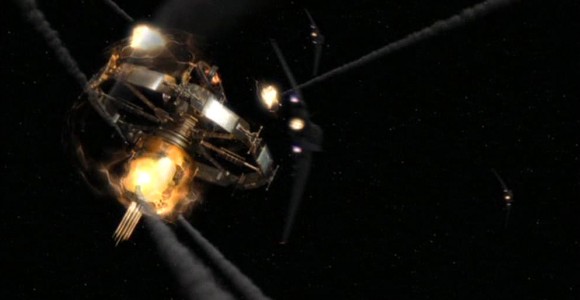 Daniel is imprisoned on a world under the influence of the Ori, and the Prometheus is caught in a firefight when SG-1 tries to rescue him.

In the S.G.C. control room, Dr. Daniel Jackson, Colonel Cameron Mitchell, and Sergeant Walter Harriman listen to a message from Jarrod Kane, an ally from the planet Tegalus ("Icon"). He has gained unauthorized access to his planet's Stargate. Alone and unarmed, he seeks permission to come to Earth.

Kane reveals that Earth has heard nothing from his government for the last five months because of the Ori. As the Rand Protectorate struggled to rebuild last year's coup d'etat and missile attack from rival nation Caledonia, a Prior came to them with the promise of a satellite weapon that would give them power over their enemy. This weapon is now operational and 24 hours ago, it vaporized a Caledonian outpost. The Caledonians have been given five days to submit to Rand and embrace the Ori ... or be exterminated.

Mitchell, Jackson, Lt. Colonel Samantha Carter, and Teal'c discuss the situation with Kane, who brought early schematics of the satellite for them to examine. He hopes Earth will use its more advanced technology to destroy the Ori weapon before something horrible happens. Jackson suggests they have a moral imperative to find a solution, since it was SG-1's travel through the Stargate that originally escalated the Rand-Caledonian war.

With General Landry in Washington, D.C., the team decides to attempt to explain the dangers of the Ori to the Rand Protectorate – and use the Prometheus to destroy the satellite, not only to save Kane's people, but to prevent the spread of Ori technology in the galaxy. Carter discerns from the design schematics that the satellite has no defensive capability, at least not in this early draft of the plans.

Meanwhile, Kane tells Jackson of the Ori plague that swept their world five months ago. The Rand people were forced to choose between their faith and their survival, and many – including his wife Leda, who cared for Daniel when he was trapped there – died because of their refusal to embrace the Ori.

The Rand Protectorate appears to accept Jackson's offer for parlay, but upon their arrival, Kane and Jackson are immediately jailed. President Nadal calls Senator Kane a Caledonia spy and Jackson an abettor, so both will stand trial.

By the time the Prometheus exits hyperspace within striking distance of the Ori satellite, they have heard nothing from Daniel. An attempt to retrieve him via a locator beacon returns only the beacon. President Nadal orders the satellite powered up. Jackson and Kane are brought to the Rand command bunker. Aware of this shift in the satellite's status, Prometheus fires – only to find it shielded. The satellite's energy beam strikes Prometheus and causes considerable damage, cutting right through the ship's advanced, Asgard-designed shields.

The Prometheus's one advantage is that the satellite's energy systems require several minutes to recharge the weapon before it can fire again, giving them time to make another move. Colonel Lionel Pendergast, commander of Prometheus, orders the F-302 fighters, led by Mitchell and Teal'c, into space. As the satellite continues to target Prometheus, the 302s launch missiles, which are ineffective against the device's energy shield. The weapon fires again, and the Earth ship is devastated.

His ship heavily damaged, with no hyperspace capability and even the sub-light engines offline, Pendergast radios the planet's surface and sues for terms of surrender, initially as a way to allow Carter time to restore the sub-light engines. When she cannot restore power within the tight time frame, he orders the evacuation of the Prometheus, setting a rendezvous point in Caledonian territory. Nadal ignores the entreaties and orders the Prometheus destroyed. As the crew rushes to escape transport sites the satellite fires a third and final time, cutting the ship in two and destroying it. Pendergast dies manning the evacuation.

Back in their cells, Kane and Jackson are visited by Commander Goran Pernaux, an acquaintance of Jarrod's but also Nadal's second in command. Jackson tries to explain that the Ori are not gods, but Pernaux himself saw their power with the satellite. Jackson suggests Earth could help Rand build an iris system for their Stargate, or they could bury it, which would prevent further Ori interference. Kane points out that killing the Caledonians in the name of the Ori is not self-defense, but murder.

In the Caledonian capital, Mitchell and Teal'c are reunited with Carter and learn of Pendergast's death. There they meet Caledonian Minister Chaska, who is facing the impending deadline for President Nadal's ultimatum. After study of more recent satellite schematics, Carter learns that its shields are only active when a threat is detected. She devises a plan to use a Caledonian missile and the inertial dampeners of a 302 to emit an electromagnetic pulse over the Rand Protectorate command bunker, which will knock out satellite control long enough for Mitchell and Teal'c in a 302 to destroy the satellite.

President Nadal calls Minister Chaska when they detect the missile launch. She stalls for time by saying it was an accidental firing. He asks her to surrender now, and she refuses.

The EM pulse temporarily wipes out power in the Rand command bunker. Jackson and Kane are brought in to explain, but Jackson tells them he has a way out of this moment. Meanwhile, Mitchell and Teal'c are within striking distance of the satellite. Unexpectedly vulnerable to the Earthers, Nadal agrees to listen to Jackson's suggestion.

Jackson proposes giving the Stargate in Rand territory to the Caledonians. Those who do not wish to embrace the Ori can move to another planet, leaving the Ori no reason to target the Rand Protectorate. When the President and Minister agree, Jackson and Carter order Mitchell and Teal'c not to destroy the satellite. Mitchell reluctantly veers off. But once the satellite is safe, the President orders it be fired at the Caledonian capital. He says that they're Caledonians and they deserve to die for that reason alone.

Unwilling to allow his leader to commit genocide, Pernaux shoots Nadal and he, in turn, is shot by Nadal's guards. Kane manages to defuse the moment after the President dies, and the satellite is shut down. Pernaux declares that the deal remains in effect.

Back in Daniel's office at Stargate Command, Mitchell comes in with beer. He has taken Landry's letter of condolences to Pendergast's family. When Mitchell congratulates Jackson on his skillful solution too the Rand-Caledonian crisis, Daniel reveals that both sides reneged on their agreement when the Caledonian people refused to leave their world. The Stargate has apparently been buried in the resulting rubble of a civilization torn apart.