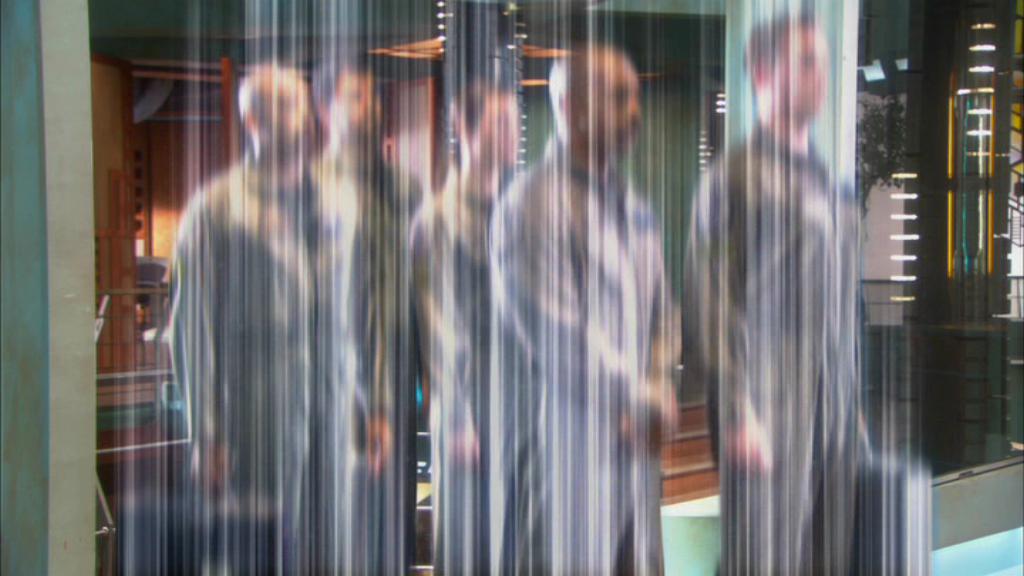 Advanced Asgard transportation technology, capable of moving an object for vast distances from one place to another -- including (but not limited to) ship-to-ship and ship-to-planet transportation. The Asgard routinely use these devices in general travel, often without leaving the chairs in which they sit, allowing their frail bodies more comfort.

Asgard transporters use magnificent energy beams to dematerialize their subjects and send their energy forms careening away at near-light speeds. The visual and auditory pulse emitted by the technology is recognizable to someone familiar with it.

The device can also be installed in artifacts, such as Thor's Hammer, where they automatically transport the target to a preset location.

Thor's Hammer - A form of Asgard transportation technology is built into Thor's hammer device, which sends Teal'c and O'Neill to a nearby cavern after scanning them.
Thor's Chariot - Carter, Jackson and Gairwyn are transported to the Hall of Thor's Might by an Asgard device left on the planet Cimmeria, where they make contact with Thor himself.
Fair Game - O'Neill is beamed aboard Thor's ship, the Beliskner, several times as he discusses plans for negotiating with the Goa'uld. Thor also uses the technology to visit the S.G.C.
Nemesis - When Replicators infest Thor's ship and bring it to Earth, Thor leaves the incoming transporters intact to allow objects to travel in to, but not out of, the Beliskner.
Small Victories - O'Neill and Teal'c are narrowly saved from a horde of Replicators by Asgard transporters.
Red Sky - The Asgard High Council use their transporter technology to beam into the council chamber. A device on the planet K'Tau also takes SG-1 and the local leaders to a chamber where they may communicate with the distant council.
Revelations - Heimdall uses the Asgard transporters to bring SG-1 to the secret research facility, as well as sending the team to Osiris' mothership and back to the cargo ship.
Prometheus - Thor uses his transporters to beam to the Prometheus and discuss a mission in which he'd like SG-1 to take part.
Unnatural Selection - Having presented his plan to SG-1, Thor uses his transporter to return to his ship. He then uses it to take equipment and food from the S.G.C.
Fragile Balance - The Asgard Loki uses the transporter to beam aboard subjects for use in his experiments. O'Neill's clone takes advantage of the opportunity to stop the Asgard scientist.
Chimera - Osiris, still an associate of Anubis, takes advantage of Thor's confiscated memories to use Asgard transporter technology to sneak in and out of Dr. Jackson's home while he is sleeping.
Ethon - Pendergast uses Asgard beams to transport a majority of Prometheus's crew to Caledonia on Tegalus, just before the Prometheus is destroyed by an Ori satellite weapon.