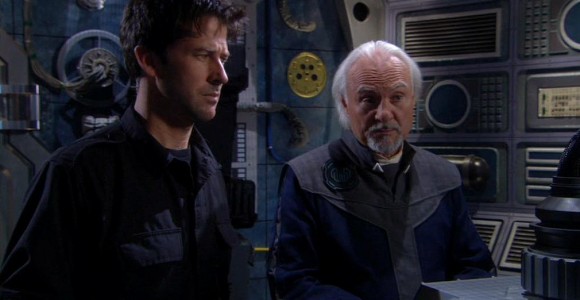 The team discovers the last of a civilization in suspended animation, whose survival is at risk when their station is critically damaged.

Lt. Colonel John Sheppard's team investigates a derelict, centuries-old space station on a distant moon, and inside they find the last remnants of a civilization frozen in stasis. One thousand men, women, and children were put into stasis in an attempt to outlast their enemy, with whom they were at war for many years: the Wraith.

Herick is the first to awaken when the team comes on board. About 35 years of age (before going into stasis), Herick is the technician who created the stasis device for his people. Though he expects to find his wife and son there with him, they are missing. Angry, Herick awakens their leader, Jamus.

After Jamus confesses that they had to take drastic steps to keep the Wraith from finding their sanctuary, and Herick's family was left behind, the young man is understandably distraught. Herick later commits suicide rather than live without his loved ones. But his chosen method sends the old station hurtling toward the atmosphere of the nearby planet, threatening Sheppard's team and the unconscious survivors of their people.

The team cannot possibly save so many people and, hoping to cut their losses, offer Jamus rescue. But he will not go without his people – and will make sure that they do not, either. But the true horror of Jamus's past has yet to be revealed.