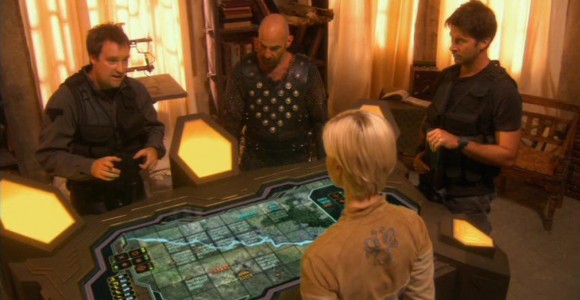 Sheppard and McKay discover that their competitive video game has been controlling a planet of real people, who now stand on the brink of war.

John Sheppard and Rodney McKay go head-to-head in an Ancient computer game discovered in Atlantis, in which they each develop SIMS-style villages on opposite sides of a river in competition with one another. For two years now McKay has been pushing his town ("Geldar") to develop technologically, and as a personal touch fashions their leader character, a beautiful woman named Nola, to look a bit like Samantha Carter.

But what the two do not realize is that this is no game. Their villages, and all the people in them, are real, living on a planet somewhere in the Pegasus Galaxy: M4D-058.

When the team discovers this and visits the planet through the Stargate, they are met by Nola, who immediately recognizes Rodney as their "Oracle." She explains that the Geldarans were given life thousands of years ago, but then their Oracle ceased all communications -- apparently a Lantean, interrupted by the war with the Wraith. Unknowingly, Rodney picked up where he left off.

With a satellite network in orbit to track their development and Ancient technology to communicate with Atlantis, their civilization has all the markings of a Lantean social experiment. While McKay stays with Nola, Sheppard takes Teyla and Ronon to check out his own country across the river.

There they meet Baden, the aggressive leader of Hallona, whom Sheppard had been encouraging to build up his military. He reveals that at the command of Geldar's Oracle, they have begun mining for valuable coal under his town. He believes that the proper response is for the Hallonans to launch an attack.

The two leaders are brought back to Atlantis to learn about the Ancient technology and to have their dispute mediated by Dr. Weir, but things look grim. Thanks to Sheppard and McKay's "game," the two peoples now stand on the brink of war.