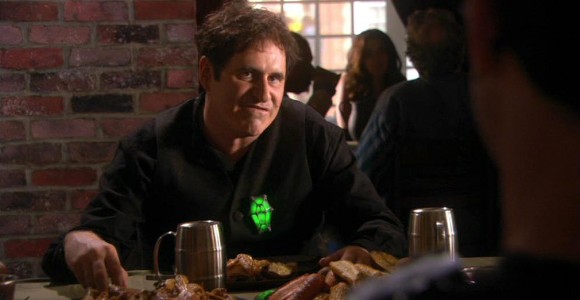 The team finds Lucius Lavin manipulating the people of another hapless planet, using Ancient technology to pose as an invincible hero.

Colonel Sheppard and his team arrive on another world, where they find a village under siege by a band of thugs. With weapons raised, the gang's leader, Haemon, asks Sheppard if he is the "hero" who is rumored to be the one who will stop them from robbing the town and burning it to the ground. Sheppard doesn't know what he's talking about, but the answer soon becomes clear.

Lucius Lavin arrives with an air of triumph, declaring that he is the hero and will protect the village! When the thugs attack him, their blows magically bounce off him. Lucius is wearing an Ancient personal shield emitter.

He makes quick work of the thugs and wins the hearts of the villagers, including the loyal man Amaris and the hesitant and intelligent "Serving Wench."

The team visits with Lucius and his new home, but after saying goodbye they decide to stick around and see if they can learn what Lucius is up to this time. They follow him to a secret meeting with Haemon and his men, learning that Lucius hired them to stage the attack ... and he's not willing to pay them what they agreed to. The men are furious, and one has a broken wrist from the scuffle. Not only that, but they are proud soldiers of the Genii – former members of Cowen's personal guard, who were forced to work for hire after Ladon Radim's coup ("Coup D'etat").

Lucius must finally rely on Colonel Sheppard and the others when an ally of the mercenaries – none other than Acastus Kolya – arrives to deal with Lucius personally. Of course, Kolya has much bigger priorities than the con man: he wants Sheppard's team.