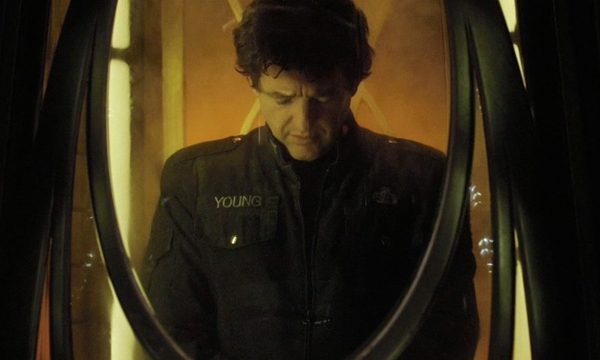 Cut off from every star and every planet in their path, the crew takes a stand against the drone command ships. Meanwhile, Eli comes up with an extreme plan to escape drone space for good.

Our 13-month rewatch of all the Stargate season premieres, finales, and mid-season two-parters concludes this week! If you’re new to our ongoing Stargate Rewatch project, next week is a great time to join us as we focus each month on a single theme.

First up for February: The N.I.D.!

Rewatch “Gauntlet” this week! Then post your comments below, or head over to the “Gauntlet” discussion forum and see what people were saying back in the day. What are your favorite moments?

I was very slow to warm to SGU, but for me, it started really improving the second season. I think the writers started to go back to what worked and realized that bleakness doesn’t go for an entire TV season the way it can go for a 90 minute art film, or BSG (which didn’t appeal to me personally.). By the time Eli was alone in the ship, I REALLY wanted to know what would happen next. It was too bad they didn’t get to tell us.

Thanks for keeping the SGC alive, Darren! I know I am a few weeks behind putting this comment out there, but… I still think that the writers had more planned for TJ’s baby. Now, before everyone gets out of shape, yes I did read what was written about it. Here is my take, though. I think an ancient, or even the obelisk race, scooped up her baby’s SOUL. There, it could grow and learn in a safe environment about “the rules” of ascended beings. My hope was that the child would have felt a need to help her mother (at… Read more »