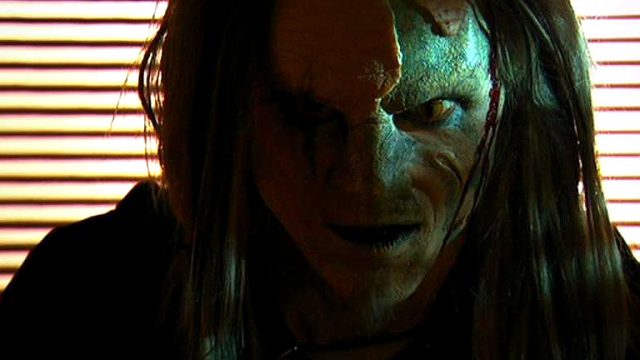 When I set out to write the “Stargate’s Legacy” column my goal was to pick three episodes from each series that have personal meaning to me, and that exemplify the best parts of Stargate as a whole. However, as more and more highlights started piling up, it became clear I couldn’t limit my Stargate Atlantis picks to just three episodes.

So here’s a bonus pick.

While “Childhood’s End,” “Midway,” and “Broken Ties” all present a well-rounded profile of the series’ excellence — the stirring, effortlessly cool, and enigmatic “Vegas” takes the cake as one of my all-time favorite Stargate episodes.

In an alternate universe’s Las Vegas, a string of bizarre murders catch the attention of the local police department — and burned out detective John Sheppard is assigned to the case.

The dried husks of human victims confound Sheppard and his department — although we know them to be the result of Wraith feeding.

While this version of John Sheppard has no prior experience with villains from the Pegasus Galaxy, his intuition is every bit as sharp as the Sheppard we know. He swiftly hones in on a lead and tracks the Wraith invader (disguised in gothic garb) to a gambling ring inside a Vegas hotel.

But the Wraith is onto Sheppard, and a chase ensues. Unsurprisingly, Sheppard is bested at every turn.

Minutes later Richard Woolsey arrives in a government motorcade, summoning Sheppard to Area 51 — where Dr. Rodney McKay introduces Sheppard to Todd the Wraith. McKay is candid, giving Sheppard the lowdown on the Stargate program and the war against the Wraith.

Sheppard is released soon after. On his way home he gets a hunch, and tracks the Wraith to a power grid where the alien perp is powering up a long-range data burst from jerry-rigged Wraith tech. Sheppard intervenes (though at the cost of his own life), and despite his heroics, an interdimensional hole is torn.  The Wraith’s message — containing the location of Earth — is broadcast to a variety of other realities …

Stargate Atlantis‘ penultimate episode pulled no punches, presenting one of the most daring Atlantis stories yet — all while setting the stage for the explosive finale, “Enemy at the Gate” (which brought the Wraith in our universe to Earth’s doorstep).

The series finale needed to deliver an emotionally-resonant and action-packed conclusion, and the best way to lay the groundwork for that extravaganza was to first re-define the status quo — which “Vegas” does in spades.

And while “Vegas” hooks you with its subversive stylings, exotic locations, and high-caliber action, you end up staying for the brilliant character work and stirring portrait of an alternate John Sheppard.

Who is this version of John Sheppard?

In many ways, Detective Sheppard is the same man we know in our reality. The spiked hair, Johnny Cash poster, stylish ride, razor-sharp intelligence, and the tenacity of a true hero — all very familiar.

Yet a botched rescue mission in Afghanistan — an attempt to save someone he loved (against orders) — completely derailed his life. One dishonorable discharge and several years later, Sheppard is a shell of his former self.

And that is where we meet him: rock bottom.

Actor Joe Flanigan does a phenomenal job of balancing a classical, optimistic interpretation of Sheppard with the pain and agony of a broken, lonely man. It showcases an impressive acting range he rarely gets to display in his conventional Atlantis role.

The interplay between Sheppard and McKay is nothing short of brilliant. Even their expository scenes have a magical air of angst, wist, and intrigue. Seeing these two versions meet for the first time — with five years of dramatic irony in the audience’s pocket — is deliciously satisfying. Probably more so than it should be.

Dr. Rodney McKay is a slick, cool, and steady speaker. A genius with a newfound suave.

The technobabble mania and endless fidgeting are largely gone — only resurfacing when put in opposition with his arch nemesis (in every reality), Dr. Radek Zelenka (David Nykl).

This is the man our Rodney McKay could become, if he shed his childish superiority complex and flagrant insecurities. He is almost like a “Rodney 2.0” — which directly juxtaposes Sheppard’s degradation and fall from grace.

Richard Woolsey is about the same — which is entirely unsurprising, as no amount of alternate events could derail the stoicism and prowess of the legendary I.O.A. executive.

He maintains a stable hand at Homeward Command — guiding our heroes through the domestic crisis, and even finding it within himself to crack a self-aware Star Trek joke. (Actor Robert Picardo of course was a regular on Star Trek: Voyager.)

But absent entirely are Teyla Emmagan and Ronon Dex — and, for some, “Vegas” might suffer because of that. I, however, would argue their absence actually helped the episode. We know something is missing, and so does Sheppard. There’s an unsettling absence that thematically enhances the emotional distance that “Vegas” presents on a cold, dour platter.

And it makes that ending all the more lonely and tragic.

Todd the Wraith, delirious from hunger

Sheppard struggles to process this disturbing face-to-face encounter with his nemesis from another reality. And while we’re waiting for him to jump into the cockpit of an F-302 and snap back into action mode — well, this isn’t that kind of story.

“I once met another version of you,” Dr. McKay says to Sheppard.

“It’s amazing how one incident can entirely alter the course of your life. Still, I like to believe you have the same strength of character.”

Truly, it hurts to see a man we care about so deeply in such a rotten malaise (with about as much optimism as a Wraith victim’s dehydrated corpse). But there is just enough empathy infused into the alternate Sheppard’s character that we understand his isolation and anger. This man is, in one word, human.

Ultimately, “Vegas” defines the innovative potential of Stargate — the boundless passion and creativity present in every corner of the writer’s room.

Final confrontation with the Wraith. It doesn’t end well.

The story displays a willingness — even an eagerness — to extend far beyond the show’s well-established comfort zone. It solidified these characters (and actors) as powerhouses of their own — engaging and dimensional enough to carry a foreign, idiosyncratic story that could have easily gone awry.

Writer and director Robert C. Cooper indulges his fancy for character and genre subversion, letting his imagination run wild on location in the urban sprawl of Nevada.

Cooper previously wrote and directed Season Four’s “Doppleganger,” and he’d go on to direct the equally unusual Stargate Universe episodes “Time,” “Human,” and “Malice” — all of which evolved the tone and narrative range of the franchise.

It’s a testament to his artistry that, all these years later, I’m still reflecting on that final montage — scored by Johnny Cash’s “Solitary Man” — pining for a happier ending.

It’s haunting, intriguing, and beautiful filmmaking that sticks with you. And that’s truly all we can ask from a TV show anyway — to be enthralled and entertained in a meaningful way.

The death of John Sheppard

Stargate Atlantis was always my conduit into the greater Stargate universe — my youthful muse, and a seminal influence that crafted my sensibilities as a burgeoning filmmaker. It means the world to me, and while I miss the show almost like I would miss an old friend, its legacy will live on in the heartbeat of Stargate fandom.

I truly enjoyed getting to celebrate its accomplishment with these four entries. And I look forward to doing the same with Stargate Universe in the weeks to come.

“Vegas” was written and directed by Robert C. Cooper, and premiered on SCI FI Channel January 2, 2009.

Vegas episode sucks, without the soundtrack you got NOTHING!