Browse: Home / 2021 / March / Next Stargate Project Might Have Daniel Jackson In It 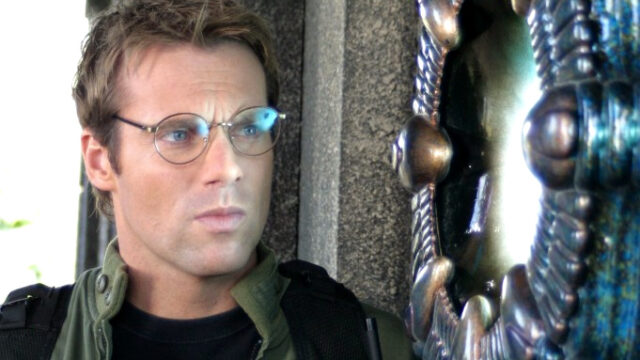 If long-time Stargate creator and executive producer Brad Wright has anything to say about it, the franchise will be back with a brand new show – and Daniel Jackson will likely be a part of it.

Wright teased the news to actor Michael Shanks on his new audio podcast for The Companion, “Brad Wright’s Conversations in Sci-Fi.” Shanks will appear as a special guest in the show’s debut episode, which is set to launch soon. Wright talked about how easy it is to write for Daniel’s voice.

“Writing [for Daniel Jackson] – and I have written you more recently, to tease that – I gotta say how easy it is when you’re writing for a character you’ve written 10,000 lines for,” he said. “I can hear your voice very clearly when I’m typing.”

Wright has been working on a long-gestating Stargate project, which he still hopes will be picked up by a broadcaster or streaming platform – despite the delays caused in part by the COVID-19 pandemic. This new tease appears to indicate that he has at least one script in the works, and that the character Daniel Jackson appears in it. 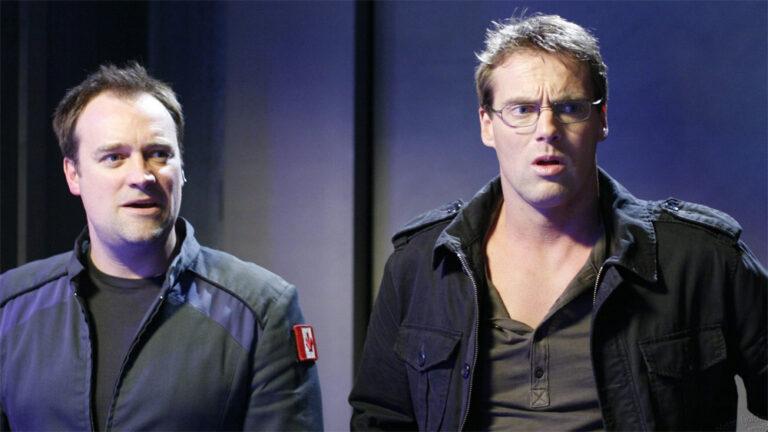 Wright first announced that he was back working with MGM on a new Stargate project in early 2019. This signaled a creative pivot away from Stargate Origins, the 2018 Web series that MGM put out on its own dedicated streaming platform, Stargate Command. Neither Wright nor any of the TV shows’ creative team were involved in that project, which had a lukewarm reception by fans.

While the studio itself has been silent on the development of new Stargate content, long-time producers of the franchise have given fans occasional updates – at least enough to let us know that it’s still a live possibility. In June of 2020 Wright confirmed on Twitter that he was still trying to get the project off the ground, and he reiterated this in a live Q&A with readers of The Companion last November.

As anticipated, however, the impact of the pandemic on global film and television production disrupted the process significantly.

“MGM and I are working on something,” Wright said at the time. “It’s just too early to talk about. And it’s partly too early because there is a pandemic going on. And that’s kind of ground a few things to a halt. But we are working on something. It’s very exciting. It’s something that we have been talking about for a while now. And I love it — I’m excited to have the possibility of making it someday soon.”

Meanwhile, former Stargate executive producer Joseph Mallozzi told fans as recently as September 2020 that he thought the new show was at least getting closer to a pick-up. When asked just how close he thought it was, he said he thought that it was “five chevrons locked.”

What does “five chevrons” mean? Well, assuming Mallozzi is alluding to a standard 7-chevron Stargate address, that puts development progress around 70 percent of the way there. That doesn’t mean that an official announcement is necessarily right around the corner. But it does suggest that MGM may be pitching Wright’s fully-formed idea to networks and potential streaming partners. 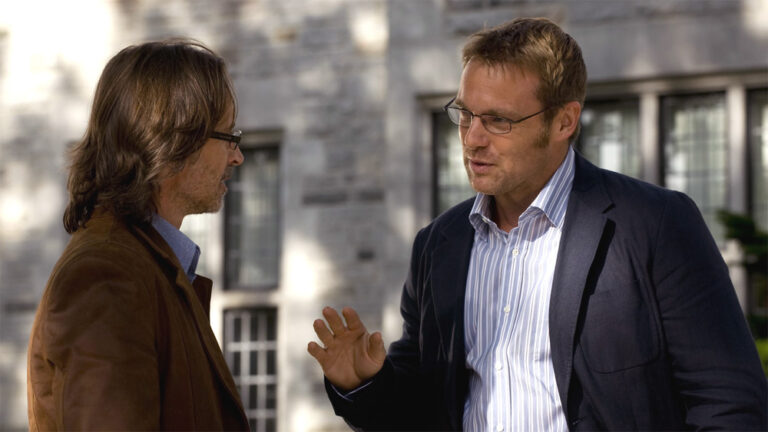 After Stargate he created the sci-fi drama Travelers for Netflix and Canada’s Showcase. His three decades in television also includes the 1990s classic The Outer Limits, for which he wrote and produced.

Wright has also stated publicly that his next Stargate project will be a continuation of the universe he and his creative team built over the course of 14 years – and not a reboot. Shanks’ appearance as Daniel Jackson would certainly help to cement that for long-time fans and newcomers alike.

As an original character from the 1994 Stargate movie (where he was played by James Spader), Jackson has played a role on all three previous series. In addition to co-starring in nine seasons and two movies for SG-1, Shanks put in multiple guest appearances on its spin-off shows. He and his fellow SG-1 co-star Richard Dean Anderson appeared in both shows’ pilot episodes, providing familiar faces to help launch the new teams.

In 2008 Shanks also appeared in SGA‘s mid-season two-parter. And on SGU he had smaller roles in the episodes “Human,” “Subversion,” and “Incursion, Part 1.”

Since his time on Stargate he starred in the supernatural medical drama Saving Hope, as well as the Robert Cooper-directed event series Unspeakable. Shanks also recently had a recurring role in the second season of the Netflix sci-fi drama Altered Carbon, alongside The Falcon and the Winter Soldier star Anthony Mackie. 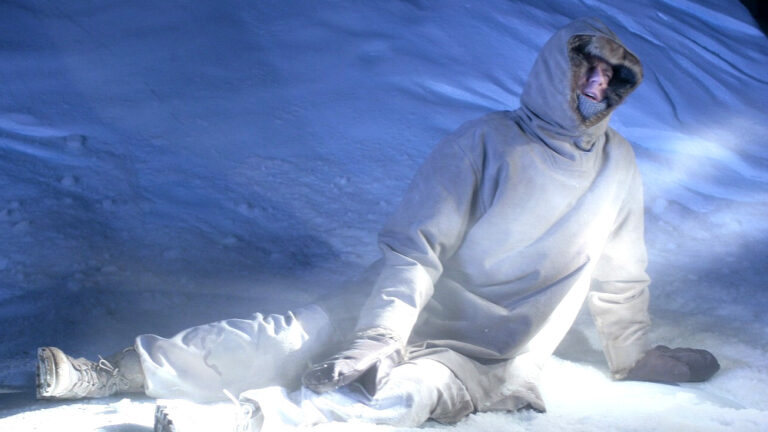 We don’t expect Shanks to be a permanent cast member for a fourth live-action Stargate series, should Wright’s script come to fruition. But with the new project set in the same universe, Daniel and many other Stargate favorites could turn up at any time.

Be sure to catch Brad Wright’s full conversation with Michael Shanks when “Brad Wright’s Conversations in Sci-Fi” officially launches at The Companion. Listen to a teaser trailer for the new podcast here.

“I love science fiction,” Wright says in the trailer. “Watching it, and reading it, and writing it. And apparently talking about it. Over my three long decades in television I have met a ton of talented people. In this series I’m going to sit down with some of them and talk about their careers, share their stories, and take you inside the making of your favorite shows, movies, and books.”

Read more about The Companion and sign up for a free trial at TheCompanion.app. We’ll have more details on the new podcast’s premiere episode when it arrives.

Fingers crossed 🤞 Not expecting anything to happen for years, but just hoping it eventually does!

We are patiently waiting this for YEARS since SGU. So just waiting, huh ?

Creeping ever close to Chevron Six…

I thought there will be original cast! And now I read: maybe in some episodes you can see them? I just hope it won’t be 1 episode, or like 3 times during whole tv show… At the same time: it is not reasonable to expect them in every episode. As OG cast is too old. I also hope to see SGA actors! SG is nothing without OG cast!!! Hope this will be kinda some Ultimate StarGate and will bring out good memories! I got excited when I heard about Nox! Tho ashens I think they are meh, weren’t they like… Read more »

almost all asgards are dead

they make a repository with all Asgards consciousness. Tauri find their ancestors with oryginal body and more healthy Asgards. They clone new asgards.

alot of typs of grey over lol

Is it a sequel? Or alternate? Or something new?
If it’s a sequel I sadly can’t watch the new series, I’ve never been able to watch all of SG1 and like to pretend s7e16 is the last episode.
I’m interested if it’s alternate or new though, but I guess only time will tell what we’re going to get.

Well I love Janet and that’s certainly commendable, but there’s a whole lot of wonderful television after 7×16. I hope you didn’t quit and miss out on the likes of “Lost City,” “Reckoning,” “The Pegasus Project,” … and all of Atlantis!

Brad’s new project sounds like it is a continuation of the existing television universe. So it would probably pick up in the present day, roughly a decade after SGU ended.

I watched until early season 10 years ago when Stargate SG-1 aired, but I get easily bored and depressed with the last three seasons. I know there’s a few good episodes here and there, but over time I just get upset and unable to enjoy it anymore. I wanted to, but I realize forcing myself only made it feel worse. I’m rewatching what I enjoy again now though, I’m currently on late season 4.

I see. Oh well. I’ll see if I change my mind and follow the news on it. Who knows, maybe it’ll fix stuff.

I agree. I’ve watched all three series dozens of times and I enjoy 99.99% of it. My only two wishes for the series would have been a series finale with everyone that was in Unending but throwing in Richard and Don, and possibly some bigger movies to bring in more fans.

Whatever the new Show is about , PLEASE no SGU side plot solution. SGU should have its on conclusion at least in a Mini-Series.

Maybe Jonas would come back? It was not nicely removed from the SG-1

Heyhey stop this US only.
Disclosure also gonna have all of us in it for it to work.
Just like the pandemic what is not an isolated issue.
Or just bomb it down with vpn (“,)

Um… what did any of that mean?

Let’s be honest, I want to know what the ending of Stargate Universe was meant to be

Why should we be honest about you wanting an ending?

I will wait. I want a new series so badly.

Um. Why should I bother when I’ve never been able to finish season 10? Always stop after 7 now. Just want Janet back. So why should I bother with the new series? I don’t know, I just can’t get excited at all. I wish I could go back in time and make them change the whole show from Heroes.

Why is it so unfair? Please tell me why, just why?

I’ll watch if they scrap Heroes and onwards from its existence. While they may not exist for me, I want more Stargate as the next person and if it’s a continuation from season 10 I’ll still only have less than 7 seasons. :(

Question: Is there a way to contact Brad Wright?

The Mash of the scifi world! It would have an instant audience of tens of millions

Not sure why people stopped watching after Janet was killed off. She was a nice character but not a driver in the show. Frankly, I was more upset with losing Jack and Hammond as the seasons went on, although I did like Mitchell and Vala being inserted since I was a fan of Stargate.

Bring the show just back. Just do it. The fans are starving<3

What I would have liked to have taken over from Stargate Origins would be the uncomplicated. Speak, not an explainer like Captain Carter. Also, like in Origins, I would like more “quick humor” in the series. I also wonder if anyone has ever tried to win Kurt Russel back for Stargate.
And finally, please stop letting people on other planets speak English. Daniel Jackson is a language expert, based on the original film with James Spader. Other languages were his job in the film.
Flawless English in the Pegasus Galaxy was the even bigger fail.

make it happen before i am dead!!!!