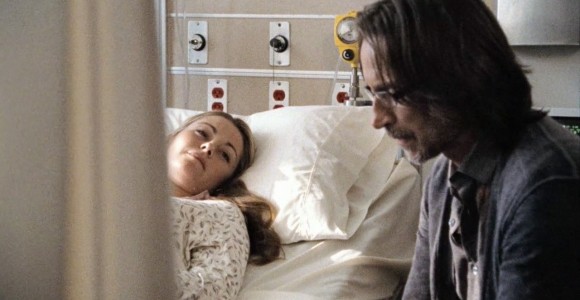 Rush uses the neural interface chair to try and access Destiny's systems, causing him to recall the events which led to his recruitment into the Stargate program.

It's 6:45 a.m., and Dr. Nicholas Rush awakens in his home on Earth. He stares at the blonde woman lying beside him. Getting out of bed, he picks up a notebook and begins writing. He walks into his home office, and looks at the walls – covered with pieces of paper, each, in turn, full of symbols and formulae.

As he moves through his day at the university, streams of Ancient symbols fill his vision. He scribbles in his notebook incessantly. Even when the blonde woman – his wife, Gloria – tells him her cancer is back, he writes in his notebook.

The routine continues. Nicholas even writes down a license plate number that he passes on the street (46YYR9P). When a man named Daniel Jackson comes to recruit him into the top-secret Stargate program, he dismisses Jackson as a figment of his imagination – just like everything else he's experiencing. All of it is getting in the way of what he is trying to find: the master code to unlock Destiny's control systems.

On Destiny, Colonel Everett Young and Eli Wallace find Rush sitting unconscious in the ship's control interface chair, its electrodes interfacing with his mind ("Life"). Adam Brody explains that they created a buffer to slow the flow of information. Only a narrow area of the brain has been targeted. And there's an escape mechanism which should protect Rush from what Dr. Franklin suffered when he sat in the unmodified chair several weeks ago ("Justice"). Lt. Tamara Johansen examines Rush. He is stable, even though his blood pressure and heart rate are elevated.

Desperate to find the master code, Rush continues to relive the tumultuous final weeks of his wife's life. The flow of information is unrelenting. He grows angrier with his failure to uncover a pattern in the data stream. When Jackson reappears, Rush expresses his bitterness. Even though he spent two and a half years, the last years of Gloria's life, working on the problem of the ninth chevron, it was Eli who solved the equations – a "child" with no significant education.

Jackson is sympathetic. He encourages Rush to spend time now with his wife. It is the most important thing he can do right now. But the stress of the circumstances takes its toll. Rush's nose starts to bleed, both within the semi-lucid dream and in real time.

While Rush is in the chair, Eli enters the ship's Mess. He spots Chloe Armstrong, but sits by himself. Desperate to mend their relationship ("Divided"), Chloe joins him. When Destiny drops from F.T.L. flight, the pair head for the gate room. Young is already there. With six hours of planet time before Destiny departs, he orders Lt. Matthew Scott and MSgt. Ronald Greer to suit up. Eli and Chloe volunteer to go, too, when they see the stone ruins on the video sent back by a kino.

The four search the ruins for the reason Destiny stopped at this planet. Eli sends the kino down into a complex of underground tunnels. When he loses the device, he begs Scott for permission to go in and retrieve it. Reluctantly, Scott leads them all down into the dark passages. (Greer reluctantly follows, apparently having a fear of confined spaces.)

After an encounter with a huge cobweb, Chloe wants to return to the surface. Lt. Scott agrees. Suddenly, Greer shouts at Chloe. He fires his weapon, killing an enormous spider behind her. But the concussion triggers the collapse of the ceiling and blocks their exit.

When Colonel Young checks in by radio, Scott reports their dilemma. Two hours remain before Destiny resumes her journey. Lt. Vanessa James and Dale Volker lead a rescue team. Volker and others search the ruins for an alternate exit, and James orders the rest to start removing the rubble. Scott and his team also resume moving debris.

Volker can find no other opening. With only 30 minutes before Destiny jumps, James uses C4 to blast through the rubble. It only makes matters worse. Scott orders Lt. James and her team back to Destiny.

Desperate, Young wants to pull Rush out of the chair. But Brody is afraid it would kill him.

In his dream state, Rush heeds Jackson's advice. In real life he was immersed in his work, and wasn't there for her; now he is repeating the same mistake by ignoring her as a mere memory, and not real. He accompanies Gloria to the park, to a treatment, and to church. All the while, though, he continues to write copious notes. When Jackson returns, he reveals that a source in the Lucian Alliance has found a planet which meets the power requirements for dialing the ninth chevron – the Icarus planet. Beyond frustrated, Rush wants to leave the dream.

Again Jackson encourages Rush to spend time with the dying Gloria. Pondering the date, Rush realizes that throughout the dream he has seen the numerals 4 and 6 paired everywhere – on the clock, as the house address, on the license plate, and on many pieces of notebook paper. It's even in places he knows it is not supposed to be. Even the Psalm read in church was 46.

Gloria, in her hospital room, chides Rush for using her death as an excuse to become callous. Her death is merely the result of one malfunctioning gene. Finally, Rush understands, and the door to escape the dream state appears. Gloria tells him to go. Dazed, he awakens with five minutes left on the countdown clock – five minutes to find a way to stop Destiny from entering F.T.L. and leaving four people behind. Young wants a miracle solution, but Rush hasn't learned enough to crack the ship's master code.