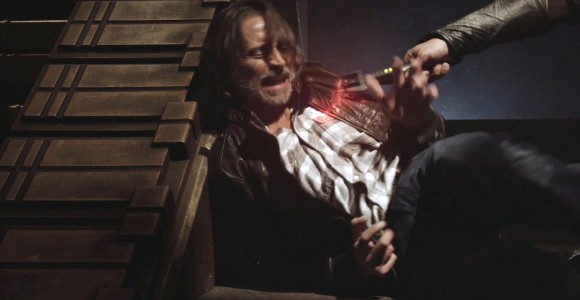 Dr. Rush and Homeworld Command investigate when Colonel Telford is suspected of spying for the Lucian Alliance.

Disturbing images in a dream send Dr. Nicholas Rush to Colonel Everett Young's office. Rush recently used the Ancient communication stones to trade bodies with Colonel David Telford. In his dream, he saw Telford turning over reports on the Icarus Base and ninth chevron research to people who could have been Lucian Alliance operatives. He also flashed on a Goa'uld cargo ship, and the number 314. Rush believes that Telford is the leak who sold out their base, leading to the Alliance's attack ("Air, Part 1").

Recalling Lt. Matthew Scott's bleed-over memories after he swapped with Telford ("Life"), Young quizzes Scott. Concerned there is a pattern, Young shares details of Telford's original mission to infiltrate the Lucian Alliance. Eight months in, Telford became aware of an impeding attack on P2S-569, but chose not to notify Earth in order to maintain his cover – a decision that resulted in the deaths of 37 people. Young considers Telford's decision an act of treason and murder, even though Telford was later cleared of wrong-doing.

Determined to catch Colonel Telford, Rush elects to contact the Lucian Alliance even though he will be on his own with no backup. He replaces Dr. Morrison when he is scheduled to swap bodies with Telford. Telford is surprised to wake up in Rush's body instead of Morrison's. And when Telford leaves the communications room, Young uses the stones himself to brief General Jack O'Neill, head of Homeworld Command, on the situation and their suspicions.

Uncertain of Rush's loyalty, Young suggests having Rush followed. O'Neill assigns a team headed by Dr. Daniel Jackson. They track Rush as he ditches his military escort and heads to Telford's home.

Searching Telford's house for clues, Rush finds a key engraved with 314, the numbers from his dream. The key opens a bank safe deposit box, with only a phone inside. Rush calls a number from the dialing history and asks for a meeting. Soon a black van picks him up and takes him to the same place he saw in his dream. When he can't provide the woman in charge with appropriate answers, Rush is tased. A Goa'uld cargo ship de-cloaks long enough to take the party, including Rush, aboard. Jackson's team moves in, but they are too late. The ship is gone.

Aboard Destiny, Telford has been trying to find out why Rush took Morrison's place in the exchange. He approaches Camille Wray, who is attending a baby shower Chloe Armstrong and some of the other crew are holding for Lt. Tamara Johansen. Eli Wallace is photographing the event. Adam Brody and Dale Volker pull him away and ask if he knows what Rush and Young are doing. Eli has no answers.

Young finally meets Telford himself. They go to Brody's new bar and after a round of the home-brew, Young questions Telford about how he could let 37 people die to keep his cover intact with the Lucian Alliance. Annoyed and defensive, Telford refuses to answer. Convinced he is a traitor and an Alliance spy, Young has Telford confined in a storage room for further questioning.

Using the stones, Young returns to Earth. Jackson briefs him and O'Neill about the people who took Rush. The woman, Kiva, is the daughter of a powerful Lucian Alliance warlord named Masson. Unable to track the cargo ship, they have no idea where Rush has been taken. As the scientist's life is in danger, Jackson suggests terminating the Rush-Telford link. But then they will lose Telford for good; Young and O'Neill decide Telford must be interrogated first.

On Destiny, as Scott and MSgt. Ronald Greer watch through a porthole, Young repeatedly asks Telford where the Alliance has taken Dr. Rush. He goads him with accusations of being a spy, of being responsible for the horrible deaths Icarus personnel suffered in the attack. Finally the two men come to blows, fighting until Greer and Scott intervene. As Scott pulls Young off the prisoner, Greer pins Telford to the floor and rains blows down on him. Young orders them out and continues his interrogation.

On the cargo ship, Rush suffers a much more painful interrogation. He is tased repeatedly as Kiva questions him. He didn't use the required code when calling in, so she knew immediately that he is not Colonel Telford – but likely someone else from Destiny, using the stones. She knows much about the ship and its crew. Finally, Rush confesses his true identity. Pleased to learn who her prisoner is, Kiva is ready to put him to work. Rush is just the person she needs, as the Alliance has located another planet with sufficient naquadria to dial the ninth chevron, and gate to Destiny themselves.

The cargo ship lands at a pyramid on the surface of the Icarus-type planet. There Rush meets Olan, the Alliance's lead scientist on their ninth chevron project. When Kiva demands immediate results, Rush stalls by denigrating Olan's work. Kiva has Olan killed in front of him, and Rush is quickly motivated to start working.

Trying to give Telford a way out, Young again brings up the deaths of 37 people on P2S-569. Surely the Alliance used brainwashing technology to make Telford betray Earth. Outside the room, Wray appeals to Scott's conscience as she demands to see Colonel Telford. Greer blocks her view. Eventually Young leaves, ignoring Wray as he heads for the communications room.

Eli, Volker, and Brody watch via kino as Colonel Young and Corporal Marsden – who has swapped with General O'Neill – join Telford in the interrogation room. Telford reports Young's questionable activities, only to learn that O'Neill has authorized them. The Stargate address revealing Rush's location, which Telford apparently gave Young, was a dead end. Laughing at Young's surprise, Telford tells them it's too late to stop the Alliance. He confesses to joining the Alliance cause and betraying Earth.

O'Neill gives Young permission to do whatever it takes to elicit information, and leaves. Young exits the room and seals the door. Scott admits he has told the broad outlines of what is going on to Camille, who reminds Young that Dr. Rush's life is at stake here, too. It's still his body in that interrogation room. But, watching Telford through the porthole, Young radios Dr. Brody and orders the atmosphere vented from Telford's room. Volker and Eli watch aghast as Brody complies. Telford has five minutes.

The traitor is defiant even as he stares at the stone-faced Young through the porthole. He won't give up the Alliance's location. The air slowly leaks from the compartment.