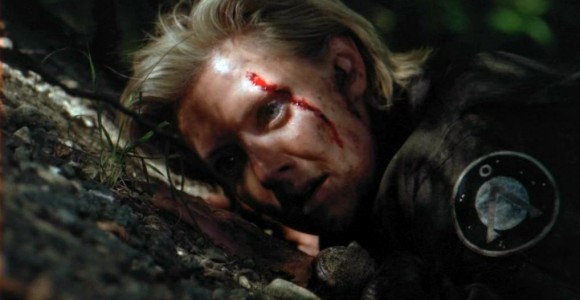 Earth's secret off-world base is attacked by Anubis's forces, and Major Carter finds herself being hunted by the enemy. General Hammond and Jacob Carter make an unnerving discovery about the Earth-Tok'ra alliance.

After last week's soap-operatic attempt to turn your humble review into a repentant diabetic, what I really needed was a good, solid, meat-and-taters episode, something with some intrigue and excitement and the smacking around of characters worth caring about. And -- halleluiah! -- Peter DeLuise and company did indeed deliver with "Death Knell."

"Death Knell" had two facets, each potent in their own special way. When the (new) Alpha Site is attacked by Anubis' drones, the story branches in two directions: Jack and Teal'c try to find an injured Sam before the drone does, and Hammond and Jacob try to find out who brought the baddies there in the first place. Meanwhile, Daniel ... uh ... hmm. Let me get back to you on that.

With dozens of his people missing or dead, Hammond finds himself in the unenviable position of discovering how Anubis discovered the location of the supposedly top-secret base. The officers stationed there are unsure. The Jaffa say it was the fault of the Tok'ra, and the Tok'ra say the same about the Jaffa -- making it obvious that few of them have truly taken Bra'tac's words in "Allegiance" to heart.

The alliance between the Tau'ri, Tok'ra and Jaffa is on shaky ground, and as the episode progresses the foundation crumbles further. Some of the high-ranking Tok'ra, we discover, no longer trust Selmak and Jacob, assuming the former has been corrupted by the dirty human emotions of the latter. The Jaffa are chaffing under the hand of their "new masters." It seems that the death knell is indeed ringing for the partnership between these three peoples.

Of course, things aren't looking too good for Sam either, pursued as she is by one of Anubis' drones. The lack of dialogue during these segments (as in parts of "Grace") was very effective, and Sam's isolation serves to finally make one of these drones appear scary ... although the hand-through-the-rock bit was a teeny bit over the top. Sam's leg injury also seemed to bother her more at some times than others, but we can be kind and attribute that to adrenaline and the all-important survival instinct.

Jack and Teal'c spend most of their time running through the trees, tracking Sam and the drone. It would have been nice to see a little more of them, but they fulfilled their role as the cavalry quite well. And in the end, we get a rare scene of one character comforting another after a harrowing experience. Who doesn't love that?

Another strength of the episode was the wonderful minor characters that were brought in: the young airmen, Delek the snooty Tok'ra, the proud Jaffa. Their interactions with Jacob, Hammond and the rest leant color and texture to the story and reminded us that although the name of the show is Stargate SG-1, it's not just all about them.

What was great about the episode: There was a terrific balance in this story between political intrigue and action. It wasn't bogged down in briefing table discussions, but at the same time it did take some very significant plot-steps forward.

In many ways the focus of "Death Knell" was Jacob. Carmen Argenziano was certainly the star of the show. If his prediction holds true and he won't be around for a while -- well, Sam won't be the only one to miss him.

What wasn't so great: Speaking of missing, where was Janet in this episode? With so many injuries following the Alpha Site attack, it was strange not seeing her or even hearing a passing mention of what she's been up to. Even my mother -- a casual viewer if there ever was one -- asked if the Doc had dropped off the face of the planet.

All in all, a very enjoyable episode, with suspense, drama, and cuteness. And you can't ask for much more than that.

Considering "Death Knell" signaled the end of the Jaffa / Tok'ra / Earth alliance, it would be completely understandable for the audience to expect something loud and dramatic. Unfortunately, what we got was mainly a rather tedious transition from one state to another, a setting up of things to come instead of an episode in its own right. Sure, we no longer have an alliance, but the parties didn't trust one another anyway and had differing goals. And yes, we now have a weapon that can kill a super-soldier, but nothing about that situation changed from the beginning of the episode to the end.

The overwhelming feeling I had at the end of "Death Knell" was one of boredom, and it took a while to think back over the implications of what had happened. Why was I bored? First, there was far more dialogue than we usually have, especially from characters we'd never seen before and in whom we have no emotional investment.

And why was poor Teal'c reduced to stating the exceedingly obvious? "Higher ground is a more defensible position," he said, trying his level best to look wise, and "The depth of the imprint is consistent with someone of Major Carter's size" -- as opposed to the other footprints which "seem to be much larger." Why, oh why, can't this wonderful character be used as more than just decoration? It made far more sense for him to have been back at the S.G.C., especially when he would have been so useful during these pivotal discussions about the alliance. Anyone could have gone with Jack (maybe Daniel, to stop him hanging around like a spare wheel), especially since the super-soldier was making no effort to hide its tracks, and apparently neither was Sam.

A few other oddities. It's been a month since the events of "Evolution," when Daniel and Dr. Lee brought back the Fountain of Youth device. In that time, Sam has been missing on a space ship for several days, and spent several more days in the infirmary. She's had to spend time sorting out Kelowna's problems. She's had her other duties. Yet this new weapon has been built in lightning-fast time. It's unlikely, and Sam saying "We did it quickly" doesn't make it any less unlikely. Perhaps it was the writers saying, "Yes, we know it's unlikely, but we need this plot device."

Also, is there a science fiction rule somewhere that states: "The accuracy of the bad guy's aim must be indirectly proportional to the importance of the character he's aiming at?" That poor red-shirted lieutenant was taken out quite efficiently at the start of Sam's grand adventure -- yet the super-soldier seemed incapable of hitting Sam herself, even when she was a sitting duck at the side of the river. Of course, he had no trouble bringing down the fast-moving U.A.V. with one shot ...

Naturally, there were certain aspects of "Death Knell" that kept me watching. The little detail of Selmak not liking coffee was sweet. Seeing Jack, Daniel and Teal'c arrive at the Alpha Site with a ladder made me chuckle. And the split in the Tok'ra High Council caused by Jacob -- a more independent type of host than they are used to -- was a very nice twist. That Jacob / Selmak chose to return to the Tok'ra even after learning about their declining influence makes me think the alliance isn't unsalvageable -- Jacob is nothing if not pragmatic.

On a visual note, the external shots had a lovely clean feel to them, pure and vibrant. The aftermath of the explosion at the Alpha Site was gritty and realistic. And Sam's make-up was spot on -- no way could she be so perfectly made-up in the field as she's been shown before now, with only a decorous bit of dirt smudged down one cheek. We saw the real impact of the situation on her body and her mind.

The sheer scale of the program now running at the S.G.C. was clearly demonstrated by the high number of people lost at the Alpha Site. It's unlikely Hammond expected to be running such a large command at his age, and, while it's not been explicitly stated, there must be an extended command staff to run the base. How much responsibility does Jack now have in that area?

Looking forward to next week's episode ("Heroes"), the heroism of the people chosen to work for the program is already undeniable. Colonel Riley stayed with the self-destruct mechanism on the Alpha Site to ensure all secret material was destroyed. Sixty-four people were missing and presumed dead by the end of the episode, all of whom knew exactly what they were getting themselves into. It will be interesting to see what an episode entitled "Heroes" can show that we haven't already seen.