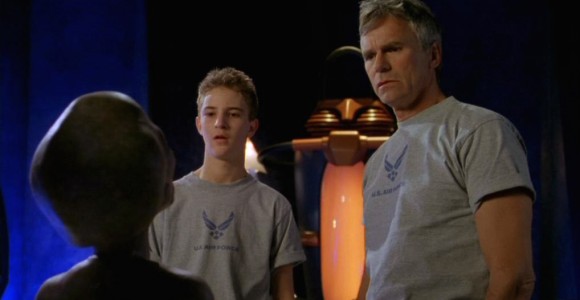 A teenage boy shows up at the S.G.C. claiming to be Jack O'Neill, sending the team on a mission to uncover his true identity.

Turning characters into pint-sized versions of themselves isn't exactly a new concept. But, as the cast and crew of Stargate almost always does with episodes based on not-exactly-new-concepts, they manage to make "Fragile Balance" an entertaining -- although far from perfect --story.

Michael Welch -- the actor behind Mini-Jack -- absolutely, no questions asked, made the episode. Even though Richard Dean Anderson appeared in only a few minutes near the end, this did not have the feeling of the typical "Jack-light" episode; while Anderson wasn't present, Jack was. It's a testament to Welch's talent and also his ability for picking up Anderson / O'Neill mannerisms. While the physical resemblance between the two may be questioned, we recognized "the boy" for who he was from the first hair-rumple.

Of course, not all of Mini-Jack's scripted actions rang as true as Welch's portrayal. This reviewer was skeptical that, upon hearing of his imminent death, the first thing Jack would do after escaping the mountain would be to go for a beer. The entire scene outside the liquor store, where Jack encounters Lt. Colonel Beck, seems to have only three purposes: to establish that Jack is an only child, to establish that Jack served in Operation Proven Force, and to lay the groundwork for how Sam, Teal'c and Daniel later locate him. Even with that in mind, the length and detail of the scene still seems unwarranted.

The end of the episode was also rather perplexing, and maybe a little unsettling. It's true that Mini-Jack had no way to become big again (shades of Tom Hanks) and was "doomed" to grow up naturally. This is an improvement, plot-wise, over killing him off or magically combining the clone with the original. But, even trapped within the body of his 15-year-old self, would Jack really be so willing to leave behind the fight against the Goa'uld, the S.G.C., his friends and his entire life ... all for the chance to go to high school again?

With Anderson's lightened schedule in mind, it might have been more effective to find an excuse to keep Mini-Jack around ... especially as he's already shown to have some authority with the F-302 pilots.

I also have to be critical of Hammond's initial reaction: he was far too dense when coming to realize who "the boy" was. That attitude might have been acceptable in the beginning, but after six years of a command in which he's seen unrelenting weirdness? (As Daniel says, "Stranger things have happened.)" No way. Sorry, George, but you were a bit too slow on the uptake in what very well might have been a time-crucial situation.

None of this means that parts of the episode weren't compelling. The intertwining of the main, somewhat humorous plot with the fate of the Asgard, and the idea that Jack is an advanced being whose DNA is copy-protected -- well, it's what makes the story in "Fragile Balance" special. It's also an interesting insight into Asgard society, knowing that the plight of that race has led one -- Loki -- to mad-scientist-worthy experimentation, not to mention a subtle way of broaching the idea of human cloning in our lifetimes.

It was also enjoyable to watch the characters able to relate to Jack more as Jack and less as Colonel O'Neill. This was especially true when it came to Sam, since she is invariably the one who has to act the most formal around him under normal circumstances. And it was fun taking a more detailed look around Jack's house: the photos, the medals, the "science experiment" in the fridge ...

What's great about this episode: First, Michael Welch. His performance as Jack O'Neill was impressive and believable. Second, the Stargate twist on an old concept: Asgard and human development, and the morality of cloning. You have to admit, it's definitely more inventive than a transporter accident.

What's not so great: Rumor has it that this episode was in the works for some time, dabbled on and then shelved, and this could explain its slightly unpolished feel. What does the title mean, for instance? Is it a throwback to an earlier incarnation of the plot? Could that also explain the extraneous scene with Beck?

Also, a 50-year-old in a 15-year-old body, checking out teenage girls? This seems somehow ... weird. Maybe a little wrong. And certain reactions from the team were off: from now on, whenever something seems weird, don't assume it's a mistake or insanity or someone just messing around. Weird is as weird does at the S.G.C.

Once in a while there's an episode that grows on me more and more each time I watch it, where the little things I missed first time around tickle my funny bone or increase the angst the second time. Where knowing the story allows a study of body language, or what's going on in the background, and I discover there's more happening than I could have guessed. Sure, "Fragile Balance" is not perfect, but after the pure drama and action of the two-part season opener, the humour was greatly appreciated.

SG-1 has always been blessed with high quality guest actors, and in Michael Welch they found a great talent. Young Jack has the mannerisms, speech patterns and facial expressions of the Jack we know and love down pat. He is brilliant -- so much so, in fact, that I didn't miss the real Jack at all. Jack was present, if a little younger, shorter and skinnier than usual. He was perfectly written and perfectly presented. He was bristling with righteous indignation over what had happened to him. He was himself, or so I thought.

However, as the episode continued and Young Jack came face to face with Jack himself, differences were apparent. Over the last few years Jack has gained a sense of stupidity, an apparent denseness that doesn't suit him. The differences in characterization between snarky Jack (young) and confused Jack (old), determined Jack (young) and uncertain Jack (old), in-charge Jack ("That's sir to you") and obtuse Jack ("Carter, I should be irked currently, yes?") were glaring. While we saw flashes of Jack the leader in the older Jack, they were infrequent and sadly missed.

Character development issues aside, there was some nice continuity from Season Two's "The Fifth Race" with Thor's pronouncement that Jack is some kind of advanced human. Although a little confusing -- the last we heard Jonas was the advanced human, according to Nirrti's analysis of his DNA in "Metamorphosis" -- it was a nice touch that gave Jack a sense of feeling special. For a few minutes, at least.

Something I've always liked about the Asgard storyline is that they are depicted as the "Greys," those aliens which are most frequently claimed to be the perpetrators in alien abduction scenarios. "Fragile Balance" brought that convention to the fore, bringing in the records of abductions from Operation Blue Book that Daniel and Teal'c then used to interview abductees. The little details, the descriptions of abductions, weave nicely between Stargate mythology and real-world reports. And having those abductions explained as simply unethical experimentation for a worthy cause, rather than something considerably more sinister, was an interesting direction to take.

What worked best for me in this episode were its wonderful comic moments, with great pacing from Young Jack, Sam and Daniel. The commissary scene with Teal'c's comments on Young Jack's vitality was beautiful; the briefing of the pilots had me giggling uncontrollably. I was surprised at how cheeky Sam was being with Young Jack even after she'd accepted that he was the real thing, but somehow even that fitted into the episode.

Coming a close second in the "what I loved" race was the obvious concern for Jack from his team, first focusing on how to return him to his grown-up state, and then a more serious concern that Jack would die if they couldn't find a solution. The urgency and the worry were palpable. Daniel's "I didn't come all this way to watch him die" was just a verbal example of that worry.

There were a couple of issues that were probably more pronounced than they might have been because of the lighthearted nature of the episode. Once the team realized Young Jack was, in fact, Clone Jack, they seem to lose all interest in saving his life. He wasn't the real deal, was merely a copy, and as such wasn't worth the effort. The abruptness of this change of heart was appalling, and the drama of Young Jack dying was diluted somewhat because the team no longer cared. If they didn't care, why should the viewers? Luckily for Young Jack we already liked him for himself, but it was a shame to take away the drama of the moment.

Second, the end of the episode was rather disturbing. Young Jack may well look fifteen, but he had all of Jack's knowledge and experiences -- he was, in effect, a 50-year-old in a 15-year-old body. As such, Young Jack's lusting after teenage girls was inappropriate and unnecessary. Certainly, there needed to be some sort of resolution as to what a now healthy younger version of Jack could do with his life, but having a USAF colonel going back to high school was unbelievable, even without the insalubrious connotations the final scene brought up.

These two issues are what stops me from giving the episode a higher rating. Overall, the humor was great and the guest star was excellent. Other than the obvious questions such as what will Young Jack be when he grows up, I'm also left wondering what exactly Daniel was looking for in Jack's underwear drawer.