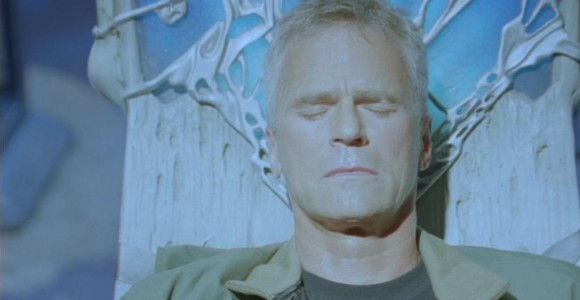 Anubis begins a systematic assault on Earth, and the planet's only hope of salvation depends on whether SG-1 can find the Ancients' mythical Lost City.

"Lost City, Part 2" marks a milestone for Stargate SG-1 and, if rumors about next season are to be believed, even a departure from the norm. With a plot elegant in its simplicity, movie-quality special effects, and an ending that leaves every fan designing a time machine to July, this episode is no doubt one of Stargate's finest hours.

Before I get gushy, let's get the not-great stuff out of the way first. The healing abilities that Jack used to heal Bra'tac were quite convenient -- one might even say contrived. The saving grace that rescues it from the depths of contrivance is the Season Six episode "Frozen," where we first saw the Ancients' healing ability. Still, it would be nice to get an explanation -- or even a theory -- why Jack's symptoms here are so different from those he exhibited in "The Fifth Race.". If I were to continue being picky, I could add that the threat posed to Earth by Anubis' fleet could have been more impressively depicted. We know that there is a fleet hanging just beyond orbit prepared to wipe out every living thing on the planet, and that a Naval carrier group was taken out. However, the menace just doesn't feel menacing. Now that that's out of the way, on to the good parts. The visual effects in this episode deserve mention right up front -- and I'm not easily impressed by shiny lights and things blowing up. Exploding spaceships are generally about as appealing to me as The Sci-Fi Channel's myriad promo bumpers. Here, I found myself leaning towards the television screen during the battle scene, trying to watch every pair of dog-fighting gliders and Al'kesh. The mysterious Ancient weapon was also stupendously neat, more imaginative than a single laser shot into the heavens and, well, pretty. The moment of Anubis' defeat was triumphant, epic, and filled with warm fuzzies. Of course, I'll believe that Anubis is actually out the picture about the same time I believe that Furlings look like Ewoks. Part two marks an interesting contrast to part one in terms of Jack's presence. In part one, the focus of the story is very much on him -- the beer-adoring martyr we've come to know and love. In part two, the lights are on but it's not a given that someone's home, as Richard Dean Anderson reprises his MacGyver role in fine idiot-savant style. Still, he's with-it enough to share a touching moment with Teal'c that no doubt made some fans' season. Part two also continues this season's theme of Sam in a leadership role, a mantel she carries very gracefully. It's obvious she's been waiting for years just for the excuse to give Jack an order. Dr. Weir's backbone grows more solid in this episode, setting her up for a potentially likeable character in Stargate Atlantis, her anti-military tendencies aside. She has a sense of humor, and in a universe where the bad guys rarely crack a smile that makes her a character that we can admire. Han Solo jokes aside, the cliffhanger ending was unexpected, yet somehow not surprising. For one, there simply wasn't time to deal with Jack's malady after Anubis' defeat without it being too much of an anti-climax; a timely appearance by Thor would have set millions of pairs of eyes in an exasperatedly-rolling motion. And in a story full of uncertainty and questions unanswered, it's fitting. It's also emotional: Amanda Tapping's performance in the final scene was particularly heart-rending, poignant to say the least. With fine performances by the entire regular cast, plus guest stars William Devane, Tony Amendola, and even General Jumper, "Lost City, Part 2" is an edgy, stirring ending to a season with several ups and downs. Thankfully, there were more of the former than the latter, with plenty of pizzazz to keep us wringing our hands until the July premiere. Fine work.