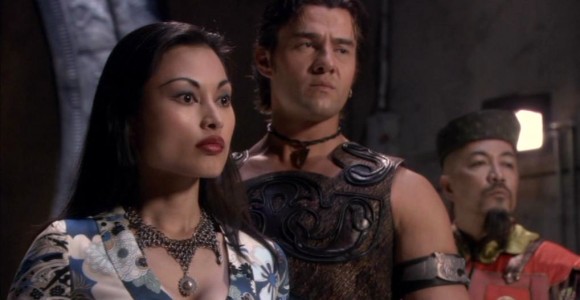 As Jack decides to accept the promotion to brigadier general, and as his first act is to promote Sam Carter to lieutenant colonel, "New Order" gives Stargate itself a promotion -- a shot in the arm if you will. While some series making it into an eighth season might be tempted to go through a complete reinvention, thereby alienating old fans and confusing new viewers (and you know who you are), Stargate's creative team is smarter than that. They know to stick with what works, only -- as Emeril might say -- kicking it up a notch.

The first and most important thing: Unlike many Stargate two-parters, "New Order" doesn't feel like two separate stories linked by the smallest of plot twists. Instead, it has the seamless two-hour feel of a television pilot, but without the pestering matter of introducing new characters and concepts. Joseph Mallozzi, Paul Mullie and Robert C. Cooper stick with established storylines -- the Replicators, the Asgard, the Goa'uld -- while picking up where "Lost City" left off: Anubis vanquished, a lost outpost found, and Jack a ... Jacksicle.

Several other themes continue from previous seasons into the eighth, such as Sam's propensity for appealing to men with stalkerish tendencies and the obsessive focus of Stargate fans. Also: the inability of the Asgard to prove that they're actually as smart as everyone keeps telling us they are. Thor is often lauded (or criticized) for his timing, but it's his actions that provide some of the major tension in the episode. The sad thing is that his moments of super-smart-alien stupidity are pretty much accepted by this point. (I only smacked my face with my palm once.)

But that's the only thing about "New Order" that was even close to sad. Most of the two hours was spent sitting on the edge of my couch, having driven the rest of the family away after merely expressing my "admiration" for Teal'c's hair, and biting my nails. (Thank God I decided against getting that manicure!) The transitions between the Earth and non-Earth segments were fluid and maintained the pace, even when there wasn't all that much going on. And once the action picked up ...

Well, I haven't been this into a Stargate SG-1 episode in a long time.

And there was plenty to get into. Amanda Tapping's performance as a victim of the Replicator "We Always Hurt the Ones We Love" Fifth was brilliant and moving. Her chemistry opposite Pete Shanahan was as good as could be expected, given the situation. Her hair was ... interesting.

Speaking of strong female types, Torri Higginson's adaptation of Elizabeth Weir kindled an interest in the character that was faint after Jessica Steen's portrayal in "Lost City."

And speaking of strong, someone needs to tell Daniel to switch to decaf, or we're going to need an Asgard translator to decipher him.

Now for the rundown. What we know: Thanks to the dumb old humans, the Asgard have been rescued from their own super-intelligent ineptitude and now stand a fighting chance against Reese's LEGO bugs. They also have a ship called the "Daniel Jackson," although it can't possibly be as pretty as its namesake. Now that we're the "bully" on the block, the people of Earth have risen in the estimation of at least some Goa'uld; it's nice to know that at least we're no longer publicly being compared to livestock.

Teal'c is adjusting to Earth by adopting a new 'do. Jack is now in charge of Stargate Command, and his first act was to promote Sam ... which will no doubt elicit cries of favoritism and allegations of misconduct. Or not. Lastly, Fifth has a girlfriend. A naked girlfriend. A slimy, naked girlfriend, who looks like Sam. Could he get any creepier?

What we don't know: The Asgard might have a weapon against the Replicators ... but what about the RepliCarter? How much is really Sam, and how much is simply Evil Replicator Girl? It's only a matter of time until the happy couple is back (and hopefully clothed).

Meanwhile, how will Jack adapt to having the desk, the chair, the parking space and the phone? How fun will it be to watch him try? Can he and the others figure out how to save Earth's collective butts in case Baal does come a'knocking? When do we get to see the Asgard ships the "Teal'c" and the "Samantha Carter?" How long until we get to see our beloved General Hammond back in action?

Is Yu as senile as his crony would have you believe, or is Anubis still out there somewhere? Is a Goa'uld seeking asylum as suspicious as it seems? Will Sam's thoughts of Pete be tainted by the unpleasant memory of airborne skillets? Will sleeveless shirts become a mainstay of the S.G.C. uniform? And just how often can we expect to see General O'Neill in those dress blues?

Thanks to this excellent episode the questions abound, and an entire season -- and a whole lot of Stargate fans -- await the answers.

Following a variable season last year, Season Eight begins in a more coherent and entertaining manner. With the changes that are afoot there is vast potential for fascinating stories and interesting twists. However, it appears there is still a tendency to fall back on tired solutions and over-used plots -- which is a great shame in a series that has the ability to give so much more. Despite its faults, there is plenty in "New Order" to keep the audience tuned in.

First thing's first. As a fan of the team of SG-1, I think "New Order" delivered in a great way. The friendship between Sam and Teal'c has become a thing of beauty, both gentle and amusing. Jack, Daniel and Teal'c play off one another to perfection. Seeing the team gathered together to discuss the pros and cons of Jack's promotion was like welcoming back an old friend, and a vast improvement on the awkward team gathering at Jack's house before poor Jack was put on ice ("Lost City, Part 1").

Both the Goa'uld situation and the Replicator threat have evolved from where we last saw them, with a few twists to keep things interesting. Earth has finally become a force to be reckoned with -- not entirely unexpected considering the use of the Ancients' weapon. But the idea of taking the fight to the enemy, as was suggested by the System Lords, doesn't sit well, even if Earth manages to harness the technology of the Ancients.

If "New Order" is any indication, this is the season of change. Daniel's role seems to have permanently diverged from archaeologist to diplomat and expert on the Goa'uld. It's a role he's uniquely qualified for, and it was interesting to see Weir treat him as an equal and relying on his advice. Teal'c's new hair is unlikely to be explained, if only because it will drive Jack nuts not to know why Teal'c let it grow. And the promotions of both Jack and Sam must surely have repercussions.

While some changes look promising, others are not so auspicious. Compared to the original, the new Weir appears emotionless, and the actress's delivery is flat. I was rather relieved to know she won't be staying on at the S.G.C. The loss of Hammond, however, leaves a hole. He was a calming influence on the S.G.C. and without him the place seems to have lost much of its gravitas.

Inevitably, some of the show's unchanged facets are not entirely welcome. Poor Sam, it's a wonder she's not in therapy trying to deal with the number of men falling in love with her. And really, the plot is done. Overdone. As an attempt to bring back the kind of personal enmity that was wrapped up in the Daniel-Apophis / Teal'c-Cronus relationships, it simply doesn't have that same ring to it. Perhaps Fifth's crush is an attempt at postmodern irony, having the male of the species fight back against BlackWidowCarter. It might even be amusing on that level, if it wasn't that the underlying theme of Fifth creating the LEGO-Technic equivalent of a blow-up doll to replace the object of his affections is so disturbing.

I can only assume that we'll see more of Fifth and Carter's double (already dubbed "RepliCarter" by various fans). The Replicators themselves have never seemed a good villain to me, mainly because fighting them is rather like fighting a swarm of ants: there is very little intelligence to pit our heroes against, and the only thing provided in the way of drama is a chance for blowing up more stuff. This incarnation of human-form Replicators, while more interesting, still carries with it the impression of power with not enough smarts -- and that's down to the recipe of two parts intelligent being, three parts hormonal teenager, one part locust, and one part sociopath, all tossed into a mixing bowl and given a thorough stir. I hold out hope, though, because the writers do manage to come up some startling twists from time to time.

The other issue that brought the season opener down a notch or two was the Deus ex Asgard who appears in the nick of time to save Sam and Teal'c. Then saves Jack. Then saves the Asgard by destroying most of the Replicators. It's too easy a plot device to fall back on, and there needs to be some serious thinking before it's whipped out over and over -- the suspense is non-existent, almost to the point where you can wander off and make a cup of tea rather than wait for the inevitable to play out. I didn't this time, but if it happens again ...

With a double episode to write about there should be much to comment on. The fact that there isn't is actually a good thing. The effects, acting, sets, costumes, and all the other components that make up an episode of Stargate were as reliable as ever. These are things we've come to depend on, so much so that they frequently drop into the background, only noticed when they hit one or other end of the scale to be exceptional or poor.

Overall, "New Order" has a mixture of good drama, friendship, and children's fairytale ending. While the writing was a little lazy at times -- the use of neutronium as an element is something that owes its existence to Star Trek rather than astrophysics research -- the story was well-paced and interesting. Promises have been made that big things will happen this season, and I'm looking forward to seeing them.