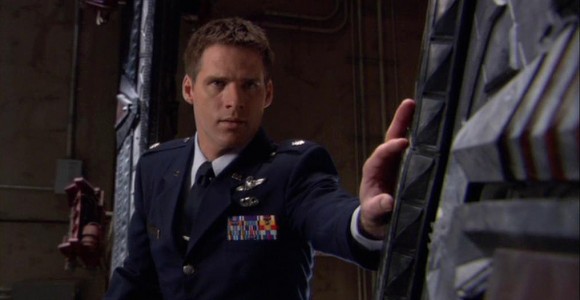 There's been a buzz around the Stargate SG-1 watercooler in recent months, much of it regarding the cast changes we've heard so much about. Would the new Colonel Mitchell end up as Colonel O'Neill lite? Would the new General take the role and run with it or would we end up missing Hammond all the more? Would the pre-season advertising emphasis on Browder correspond to a story emphasis on Mitchell? What about the characters we know and love: Daniel, Teal'c, Carter? And where would the stories take the team?

There were lots of questions and concerns, some of which began to be answered with this first offering in SG-1's new season.

With a slow start to the episode, and an excessive emphasis on quite how much of a hero Mitchell is and how much SG-1 owes him, for a short while there it did seem that concerns would be justified. Ben Browder's take on Mitchell luckily gives the character a different perspective. Watch the flashback scenes alone and you see a pilot who almost sacrificed himself to save SG-1, was showered with effusive praise by all and sundry, and was given a medal so rarely presented that none of SG-1 have received it despite saving the planet several times.

Ignore those flashback scenes, however, and we are introduced to a character who is earnest, capable, sincere, flawed, and not a little in awe of the famous SG-1. I much prefer the second guy; one can only hope we're done with the gushing.

There is no such sentimental introduction to General Landry. We plunge right in there to find a commander who is authoritative with his subordinates even while privately empathizing with their problems. The moment where Mitchell comes to life as a character, as a person, is in his meeting with Landry when he discovers the SG-1 he's come to join no longer exists. That is when we see cracks in the "hero" veneer, see under the man's skin. The interaction between the two actors is what makes the scene work.

Thus begins Mitchell's efforts to reform SG-1, to bring his personal heroes back together as a team. It is wonderful to see Daniel brimming with his enthusiasm of old, so excited to finally be going to Atlantis where he could learn more about the people he spent a year with as an ascended. Michael Shanks has managed Daniel's evolution beautifully -- it's the same enthusiasm Daniel showed in his early years, now tempered with experience and maturity. Teal'c's move to the Jaffa Council on Dakara is another natural move, one that is unlikely to keep him for long if his comments about the issues his presence creates are accurate.

There are two things that give "Avalon, Part 1" its zing: the acting and the script. I say script, rather than story, as the story itself is generally predictable and a little disappointing in its shift away from Egyptian mythology and towards Arthurian. The acting, both from our favourites and from the new folks, is generally high quality; the words given to the characters to say are spot on.

In choosing the character to fill in for Carter until Amanda Tapping's return, the least predictable option was followed and it couldn't have been a better choice. Vala and Daniel's interaction is brilliant, with the sniping at an all-time high. But a close second is the intriguing relationship between Teal'c and Mitchell. The episode has excellent characterization all around.

Memorable scenes are strewn throughout the episode. I feel a need to be able to point to one scene and say, "That's my favourite bit," but I can't choose between Vala telling Daniel she's pregnant, Mitchell getting so excited when Daniel figures out what the tablet means, and Teal'c's smirk after his shooting of a solid stone door makes Mitchell go nuts. Or it could be the pillow throwing ... you see the problem?

There does seem to be an air of new energy in "Avalon," and it's not just coming from the cast and the writers. The camera work feels more active than usual, giving new angles and adding interest to static scenes. From the opening theme right through to the final credits, the score adds an almost cinematic quality to the proceedings. And the scale of the sets and special effects -- from Dakara to the hanger to the caves under Glastonbury Tor -- made it seem that someone gave the design teams an injection of cash and they had enormous fun with the funds.

Two small things do bother me, and I'm sure I'm not alone in the first one: the shortened opening credits. What were they thinking? And second, can someone please buy Lieutenant Colonel Carter a hairbrush? Her hair is utterly undignified for someone in her position.

Overall, "Avalon, Part 1" is a very positive beginning, and I hope this quality continues. The story itself is actually the weakest part -- Arthurian legend has been done, done, done -- but even that was certainly not the worst that SG-1 has seen. I'll be watching with interest to see where it goes.