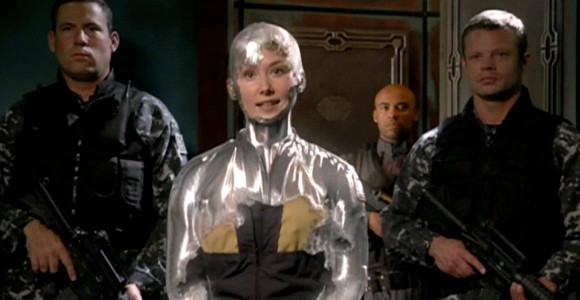 A mysterious drone crashes into Atlantis, indicating that the Replicators may have found the city. But when Elizabeth Weir appears, the team realizes that the probe is just a part of a bigger mystery.

The Atlantis Stargate has been mysteriously inoperable for more than a week. As Rodney McKay and his team work to try and figure out what is wrong with it, a new emergency strikes: a probe crashes into the city. The gate must wait, as McKay and a science team analyze the probe to try and determine its origins. But when the diagnostic program crashes, McKay offers a startling announcement: he saw a glimpse of nanite programming code just before it went offline. The Replicators may have found Atlantis.

Ronon and Sheppard engage in a sparring match, in which the Colonel is injured. But when they report to Dr. Keller, they find that his bleeding injury is completely gone. Sheppard wonders if he may have been infected with nanites from the probe, or if perhaps the Wraith retrovirus once in his system ("Conversion") has reared its ugly head again. Though Keller gives him a clean bill of health, he and Ronon suspect there is something else going on.

They find Rodney, and Sheppard cuts his hand with a knife. When it rapidly heals, they know that something much bigger is going on – and it's not just about Sheppard. The entire team is affected. Furthermore, they believe that several key personnel on the base, including Keller and Major Lorne, have been acting suspicious and secretive lately.

When they begin to investigate, they quickly make one hell of a discovery: Elizabeth Weir, their former leader taken captive by the Replicators months ago ("Lifeline"), has just appeared in the outer edge of the city. Dr. Keller arrives with the explanation: Weir has been recreated there, just like the rest of them. She and many others are themselves Replicators – now able to take the form of real people they know, since Rodney opened the door by altering their base code. Sheppard and his team, as well as Dr. Weir, are entirely organic copies built by Replicator nanites and given memories and personalities recorded when the Replicators probed their minds last year ("Progeny").

What is the Replicator's goal in creating copies of the Atlantis team? Where did the probe come from? And how will the real John Sheppard and his people react when their doubles come to them with a warning and a desire to work together?