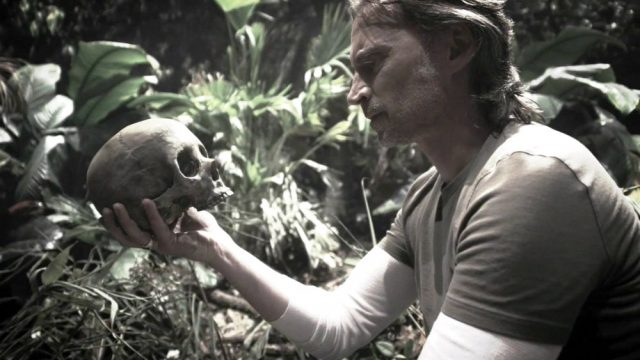 Stargate Universe got off to a strong start in its creative storytelling, as the reluctant crew of the Destiny must find the basic necessities — air, water, power — in order to survive another day. But when Season One reached the Robert C. Cooper joint “Time” on November 13, 2009, it was definitely a new high-water mark.

This week Sara’s trip through SGU arrives at this time-bent episode, along with the controversial hour that followed the next week: the relationship drama “Life.” So what does a long-time fan who is brand new to SGU think of these two, very different episodes? Take it away, Sara!

Oh damn, y’all … SGU is bringing in time travel! The kino footage at the beginning was disorienting to watch.  That fish-eye warped view made me a bit nauseous — especially when it all became first-person P.O.V. with Eli’s helmet cam. The plot of this episode, however, totally made up for a little motion sickness. I love a good mystery and well-done, non-linear story. 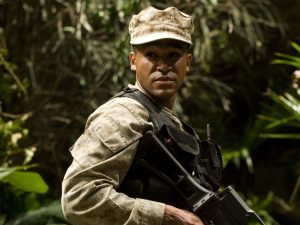 The fact that we, as the audience, get to watch the kino footage with the characters who are themselves in the kino footage — even though they haven’t been to this planet yet! — was awesome. We were just as confused as they were … and just as worried.

I’m not usually a fan of creepy movies or shows, but something about the storytelling in this episode really pulled me in.  Keeping the threat as a creature in the darkness, one we didn’t really get to see, was a great way to build suspense without ruining the scare with some poorly-rendered CGI alien.

I am glad too that Greer and T.J. are getting some character development and I am really curious about where Greer is going to go.  He seems like a good leader while on the planet. And he shows real emotion on the Destiny while everyone else is watching the kino footage.

Greer showed real empathy and gravitas. He’s more than just the guy with anger issues.  I want to know more.

T.J.’s back story is simple, but the fact that she seems to have a stable home life and positive relationship with her family sets her apart from the usual SG away-team personnel. The TV trope (I can’t speak for reality) seems to be that only “broken” people volunteer for these assignments that might be one-way.  Many of our major characters in SG-1 and SGA didn’t necessarily have anything tying them back to Earth.  Until T.J. told the story about her father, and how much she misses her sister and her family, it seemed like the crew of the Destiny was the same (apart from Eli, who didn’t volunteer).

I guess now we know why T.J. was trying to get reassigned from Icarus. 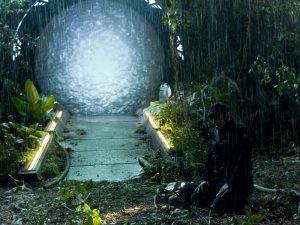 Can we talk solar flare-interrupted gate travel?  One of the great things about the Stargate franchise is that they treat their audiences as intelligent people and don’t always spoon-feed us the information.  The whole solar flare explanation was almost glossed over in this episode — because the writers trusted the viewers to remember the theory of how the disruption worked.  No ten minutes of exposition to catch us up. Just a quick “Oh, yeah, this is a thing that can happen. I bet that’s it,” and back to the story.

In this episode, the danger is almost secondary to the character interactions and drama.  In “Water,” the emotion between Colonel Young and Lt. Scott when the Lieutenant is in danger just didn’t resonate with me.  But in “Time” Greer, Eli, and T.J. all have amazing moments of raw, quiet emotion that really pulled me in.

I was sold on Eli from the first episode, and I’ve been wanting more from supporting characters like Greer and T.J. So this was an episode that ticked all the boxes for me.

But OMG that ending! Are we still in the loop?  Is Scott going to make it back to the Destiny? It just ends there?  Tell me they address this later on!

I knew I was in for a good episode when my favorite band was playing the music over the montage, which told us everyone is alive and well after that mind trip of an episode I just watched. 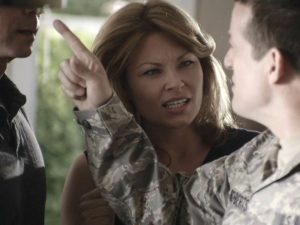 Everett confronts Telford and Emily about their evident relationship.

This whole love triangle between Young, Telford, and Emily is not my favorite thing. Especially after the communication stone body swap.  I’m fine with Young and Telford having an antagonistic relationship, but throwing Emily into the middle of it for the sake of drama just feels … unnecessary. Just make them professional rivals; or maybe they saw action together and one betrayed the other, or something not a love triangle.  Even if it’s not a full-fledged love triangle since Emily isn’t sleeping with Telford … it almost makes it even less necessary.  And it makes me as conflicted about Young as I feel about Rush.

Both Young and Rush are Gray Jedi.  They flirt with the Dark Side without fully crossing over, but they aren’t really good people either.  Sure, they’re part of the “good guys” on the show.  We want them to win.  We want them to make it back to Earth. But Young uses the communication stones for his own selfish means.  And Rush … well, he’s pretty much firmly in the gray, but we still need him to get the crew home.

When Scott got to go home I liked that he wasn’t allowed to just blab the truth to a civilian with no clearance. Of course, mere seconds later Camille gets to tell her wife. Not that I’m in favor of leaving family heartbroken and confused, but you’d think the line would be drawn a bit closer for international security purposes. Why are some people’s family cleared and others are not?

And also: Why are people’s wives so cool with making out with a stranger’s body?  And what are the moral implications?  It’s weird. 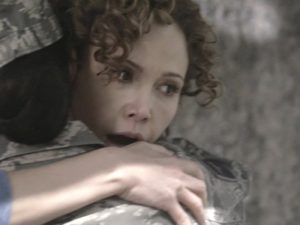 Camille returns home to her stunned partner, who welcomes her home in another person’s body.

Scott’s time at his ex-girlfriend’s house is a heavy story.  The emphasis on his Catholic upbringing makes more sense. And now that it has been established the show can subtly cover the story with his ex-girlfriend without getting preachy about it.  Once again, I tip my hat to the writers and their trust in their audience.

When the group back on Destiny discovered the Ancient chair, I was curious to find out what it would be.  Does anyone on board the ship have the Ancient gene? Can they use this chair to pilot the ship like in SGA?

In the Next Installment: Sara arrives at the mid-season episodes “Justice” and “Space.” Stay tuned!

Darren & David discuss both episodes as they happen on the GateWorld Podcast!

Great review of those episodes! I love experiencing SGU with people for the first time. I’m actually doing a rewatch with a good friend right now who has only ever seen the original movie, and he LOVES it! He often pauses to ask me questions, and I do the same. The whole solar-flare thing took little bit to explain better what they glossed over. BTW, you’re supposed to be conflicted about the characters because of them being “gray”―it’s not an accident from the writers. I’m so happy to see you’re enjoying the show thus far. BTW, technically Emily IS sleeping… Read more »

@Jolene: Great post — couldn’t have said it better. I’d also like to repeat what I had said before in the middle of a longer comment, SGU Kino #23: “We Volunteer to do This”, clears up the moral ambiguities of body-swapping, and probably more importantly, the legal ramifications. When you see it you’ll realize, “Of course they have to do this!”