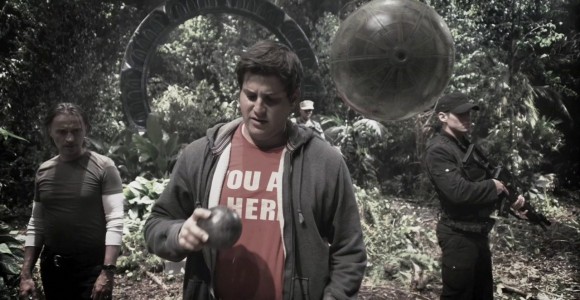 A team from Destiny arrives on a jungle planet, where they find a kino with footage of themselves they haven't shot yet.

Eli Wallace, Dr. Nicholas Rush, Lt. Matthew Scott and MSgt. Ronald Greer step through the Stargate onto a planet covered with lush jungle growth. As they explore, Eli discovers a kino lying on the ground near the gate, its databank full. Rush finds a human skull. Returning to Destiny they are joined by Chloe Armstrong, Lt. Tamara Johansen and Colonel Everett Young as they watch the salvaged kino's footage – footage of themselves ...

In the kino video, a large contingent from Destiny emerges from the Stargate. They search through the lush foliage for possible food sources. Collecting what they find, Eli plays taste-tester, taking a bite of one fruit-like plant. He hastily spits it out. Before anyone can sample anything else, Dale Volker vomits and passes out. A moment later, Chloe also faints.

Afraid they may have been infected by something on the planet, Lt. Johansen won't allow anyone to return to Destiny. Fearing it may be bacterial meningitis, she begins administering what little antibiotics they have. Thirty-six hours remain before Destiny will resume her journey, with or without them.

MSgt. Greer locates a number of 4-foot-high, termite-like mounds. He does not find what made them. As night falls, rain begins. By now, Lt. Vanessa James, Dr. Franklin, and Sgt. Marsden are also ill. Adam Brody screams as a creature with squid-like tentacles and a long tail attacks the encampment from the darkness and burrows into his chest.

Gunfire keeps the creatures at bay long enough for Eli to dial the Stargate. But the event horizon is full of static, suggesting the wormhole is unstable. Destiny doesn't answer on the radio. The creatures break through the gunfire perimeter and one attacks Lt. Scott, but Greer pulls it off before it digs in. Another burrows through Chloe, killing her.

Watching the kino footage of her own grisly death, Chloe vomits. T.J. suggests quarantining Eli, Scott, Greer and Rush in case they brought a contagion back from their own (less eventful) visit to the same planet. She also quarantines anyone who has come in contact with them. Word spreads about the gruesome footage, but no one knows how the kino recorded these images. To their knowledge, they've not been to this jungle planet before now.

In the recording, Eli tapes the kino to a helmet to continue documenting their frightful experience on the planet the next morning (one of Greer's bullets disabled its flight capabilities). With 22 hours left until Destiny resumes F.T.L. flight, they still cannot make a stable wormhole connection. Chloe, James, Marsden, Brody and Sgt. Spencer were killed by the creatures, which the team now sees are nocturnal. Volker, too, died – but of an unknown cause, not at the hands of the creatures.

Matthew Scott, meanwhile, is unconscious after being stung with the venom of one of the creatures. Greer locates a cave. Making a stretcher, Rush, Franklin, Johansen and Greer transport Scott there. Eli carries their supplies and the little ammo remaining. As T.J. rests, Eli confides that his mother is H.I.V.-positive. His father abandoned them when she was diagnosed. He was 14.

As Rush and Greer mount flashlights on poles, Franklin falls unconscious. In a discussion with Eli about death, Rush reveals a burning desire to learn the secrets of ascension, as the Ancients did.

On the ship in the present, Eli pauses the recording when his version of Chloe faints. Destiny dropped out of F.T.L. flight about three hours ago – the same amount of time after which the Volker-on-the-recording felt ill. Others who had contact with the kino retrieval team also become sick. Since the Volker on the recording died 12 hours after the first symptoms, the contagion is virulent.

Searching for answers, they resume study of the kino recording. Greer teaches Eli how to shoot an M-4. He also destroys a number of the tall nests with C4. They dial the Stargate again, but the wormhole remains unstable. Only 11 hours remain until Destiny jumps back to F.T.L. flight.

When night falls and the rain begins, the creatures attack in force. Eli keeps recording as guns blaze in the darkness. The flashlights fail, and Eli uses the kino's night vision to spot the advancing wave of creatures. Their ammo is quickly spent, and it is far from enough. Rush runs to the Stargate and dials, and Eli follows him. The wormhole is still unstable, but he dashes into the event horizon anyway – their only remaining choice. Before he goes, he tells Eli, "For a moment there, I thought we were in trouble." In the present, Colonel Young recognizes it as an allusion to the hopeless ending of the film Butch Cassidy and the Sundance Kid.

Everyone in the recording dies horribly – except for Lt. Scott, who awakens in the cave to find himself the sole survivor of the expedition. Composing himself, he returns to the Stargate. Ironically, he is no longer suffering from the contagion that killed Volker. Venom from the creature's bite apparently cured him. With only 45 minutes left until Destiny moves on, he throws the kino into the still unstable wormhole. It lands next to a dead Rush not on the Destiny, but still on the jungle planet.

Meanwhile, in the present, as non-quarantined people fall ill on the ship, Johansen realizes the disease came from the water recovered from the ice planet a few weeks earlier. Everyone on the ship has been exposed. Rush has an epiphany, and hastily dials the Stargate. The wormhole instability is caused by a solar flare, which sent the kino back in time – for them to find. If the flare hasn't occurred yet, they might retrieve a creature from the planet and use its venom to cure themselves. Based on the kino time stamp, they have about an hour before the flare. Young, Scott, Greer and Spencer hurry to the planet. It is night time and raining, making the hunt dangerous ... but they cannot wait any longer.

In the infirmary, Eli tries to tell an unconscious Chloe how he feels about her. But it is too late – T.J. tells him that she is gone. Lt. James, Chloe, Franklin and Volker have all died.

On the planet, the hunting party is attacked by the creatures. All but Scott die horribly. He thinks quickly, grabbing the kino and heading for the gate. He explains the situation into the device, noting that if they send a team during the day they can capture the nocturnal creatures in their nest. Dialing the Stargate, he fends off another creature with his sidearm and waits for the event horizon to fluctuate – signaling that the solar flare has started, to create the time loop that will allow this second kino to be retrieved by Destiny's people once again.

"Please believe me," he says. "You don't have much time. Act now, or you are all going to die."