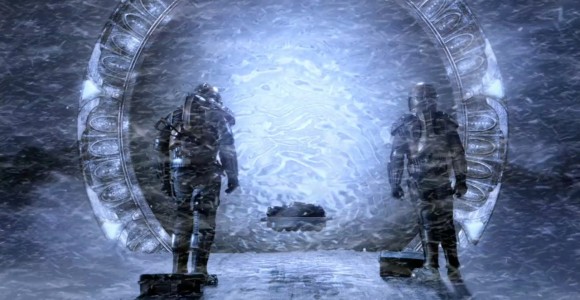 More than half of Destiny's water supply, some 40,000 liters, has disappeared. Yet the ship reports no leaks. To make matters worse, despite passing through a sun ("Light") to recharge power cells the ship's systems have only been recharged to less than 40 percent of design capacity. Dialing Earth is still impossible. The struggle for survival continues.

Suspecting theft, Colonel Everett Young assigns MSgt. Ronald Greer and Sgt. Hunter Riley to guard the dwindling water supply. Adam Brody helps Dr. Nicholas Rush search for a reason for the water's disappearance. And the Colonel assigns Eli Wallace to monitor conversations with a kino, so that he may assess threats from within Destiny's population.

Unnoticed, a swirling sand vortex like the one that helped Lt. Matthew Scott on the desert planet ("Air, Part 3") swirls out of Eli's workroom. It encounters Greer. He turns to look, but the swarm disappears as Young rounds a corner. The ship has dropped out of F.T.L. flight.

Colonel Young arrives in the gate room, where he learns that Destiny has dialed the Stargate on the one planet in range. A blinding snowstorm rages, and the air there is poisonous. Young asks Dr. Lisa Park about the Ancient environmental suits her team has been working on. Only two suits are ready; Young radios Lt. Scott for the mission to retrieve ice and replenish the ship's water.

Scott, however, has his radio turned off. Lt. Vanessa James (his former lover) finds him passionately kissing Chloe Armstrong. Hastily, he reports to the gate room where he and Young suit up. Dr. Park gives them a plasma cutter to cut the ice. They have about eight hours of air or the mission. Handing command of the ship to Lt. Tamara Johansen, Young and Scott step through the Stargate.

Arriving on the hostile planet, Young tests the ice in the immediate area of the Stargate. Like the atmosphere, it's toxic. They must move farther afield to find clean ice – limiting the amount they'll be able to haul back to the gate. Eli remembers a device he constructed to allow him to fly – a table top levitated by a couple dozen kinos. They push it through the event horizon to help transport ice.

Trudging through the snow and away from the Stargate, Young tests the ice again. It's still toxic. Strong tremors add another degree of danger to their search. Eventually a frozen waterfall proves to be pure, usable ice. Young hacks off chunks, but worries they are taking too long. Scott shoots at the waterfall, and the two men begin piling the large blocks of ice onto the sled. A forceful quake rocks the area as they return to the Stargate.

While waiting for the sled to be unloaded, Rush radios Young to tell him that a situation has developed aboard Destiny, but that it is under control. Eli blurts out that aliens have shredded Corporal Gorman, who encountered the alien sandstorm in the corridor and was attacked after he drew and fired his weapon at it. Stressing the need for the ice, Rush keeps Young from returning prematurely.

After Young and Scott's departure, Johansen learned that the water levels had dropped again, even though the tank was guarded. She ordered Greer and Gorman to search the ship. En route to the gate room, Johansen encountered the vortex herself. Cautiously, she approached the cloud of tiny, flying creatures. As with Scott on the desert planet, they coalesce in front of her into a face. When a voice came over her radio, the vortex dispersed.

Calling T.J. to Sgt. Spencer's room, Greer reports that he has found water and a backpack full of stolen energy bars. Johansen confines Spencer until Young's return. As Spencer's water is no 40,000 liters, Greer continues his search while she talks to Rush.

Johansen, Rush and Eli concluded that a few of the aliens came through the Stargate from the desert planet unnoticed because of their diminutive size. They've reproduced and consumed Destiny's water ever since. While they seemed harmless at first, Johansen restricts everyone to quarters. She does not explain why.

After the entity attacks Gorman, Greer rigs a flamethrower to fight it – but T.J. discourages him from going on the offensive. But herded by Greer's flamethrower, the creatures are contained in a small compartment. They begin to escape even through the air-tight door, and so Johansen must devise a plan to get the creatures off Destiny.

Young and Scott collect more ice on the planet. They load up the sled and prepare to return, but another quake cracks the thin ice beneath Scott's feet. He drops into a crevasse. Tossing Scott a rope, Young struggles to free him – but Scott is tightly wedged in between two massive walls of ice. Another tremor squeezes Scott even more, compromising the integrity of his suit. The gun and the plasma torch they brought are too dangerous to use in such close quarters, and Young is physically incapable of pulling free the junior officer.

Rush estimates that Scott has an hour of air left, and urges both men on the planet to consider the greater good. The ice must be brought back. Young refuses to abandon Scott – even when Matt himself suggests it.

Yet another quake leaves a barely conscious Scott dangling freely in the crevasse, and Young pulls on the rope with all that he has. He rouses Scott back into consciousness, and the two work together to hoist him out of the hole. Loading a weakened Scott onto the sled, Young starts toward the Stargate. But Destiny dials the planet before Young can, and he must wait. Rush warns him to move away from the Stargate and remain very still. Destiny is sending the aliens through.

Johansen has trapped them in a small drum containing water, which is flung into the event horizon. On the planet, the swarm bursts out of the container. The vortex recognizes Scott and coalesces into a face over his head, before moving away. Young hastily dials the Stargate.

After Scott is tended to, Young issues a stern warning to Sgt. Spencer and releases him. In the corridor Drs. Park, Franklin and Volker try and stop the Colonel with their requests and demands. But Young just keeps walking.

Alone with a kino, Young makes his first official recording. He must note the death of Corporal Gorman – the makeshift mission's first casualty.