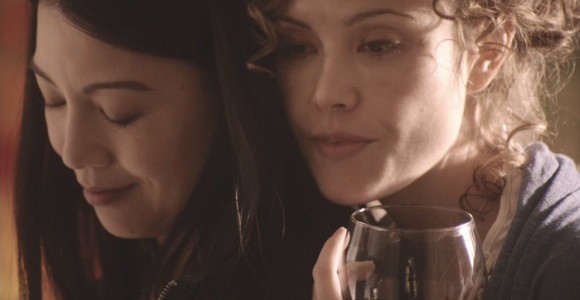 Lt. Scott and Camille visit their loved ones using the communication stones, leading Colonel Young to a discovery about Telford's activities. On the Destiny, Rush discovers technology he believes may be able to get them home.

The people stranded on Destiny do what humans do – cope with their situation as best they can. Dr. Franklin checks for sprouts from the seeds planted in the hydroponics lab. Lisa Park and a soldier named Rivers have sex. Chloe Armstrong performs a yoga routine. Camille Wray sketches a beach scene. Sgt. Spencer takes the last pill from a prescription bottle. Matthew Scott leads an exercise routine. Everett Young watches Dr. Nicholas Rush via kino. On Earth, Colonel Telford, wholly himself, calls on Emily Young for dinner. Others pour themselves into work.

Worried about Spencer, Lt. Tamara Johansen approaches Colonel Young. He orders psych evaluations on everyone. Eli Wallace is running simulations of Telford's plan to dial the Stargate to Earth ("Earth"), but all of them end in catastrophe. Rush is observing as a team led by MSgt. Ronald Greer investigates new sections of the ship.

They enter a lab and find an early version of an Ancient interface device used several times by Jack O'Neill ("The Fifth Race," "Lost City, Part 1") – a menacing-looking chair that, in theory, will download information directly into the user's brain. Hoping to find the master code controlling Destiny's major systems, Rush tries to persuade Young to order someone sit in the chair. As later versions of the repository of knowledge nearly killed O'Neill, Young refuses.

Young is summoned to the communications room, where Lt. Scott and Camille Wray have engaged the stones for personal visits. Now occupying Scott's body is Colonel Telford. He demands to know why Young hasn't turned over the data on the failed plan to power the Stargate – and he wants to know how Rush defused the emergency so quickly. Young refuses to relinquish the data until Eli has finished his own analysis.

On Earth, Camille in her temporary body is driven to the house she shares with her partner of 12 years, Sharon. The pair share an intimate few hours at home. But all too soon, they exchange tearful goodbyes, with Sharon encouraging Camille to do whatever it takes to motivate the people on board the Destiny and get herself home.

Wray also visits her parents, who are not cleared to know the reality she is trapped in. In addition, Wray is accosted by I.O.A.'s Carl Strom, who suggests she stake her own claim to command Destiny, rather than throwing her lot in with Young or Rush.

Meanwhile, Matthew Scott (in Telford's body) is handed mail by his escort, Dr. Mehta. One of the letters is from the a woman from his past – the girl he got pregnant when she was 16. After eight years, Annie Balic wants to see him. When Scott and Mehta arrive at the Balic home, they discover a young boy home alone. They wait until Annie returns, three hours later. Scott quickly realizes that young Matthew is his son, that Annie did not have an abortion ("Air, Part 3"). Saddened to learn she is an exotic dancer instead of the lawyer she hoped to be, Scott arranges for his paycheck to be diverted to Annie. Despite this, Annie refuses to give up dancing.

While Scott and Wray are on Earth, Drs. Adam Brody, Lisa Park and Dale Volker work with Rush in the newly discovered chair lab. They believe Young will eventually give them permission to try out the chair. Suddenly, Rush laughs with glee. He has found a subspace link between Destiny and the Ancient ships sent ahead to seed Stargates. Searching the database from the link, he has learned of a planet with ample naquadria to dial Earth. It is approximately one year away.

But to have any hope of taking advantage of the opportunity to power the Stargate, they will need to access Destiny's key systems. Rush tries again to get Young to authorize use of the chair. The Colonel challenges Rush to sit in the chair himself – knowing that it likely means death for whoever does. Rush shies away from the challenge.

The news of the planet brings hope to everyone, except Spencer. He doesn't think he can last a year. Later, when Franklin inadvertently bumps into Spencer, the man explodes. Only Young's intervention saves Franklin from the raging Marine.

Asleep in his quarters, Scott awakens from a dream about Emily Young. Suspecting that he's seen residual images from Telford's mind (due to the use of the stones), he tells Young that Telford may be visiting his wife. Using the stones to swap bodies, Young goes to Emily's home and finds Telford inside. Confronting them, he accuses Telford of posing as him to seduce Emily. Emily protests, even as she accuses Young of continuing his past affair with Lt. Johansen. As Everett rushes his enemy, Telford quickly calls Homeworld Command and orders the Colonel's link terminated.

Seething, Young is accosted by Scott and Eli back on the ship. Eli has evidence that Rush concocted the entire story about the planet that might help them to dial Earth. Wray overhears. An angry Young confronts Rush. Rush laments the loss of hope and productivity even as he pushes for authorization to use the chair – on someone else.

T.J. finds Young in the mess hall. She has conducted 14 crew evaluations, and has more scheduled. But most are avoiding her. Young himself declines to talk about his personal life with her, and instead returns to Earth via the stones. He finds Colonel Telford, jumping him from behind and beating him to the ground.

As Destiny and life continue on, people cope. Chloe teaches Eli her yoga routine. Wray returns to her drawing to add the boat she realizes she left out – a duplication of a painting that hangs in her home. Spencer stares vacantly at the ceiling in his quarters. Park finds comfort now in Greer's bed. Despite his anger, Brody assists Rush in the control room. Young spies on Rush with the Kino. And Scott, alone in the shuttle, cries.

But in the hydroponics lab, real hope is born. One of the seeds has sprouted.