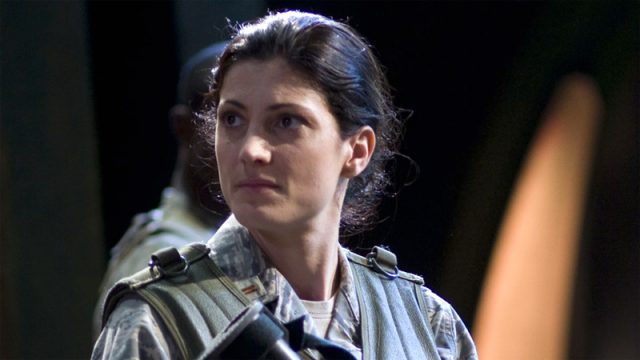 On this Veterans Day we salute all the real-life heroes who have served in the armed forces at home and around the world!

A member of the Destiny crew, 2nd Lieutenant Vanessa James plays a key role within Colonel Everett Young’s fragile command structure on board the Ancient ship millions of light years from home. James often commands a unit of soldiers, suggesting she is the third in command (below Colonel Young and Lt. Matthew Scott) among the ship’s military contingent.

Like many of the reluctant members of Destiny‘s crew Vanessa experienced something of a personal crisis during her first months aboard. Her romantic relationship with Lt. Scott was abruptly cut off, leaving her on the outside looking in as he kindled a new relationship with Chloe Armstrong in the close confines of the ship. This left her understandably hurt and angry — so much so that, when infected with a parasite that brought out the crew’s darkest fears, she hallucinated killing Lieutenant Scott. 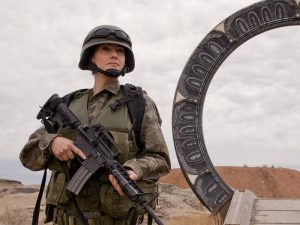 But Lt. James would continue to serve the crew as a rock of steady service to others, using her skills for planetary missions and to provide security for the beleaguered civilians on the ship.

Before she was cast as Lt. James on SGU actress Julia Benson (née Anderson) appeared on Stargate Atlantis. She played Willa, one of Lucius Lavin’s wives, in the third season episode “Irresistible.”

Though she was not a full-time series regular, Julia is credited in a whopping 36 of SGU‘s 40 episodes.

What is your favorite Lt. James moment? Post it below!

Hah. You dug deep to find photos of her character other than the typical ones used. Just search “Vanessa James stargate” and you’ll see what I mean.