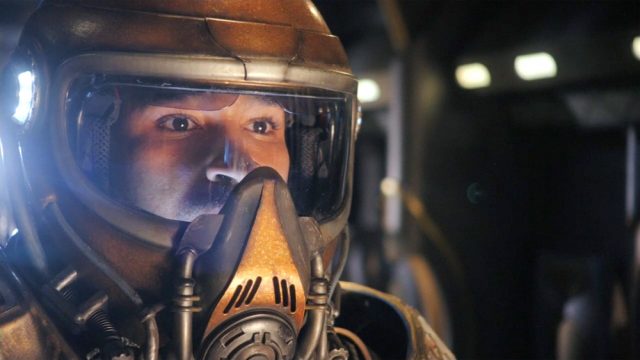 Destiny enters a dangerous region of space as Stargate Universe reaches the mid-season finale of Season Two. The crew is about to come face-to-face with a fleet of automated drone ships, controlled by unmanned command ships left behind by a long-dead civilization. And Sara is about to encounter the drones in her first time watching SGU!

But first: A group of crew members miraculously return from the Eden planet, left behind back in Season One’s “Faith.” But are they really who they say they are? 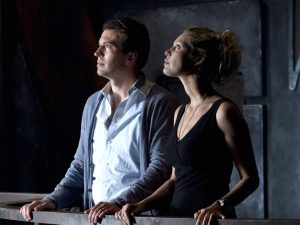 Shuttle! Off the port bow! The former crew members who settled on the Eden planet suddenly find themselves in a shuttle riding alongside the Destiny. T.J. is crushed that her baby isn’t with them, and everyone else thinks she’s crazy.

And, oh, yeah, Chloe is still slowly turning into a Smurf.

Caine, with no memory of leaving Eden, thinks God saved them all. Most of the lead crew are leery that the powerful aliens who built Eden are behind it all. Is it all a threat, or simply an act of goodwill? Everyone is uneasy but trying to make the best of it.

This entire episode is a spaceship full of people who don’t know how to deal with what is going on around them. It’s refreshing to see a team take their time in deciphering what the heck is going on, instead of shrugging and pushing the button to see what happens. The format of SGU gives the writers room to slow the story down and really explore the emotional and psychological ramifications of their extraordinary circumstances. 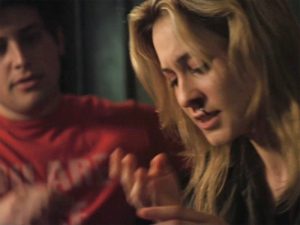 This kind of episode on Stargate SG-1 or Atlantis would have nose-bled Val and Peter to death before the first commercial break. Caine would divulge that everyone died on Eden before the halfway point. And Chloe would be full Smurf within a single episode, or maybe a mid-season two-parter.

And, I’m not going to lie — I fully expected to see Oma Desala in that glowy kino footage!

When the crew traces an energy pattern to an intergalactic battlefield, they decide the best course of action is to explore the debris. Which, as we all know, is the most logical course of action. Lt. Scott, MSgt. Greer, and for some reason, Brody head out into the (surely haunted) battlefield and promptly trigger some sort of reaction from a piece of alien tech, which no one notices for a while.

This episode is much more traditionally paced: find a weird thing, poke it, realize poking it was bad, scramble to fix our mistake, and near die in the process. A fleet of drones attacks the Destiny until Colonel Telford shows up on a seed ship and saves the day. It turns out that the Ninja Turtle aliens helped Telford find and return to the Destiny. 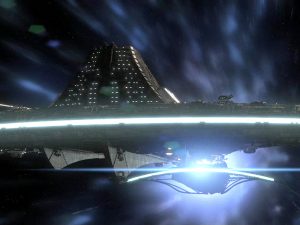 Chloe does not trust the Ninja Turtles, despite the promises that they’re going to help the crew dial Earth and get home.

Meanwhile Eli is having a hard time moving forward after his one-night stand was killed. I can’t help but feel Eli’s morose mood would feel more genuine and emotional if he’d had more than one real interaction with Ginn. If it was framed as the straw that broke the camel’s back, I think I’d feel for him more.

But let’s take a moment to appreciate Chloe going into full bad-ass Buffy Summers mode! Or maybe she’s more of a River Tam now. But either way, I like no-fracks-given action Chloe. I certainly hope she sticks around for a while.

In the Next Installment: The mid-season cliffhanger is resolved when the Nakai show up in “Deliverance.” Then, the crew finds another Destiny from an alternate timeline in “Twin Destinies.”