Browse: Home / 2022 / November / The 5 Stargate Movie Actors Who Returned To The Franchise 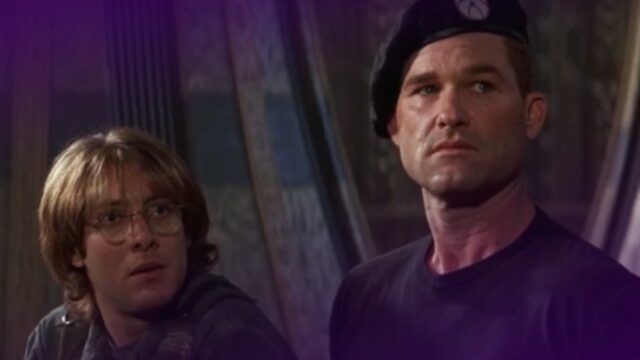 Stargate was a hit when it first arrived in theaters in October of 1994. The film from writer-director Roland Emmerich and writer-producer Dean Devlin wasn’t a summer blockbuster, but it did set a box office record for an October release.

Here was a brand new and imaginative science fiction universe, populated by square-jawed heroes and colorful villains. Stargate mashed up space sci-fi, ancient mythology, and militarism in a story with action, adventure, and humor.

MGM had purchased the rights to Stargate in time to release the film, but in the end they weren’t interested in turning Emmerich and Devlin’s new idea into a trilogy of feature films. Instead they chose to take Stargate to television. Devlin and Emmerich were out, and Stargate SG-1 co-creators Jonathan Glassner and Brad Wright were in.

As the story pivoted to a weekly television format, changes were inevitable. Many characters from the movie would return, though not always played by the same actor. (Leading men Kurt Russell and James Spader, of course, were movie stars who were not looking for a TV-sized paycheck in the 1990s.) Some members of the Stargate cast would come back to reprise their roles. But — and here’s where things get interesting — other cast members would come back later in the franchise to play a different role altogether.

Before you scroll down to the full list: How many can you name? We’re looking for actors from Stargate (1994) who appeared later in the Stargate franchise, either as the same character or as someone completely different. 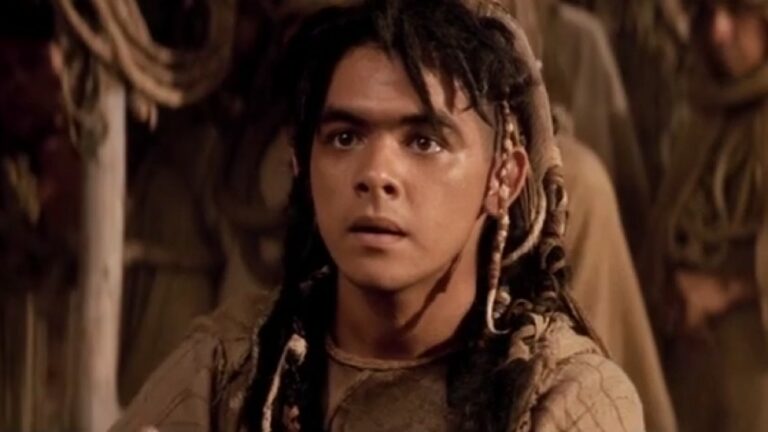 Actor Alexis Cruz stepped into his Stargate role at the age of 18. He was cast as the Abydonian boy Skaara, son of their leader Kasuf — which technically made Skaara a sort of prince. Skaara would become fast friends with Jack O’Neil and Daniel Jackson, and help the team from Earth to overthrow the evil Ra.

Cruz revealed that when MGM was first talking about a Stargate TV series he was approached about reprising his role full-time, as a main cast member. But the young actor turned down the offer, and Wright and Glassner fashioned the 4-person team that viewers came to know and love. (And now it’s hard to imagine a version of SG-1 with Skaara on the team!)

It wasn’t the end of the road for Cruz or for Skaara, of course. He did sign on as a recurring guest star, making him the first Stargate cast member to appear in the new show. Jack finds Skaara on Abydos in the series premiere, only to lose him to Apophis and the Goa’uld. In “Children of the Gods” he is taken as a host, and when Skaara returns in the Season One finale we learn that he has been possessed by Klorel — the son of Apophis himself!

Cruz would make a total of five appearances on Stargate SG-1, in the dual role that must have been a lot of fun to play. (In fact, here’s an interview he did about it with GateWorld back in 2008.) 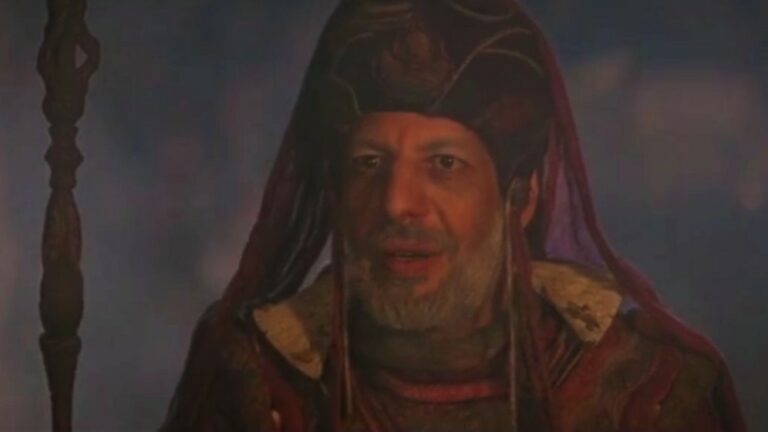 Skaara wasn’t the only Abydonian to return for Stargate SG-1. The great Erick Avari also agreed to reprise his role, as the leader Kasuf. He was an incredibly memorable part of the movie (the 5th Avenue candy bar scene alone is worth the price of admission — “Boniway!”). So it was a treat to see the original actor return to play this character on the show.

Avari’s return to Stargate didn’t come until the second season, though. Daniel returns to Abydos in the episode “Secrets,” reporting to Kasuf with deep regret that he hasn’t yet managed to rescue his daughter Sha’re from the Goa’uld. But Kasuf (who now speaks really excellent English, thanks to Daniel’s fine tutoring) shows him that Sha’re has returned home on her own … and she is pregnant with the child of Apophis!

Kasuf would only make two more appearances on the television series. He’s back to wrap up Sha’re’s storyline in Season Three’s “Forever in a Day,” and for the introduction of her child Shifu in Season Four’s “Absolute Power.” He does get a mention in Abydos’ final story, though, and Kasuf probably had the same fate as the rest of his people in the sixth-season finale, “Full Circle.” 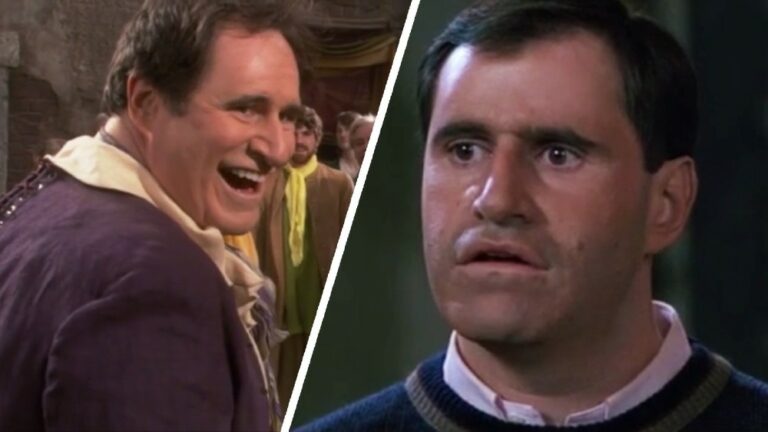 In the pantheon of Stargate characters, most viewers probably recognize the great comedic character actor Richard Kind as Lucius Lavin. In the Pegasus Galaxy Lucius is a con-man, who provided some comic relief (and the occasional moral conundrum) for Stargate Atlantis.

Both of Kind’s guest appearances came in the spin-off’s third season. In “Irresistible” Sheppard’s team brings the very friendly and jovial Lucius back to Atlantis with them, and only later discover that he is using a pheromone concocted from an alien herb. It made everyone he met become completely enthralled by his charms … except for John Sheppard, who was lucky enough to have a head cold so he couldn’t smell anything.

Then, in “Irresponsible,” the team found Lucius running another scheme on a different planet. Lucius was using an Ancient personal shield emitter to ingratiate himself as the hero and protector of a village, even hiring some Genii thugs to make it look good.

And his role in the Stargate movie? You can spot Richard Kind helping to unlock the Stargate at the Air Force base, as Dr. Gary Meyers. It’s his chalkboard translation of the Stargate cover stones that Daniel corrects: it’s not “Doorway to Heaven” … it’s “Stargate!” 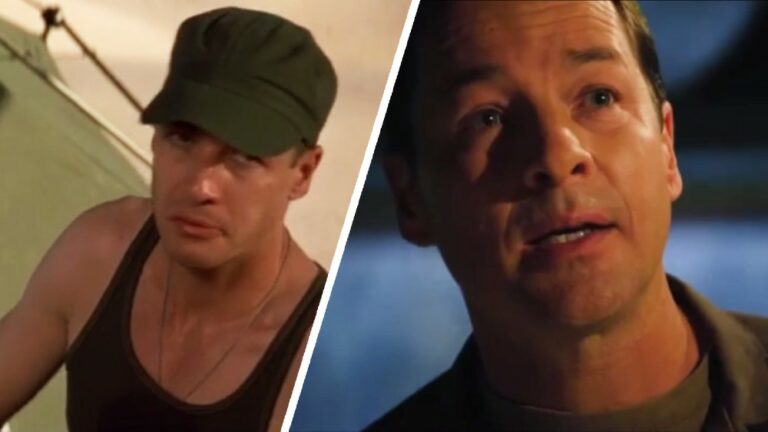 Fans of the great sci-fi comedy Third Rock From the Sun know actor French Stewart as Harry Solomon, the goofiest member of the alien family. But before that he played a very different role in the 1994 Stargate feature film: Lt. Ferretti, a soldier and member of the first team to go through the Stargate.

In the movie Ferretti is the soldier who throws Daniel’s suitcase at him under the hot desert son, angry that Dr. Jackson doesn’t know how to dial them home. He’s then captured when Ra’s ship lands atop the pyramid, and after a bold rescue joins the Abydonians in liberating their world from oppression.

Along with Lt. Kawalsky, Ferretti did make it into the first season of the TV series. Both characters were recast, with Canadian actor Brent Stait picking up Stewart’s role.

But French Stewart wasn’t done with Stargate yet. In the second season of spin-off Stargate Universe he was cast as Dr. Andrew Covel, who uses the communication stones to visit Destiny (“Alliances”). Covel is a genius and a peer of Nicholas Rush … but when he discovers that his body back home has been exposed to a lethal dose of radiation, Dr. Covel tries to hold on to the new body he has on Destiny.

It’s a very different character than the one that started his Stargate journey, giving Stewart a chance to flex his dramatic acting muscles with a more nuanced role. 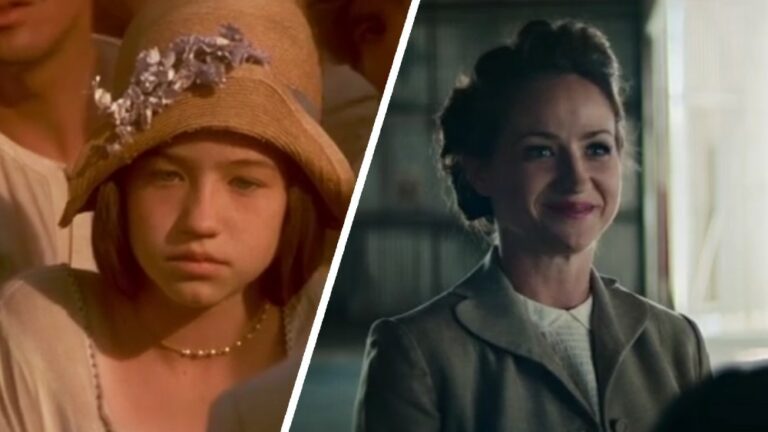 Here’s the one you probably missed, and it’s a tricky one! As a child actor Kelly Vint played the young version of Catherine Langford in the opening scene of the movie, when her father brings her to the Stargate’s dig site on the Giza Plateau. She doesn’t have any lines, but memorably it’s here that Catherine finds the amulet with the symbol of Ra — which a much older Catherine will pass on to Daniel Jackson.

Kelly Vint was 11 years old when Stargate was filming, and she had a few more sporadic film and TV roles throughout her childhood. She came back to acting as an adult, but at this point the Stargate TV series had ended.

In 2017 Kelly Vint Castro was cast in a very special cameo role in the short-form Web series Stargate Origins (which you can find today streaming as a feature-length cut, Stargate Origins: Catherine). She turns up at the end of the story as an unnamed American agent, who meets a 20-something Catherine Langford (played by Ellie Gall) and her father (Connor Trinneer).

And in a nice touch, her character admires Catherine’s eye of Ra necklace. Full circle, indeed.

How many of these five actors did you know? Think we left anyone out? Post it in the comments below!

I didn’t know the little girl at the beginning of the Stargate movie, was in Stargate Origins!

I am new to this and don’t know what to do.