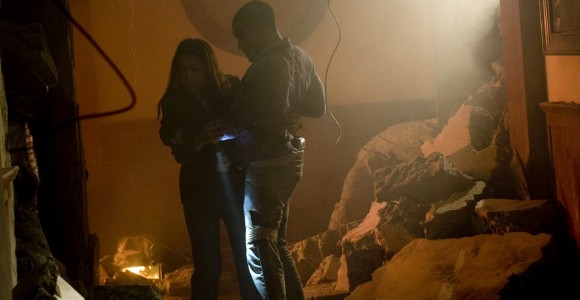 While a U.S. Senator visits Destiny, Camille and Sgt. Greer are trapped when Homeworld Command comes under alien attack.

Colonel David Telford visits Destiny via the communication stones. He warns that U.S. Senator Michaels, the head of the off-world spending committee, is coming to Destiny to assess the entire ninth chevron project and its future – namely, the team's continuing involvement in Destiny's mission.

Since Michaels is a woman, Camille Wray volunteers to temporarily trade bodies with her. With a chance to visit Earth, Wray intends to confer with her superiors at the I.O.A. Dr. Andrew Covel, who worked with Rush before both were recruited into the Stargate program, will accompany Michaels to Destiny. As MSgt. Ronald Greer is the only Destiny crew member who hasn’t yet visited Earth, Colonel Everett Young orders Greer to swap with Dr. Covel. 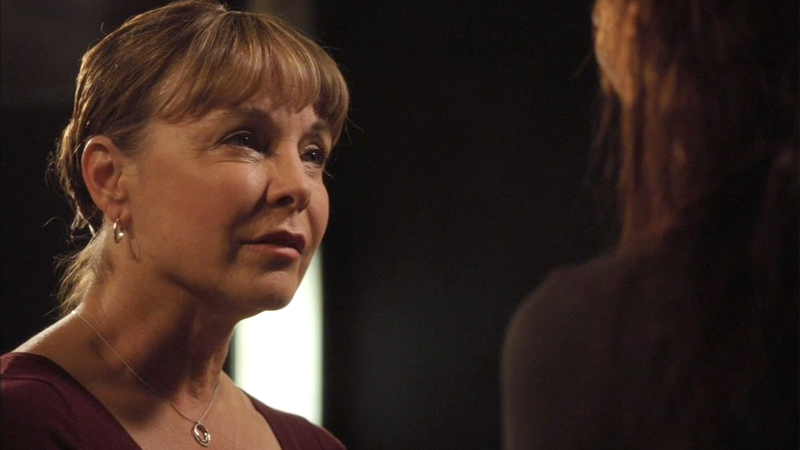 Greer and Wray arrive at Homeworld Command, which is currently on heightened alert following a credible terrorist threat from the Lucian Alliance ("Malice").

Meanwhile, Michaels and Covel arrive and begin their tour of Destiny. But Michaels confronts Colonel Young, berating him for not adhering to his mission – to return the crew safely to Earth. Eavesdropping, Nicholas Rush joins the group after both guests blame the alternate Rush for whatever happened when the Stargate was dialed inside the star ("Twin Destinies"). The Senator also asks to see Chloe Armstrong – daughter of the late Senator Alan Armstrong ("Air, Part 2"), and a family friend.

Rush takes Michaels and Covel to the ship's bridge, where Chloe is scanning the F.T.L. jump logs. A delighted Chloe volunteers to show Senator Michaels around the ship. When they are alone, Michaels confesses she doesn’t know how Chloe has coped with being stranded for a year on Destiny. It’s not the life that her father planned for her. But Chloe feels she is doing something important here.

Covel examines the bridge as well as Rush's discovery of a signal in the universe's cosmic background radiation – evidence of an early intelligence the Ancients detected ("The Greater Good"). Covel can hear the structure, but he doesn’t believe it. He just can’t recommend that Homeworld Command commit more resources to Destiny’s mission.

On Earth, Wray and Greer are arguing when an alarm echoes through the halls of the Homeworld Command facility. Greer drags Wray to cover in an office as an explosion rocks the building. Wray emerges from beneath a desk, with rubble everywhere. She finds and rouses Greer. His knee is twisted. When more of the building collapses, Wray splints Greer’s knee and they start toward the nearest exit. 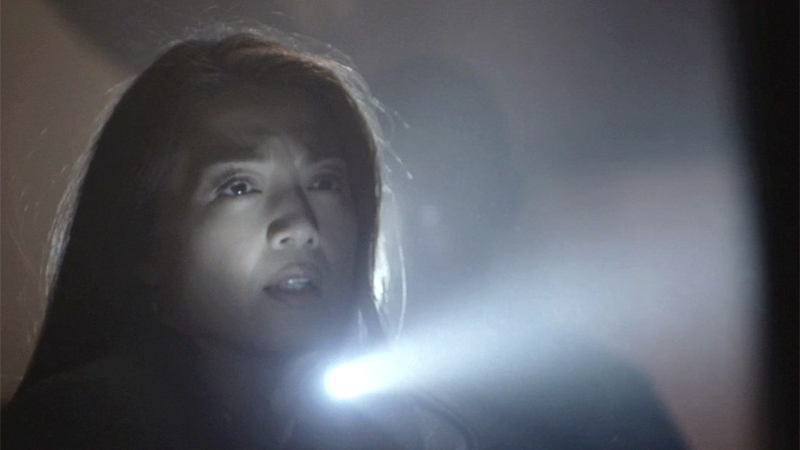 They find and free Airman Evans in the ruins of a corridor. Wray retrieves a radio and gun from a fallen soldier and when she calls for help, Colonel Telford answers. He is outside, helping to organize the rescue effort following what has been a major attack. A cloaked cargo ship crashed into the building, and they have reason to believe there is still an unexploded bomb on board, somewhere in the rubble.

Back on Destiny, Michaels meets Lt. Tamara Johansen and Varro of the Lucian Alliance in the ship's infirmary. Elsewhere Covel talks to Eli Wallace, who is in the control interface room with Adam Brody and Dr. Dale Volker.

Meanwhile, Wray, Greer, and Evans discover that they won't be able to get to an exit from the collapsed building. The debris is also preventing the bomb squad from entering the building. As the 50- to 70-megaton bomb is naquadria-based, the entire area is being evacuated. Since they aren’t far from where the cargo ship crashed, Wray tells Telford they will try to defuse the bomb themselves. It may be the only way to reach the weapon in time and save not only the locals, but the entire planet.

As the three make their way toward the impact area, Wray pauses. She and Greer argue again and, frantic, Evans yells at them to stop. He finds a Geiger counter, discovering that they have been exposed to lethal amounts of radiation.

Colonel Young confers with Michaels and Covel on the ship. Neither has faith in Destiny or her crew to survive the more than six months that it will take before Earth can establish a new base on an Icarus-type planet and be ready to dial Destiny, in order to provide supplies and reinforcements to support the mission. Brody interrupts to advise them that Destiny will soon drop from F.T.L. flight, resulting in a momentary interruption of the link between communication stones. 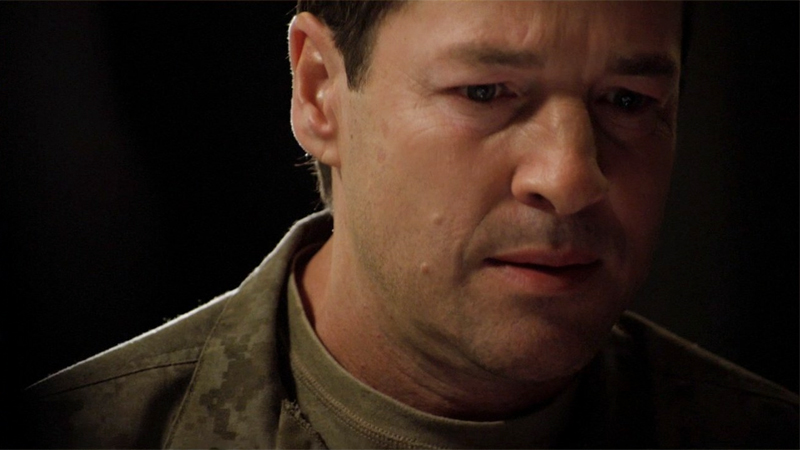 Michaels and Covel are aghast when they return to their bodies amidst the rubble of Homeworld Command. In the few seconds their minds are back in their own bodies, Dr. Covel looks at the Geiger counter. Simultaneously, in their few seconds back on Destiny, Wray manages to inform Colonel Young of the attack and their need to defuse the bomb.

The interruption ends, and the communication stones restore their long-distance connection. After Wray and Greer return, Airman Evans grabs Wray and threatens to kill her if they don’t all leave immediately. Wray manages to break free, and Greer kills the man. Finding his clan tattoo, Camille surmises that he was in face the Lucian Alliance the pilot, who was attempting to escape the blast radius before his bomb detonates. With the Geiger counter as a guide, Greer and Wray proceed to the heart of the radiation spike: the downed ship.

Intent on breaking the mental connection to learn the full truth of what has happened back on Earth, Young takes Michaels and Covel to the communications lab. But they can’t break the connection. Rush thinks radiation is affecting the protocols. Covel, who has studied the technology, offers to help.

As a (former) member of the Alliance, Varro makes it known that he knows how to defuse the bomb. Eli and Volker suggest a short F.T.L. jump to force another interruption to the link. Varro would have just 12 seconds to communicate how to defuse the bomb before Greer and Wray find themselves back in the rubble again.

Wray and Greer locate the ship and climb inside. Spotting the bomb container, Wray realizes the top is a holographic shield – meant to obscure the device below, so that it can only be deactivated by touch. Sticking her hands through the holographic layer, she feels the bomb underneath. But suddenly, she and Greer are back on Destiny. Varro is sitting right in front of them, concisely explaining how to defusing the bomb. 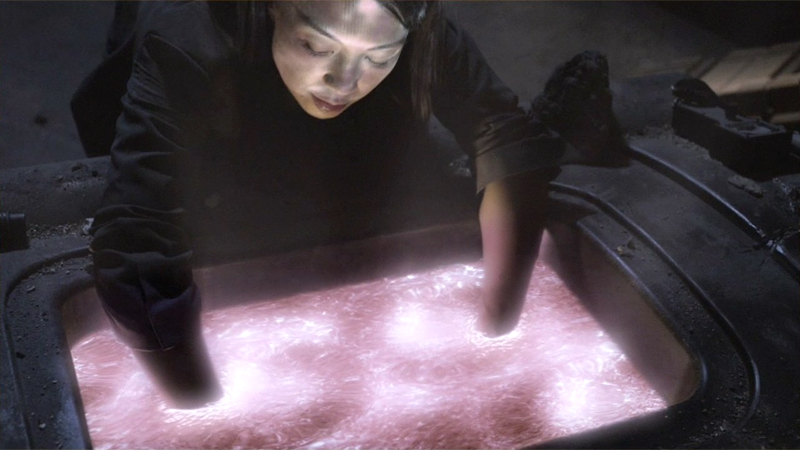 The interruption ends and they are back on Earth. In need of a tool, Wray removes the Senator’s lapel pin that she is wearing and starts to work. But when she finds the trigger wire, neither she nor Greer remembers what to do next. Rather than prematurely detonate the device, they stop, hoping their inactivity will at least allow more people to escape the fallout area.

On Destiny, Rush discovers that Covel has tampered with the stones’ transference frequencies. Covel confesses that he saw the Geiger counter during his momentary return to his body – he knows that both he and the Senator are already dead, and he doesn’t want to die. Michaels asks Varro to repeat the defusing instructions to her.

Once they are back on Earth, Senator Michaels picks up her lapel pin and starts to work.

Having come to respect one another through their shared ordeal, Sgt. Greer and Camille wait together on the Observation Deck for word from Earth.