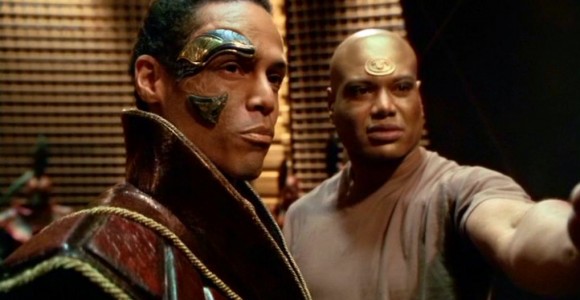 SG-1 finds themselves stranded in a crippled ship in a distant galaxy – with Apophis threatening to destroy them. Teal'c is brainwashed and made loyal to Apophis once again.

While "Enemies" is not the thrill ride of "Small Victories," this new episode provides more drama and greater character development than Season Four's opener. Daniel and Sam are both stronger, Jack and Daniel have a great moment in discussing Teal'c's presumed death, and Teal'c undergoes some massive brainwashing that sets him firmly back in place as Apophis' First Prime. Ultimately, we see all four members of the team stand out in one way or another, something no previous episode has given us. Perhaps this is the result of four writers having been involved in the script. Regardless, it works.

We've been watching Daniel Jackson "grow up" over the past few years. First introduced in the original "Stargate" movie, this character has evolved from a stereotypical science geek to a "man with a mission." Now it seems we can add "warrior" to the mix. We've seen our favorite archeologist in battle numerous times before. Yet suddenly in "Enemies" he is found wielding a weapon as though he owns it, while in previous episodes it seemed the reverse was true. He falls so easily into step with O'Neill and Carter -- shoot, fall back, shoot, fall back -- that it appears he's finally become a true part of the unit, someone they can rely on rather than someone they need to protect.

Carter did some growing herself in this episode. In the past, she's been seen to hesitate but never to outright disagree with her C.O.'s orders. However, in "Enemies" when Colonel O'Neill asks her to see what she can do with a control panel she shrugs off the suggestion and goes so far as to question, "What's the point?" Obviously she's become more comfortable with her own place on the team.

Still, perhaps part of her attitude here has to do with the proximity of her father. Jacob's negativity grates on the Colonel's nerves more than once, and could be influencing Sam. We see some good father/daughter interaction between Jacob and Sam Carter, most notably with Sam's "welcome to my life" comment to O'Neill after a key interchange regarding that negativity.

Nonetheless, it is Teal'c's development that steals the show. He has been brainwashed to such an extreme that he insists the friendship he had built with O'Neill over the years had been forced upon him, a fact which is said to have sickened him. Of course, his teammates know better.

In the beginning of the episode, the team believes Teal'c is dead. I was happy to see this belief was not forgotten by the writers. Each of Teal'c's teammates is seen dealing with his death in subtle yet realistic ways. Sam's mind is elsewhere when she needs to help her father with repairs, then she finally admits she's thinking about Teal'c. Likewise, Daniel and Jack, left with nothing to do, discuss his death in a manner that suits them.

Looking away from each other and thus keeping a certain distance from the depths of their own feelings, they have a brief yet revealing conversation. Jack feels a strong sense of guilt at having failed to prevent his friend's demise. Daniel absolves him of that guilt by reminding him that they were ambushed. That's all there is to it; but it is enough.

When next we see them, they are engaged in an inane, makeshift "ball" game while waiting for the Carters to fix the ship. This doesn't mean the mourning is done, however. It simply signifies that they can move on and get past it.

Jack's relief is tinged with suspicion when Teal'c communicates with them from a Goa'uld cargo ship. Even so, O'Neill is clearly not prepared for Teal'c's apparent betrayal. I'm not sure even a punch in the nose is enough to convince him his friend isn't acting for the benefit of the other Jaffa. Frankly, I think the Colonel would have continued to believe in Teal'c if Daniel hadn't suggested their former teammate had been brainwashed, reminding them all of what had been done to Teal'c's son, Rya'c ("Family").

So, their good friend and teammate has been compromised. He separates himself emotionally from them, but they refuse to do the same. After escaping from Apophis with the unexpected help of an even deadlier enemy, the mindless Replicators, their subsequent escape from the Replicators is not as clean-cut. Still, they take risks to ensure Teal'c goes with them -- willingly or not.

Yes, that's right. This season's opener gives us not one but two of our favorite enemies! Apophis is back, looking more regal and more fierce than ever, yet even he doesn't have the power to battle the Replicators, our favorite LEGO-spiders first introduced in Season Three's finale, "Nemesis."

I'm not sure I like the plot device utilized to bring the Replicators into our galaxy. An exploding sun sends two ships, already engaged in hyper-drive, 4 million light-years away; then a host of hungry Replicators join together to alter the technology on one of those ships, allowing it to make the return trip with equal ease.

I can't say that I completely disagree with the concept. It seems reasonable, in a sci-fi sort of way. Yet at the same time, it seems a bit contrived. It's just too easy.

I also don't like seeing this apparent end to Apophis. He's a great villain, and has gained his own degree of three-dimensionality over the years. Ah, but he has come back from the dead before, and this is sci-fi, after all ...

Costuming and set design are beautiful in this episode, with one exception. I simply cannot see any substance to the main console panel on the bridge, a.k.a. the "pel'tak." The panel just does not seem real to me. On the other hand, I love Cronus' "throne." The Replicators are also as impressive as ever; and the new uniform for Apophis' returned First Prime is more stunning than ever -- as are Apophis' own clothes.

Of course, Apophis himself adds a certain flavor to each of these. When the System Lord, in his fancy new duds, slinks into his former adversary's throne, it seems as though it had always been his, and it fits his every contour.

As to special effects, I have only one complaint. I did not get a good "feel" for the combined Replicators, or the "one big bug" as Jack put it. There was something missing there for me. Nonetheless, I certainly won't complain. I like the idea that the Replicators, too, are evolving.

What's next, from them, hmm? Certainly if one survived the demise of Thor's ship, why can't we assume at least one will also survive here? I'm sure we haven't seen the last of them!