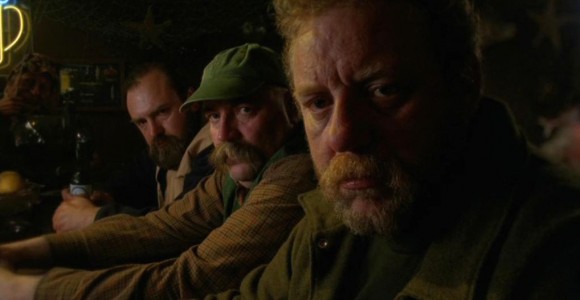 Carter, Teal'c and Jonas investigate the death of a scientist with connections to the Goa'uld, and find a small town whose citizens harbor a dark secret.

It was a dark and rainy night. A stranger makes a phone call, knows things he shouldn't, and then dies in a mysterious car crash. It sounds like an opening for an old film noire movie, but it isn't. It's "Nightwalkers," the latest episode of Stargate SG-1.

"Nightwalkers" is a campy mystery in a seaside town, complete with quirky characters whose origins hail from Twin Peaks or Northern Exposure. Of course, writers Joseph Mallozzi and Paul Mullie insert a few SG-1 twists into the mostly predictable tale which either pays homage to or borrows from well known sci-fi. "Nightwalkers" doesn't feel like an SG-1 episode, but implications introduced here probably will prove important in later episodes.

Director Peter DeLuise's choices of creepy, X-Files-esque music, unusual camera angles, and strong natural light on the locals in the daytime scenes complete the eerie feel of this episode. Mix in dark wardrobe and sunglasses, and Sam, Jonas and Teal'c look like Men in Black alumni.

Jonas's amazing powers of observation continue to be highlighted, from his having read all of the mission reports and the contents of the base library to people-watching that proves helpful in identifying that the folks of the town are acting strangely, to remembering the location of conspicuous tire tracks. Even Sam seemed amazed at the probability of the tire tracks' connection. Corin continues to make Jonas fun to watch, but how many more times can he make eating interesting, or notice just the appropriate thing at the right time without these tricks turning cliché?

Amanda Tapping shines, as usual, and not only does she get to lead the investigation, but she gets to kick alien butt in high-heeled boots and leather pants. Too bad we didn't get to see that scene, only the results. Sam single-handedly putting down a roomful of cloned Goa'uld would have provided some great action in an episode that needed a bit of high energy. However, Tapping does get a good shot in when slapping Jonas and gets to play a bit as a woman possessed.

Unfortunately, the cloned Goa'uld never seem to present a menacing threat. Their initial plan to build a space ship and escape Earth are switched to one of world domination through the infiltration of the N.I.D. and the S.G.C. -- an idea that seems ripped from the Star Trek: The Next Generation episode "Conspiracy." Only when the N.I.D. agents are possessed late into the episode is there any feeling that things might escalate.

Problems, plot holes, or potential future implications? Dr. Flemming takes amphetamines to keep from falling asleep, presumably because only when the humans fell asleep were the immature Goa'uld able to take over. So, was Flemming possessed by a Goa'uld, or was he afraid to sleep because he thought he would be Goa'ulded? And, why didn't he take the vaccine before trying to escape instead of mailing it to himself? One reason is to provide the timely coincidence for SG-1 to be at the house when it was delivered so that Sam had a way out of her Goa'ulding, but a less-coincidental reason would have been nice.

Also, Flemming's body was never found. No body means he may not necessarily be dead. Will he be a player in a later episode? Is he Goa'ulded and running around loose? Only time will tell.

A missed opportunity that I totally expected and anticipated when I saw the exterior of the motel was the continuation of the gag of Teal'c and a vibrating bed from "Point of No Return." A scene in which Teal'c introduced "magic fingers" to Jonas would have added welcome humor. Instead, what is quickly becoming a habit of having Jonas eat in each episode was continued, this time onion rings dipped in a chocolate milkshake.

Good things from the story include inheriting a half-built Goa'uld ship and its plans, as well as a possible vaccine against being Goa'ulded. Granted, the engineered symbiotes had a "kill-switch" susceptible to the vaccine, but who's to say S.G.C. scientists can't develop something from it to use as a weapon against the real McCoy? It will be interesting to see how or if these will prove useful in later episodes.

Ultimately, "Nightwalkers" is an interesting episode with several of fun character moments and quite a few implications for the remainder of the season, but with very little action and few special effects. It's okay as filler between "Frozen" and "Abyss," but on it's own it doesn't rise to the level of previous Earth-based, non-S.G.C. centered episodes like "1969," "Point of No Return," or even last season's progenitor "Desperate Measures." Who can forget gasping when the scientists were ready to inject Sam with a lethal cocktail and hoping Jack and Maybourne would get there in time?

Conversely, who sincerely didn't know that Sam was play-acting as a Goa'uld after injecting herself with Flemming's anti-symbiotic?

Finally, of the first five episodes of Season Six, "Nightwalkers" is the fifth that is Earth-centric and the third in a row in which the series' namesake, the Stargate, doesn't play a major factor in the storyline. Not saying that's bad, but I am beginning to get an off-world itch that just needs to be scratched by an action-packed, seat-gripping episode.