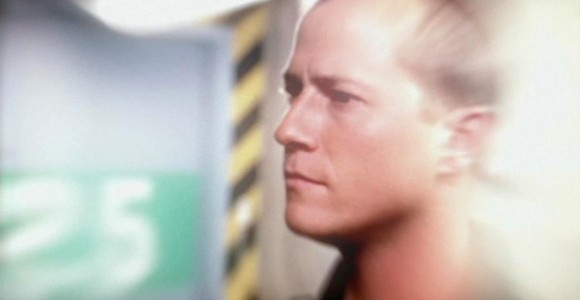 The team finds an impoverished world enslaved by a Goa'uld underlord, but their plans to free it may be compromised when Jonas experiences unexplained visions of the future.

Precognitive visions and Goa'uld attacks aside, "Prophecy" is a very character-centered episode, one of the best showcasing Jonas Quinn since "Shadow Play." Even if one isn't particularly inclined towards the character, however, there's still plenty about the episode that's interesting and entertaining.

Whereas "Shadow Play" gave us some insight into Jonas's past, "Prophecy" -- ironically enough -- sets the stage for his future, wherever it may lead. Through his interaction with Janet, we learn that after almost a year on Earth, serving with SG-1, Jonas still feels some of what he expressed back in "Descent:" the need to prove himself to others. Even though the rapidly-growing tumor in his brain could very well kill him, he puts the most importance on the potential good it could do as a strategic tool.

In a way, he's correct; it's his warning to Hammond that sets in motion a chain of events that changes the future as he foresaw it. But by arguing against surgery until the last minute, when Fraiser makes the decision for him, he also puts himself in terrible danger in order to be considered useful.

One of Jonas's greatest struggles, as evidenced by his conversation with Sam in the infirmary, is to what degree the things that he sees are etched in stone. It's a question that fictional characters -- and their fans -- have been asking at least since Charles Dickson's "A Christmas Carol," and probably even before. Can the future be changed? Is there such thing as fate? Do humans have free will or are the outcomes of our lives predestined?

It's not a novel concept, especially for science fiction, but Stargate puts an interesting spin on it by bringing in Newtonian physics and the Heisenberg uncertainty principle. In order to be able to predict what will happen in the future, Sam infers, we have to be able to observe it in the present. But in the case of quantum physics -- and prophetic visions -- one can't observe without affecting the present ... which in turn affects the future.

Jonas's vision of the Jaffa ambush is the perfect example of this, and also brings up some complex paradoxes. Hammond sends a warning through, which leads the traitorous natives to realize that Jack, Teal'c and the others have escaped. Ignorant of Mot's ambush at the Stargate, an alarm is sounded, which gives our heroes just enough notice to turn the tide and defeat the Jaffa. Hammond was only able to send the warning in the first place because of Jonas's vision, but it was a vision of something which ultimately never happened.

Even though it's not new, this is one of those topics that make for good television because it asks an unanswerable question, and even though the solution is elusive we find ourselves searching for it nevertheless, right along with the characters.

Jack and Teal'c are on the receiving end of Jonas's visions, but they also play an important role in their liberation of the locals from the Mot, a Goa'uld slowly gaining power to escape servitude under Baal. Jack, Teal'c and the other members of the S.G.C. were forced into an unstable situation, dealing with some individuals who acknowledged that Mot was not a god but feared his wrath above all else. It's a new perspective on a common scenario: the terrorized citizens don't see the Goa'uld so much as a divine being as a powerful tyrant possible to overthrown under the right conditions.

At the end of the day, of course, our heroes prevail. Precognitive visions led to Jack and Teal'c's successful battle against Mot's Jaffa. The predictably-villainous Mot himself was the recipient of some impressive amateur marksmanship. Sam missed out on much of the off-world fun, but she did get to have a nice heart-to-heart with Jonas.

And Jonas ... he wound up getting something he probably never expected: an indication of real concern and acceptance from Jack (who may or may not realize that, for some, Vegas is a more appealing vacation spot than northern Minnesota).

Jonas's fate from here on out is currently in question. However, fans of the character can certainly enjoy this episode for the insight it gives -- and the hope that Jonas no longer feels that he must prove himself to his team.