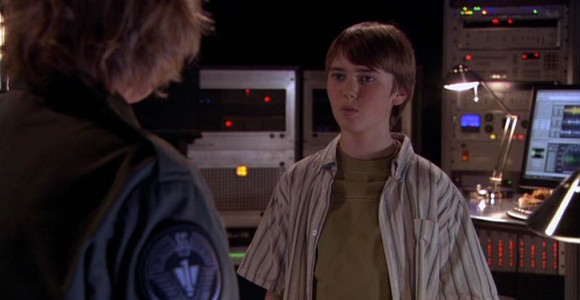 Earth is infected with a deadly Ori plague, prompting an ally from SG-1's past to come to their aide. Gerak proposes that the Free Jaffa follow the Ori religion.

In the original pitch, this Earth plague story was intended as an SG-1 / Atlantis crossover that would finally reveal the mysterious entities behind Atlantis Season One's "Hot Zone" virus. After much discussion, it was decided to lose the connection to the "Hot Zone" villains (watch for them in Season Three of Atlantis) and make it a strictly SG-1 story.

As we started work on the scripts, we received word that Sean Patrick Flanery, the actor who portrayed Orlin in Season Five's "Ascension," would not be available. Rather than recast with an adult, we elected to make the change in physical appearance play into the story by having the character return as a young boy (as a means of retaining more of his ascended memories).

Originally, production concerns dictated that this be a Daniel-lite episode. But when circumstances changed, Daniel was written in. General John Jumper, the U.S. Air Force Chief of Staff, was supposed to make an appearance but, when his schedule changed, I rewrote the script for Don Davis (and wrote the extra scene at episode's end in which Hammond walks into the briefing room and addresses the team).

To be honest, this was a very challenging two-parter to produce for reasons too numerous to get into. And, while not my favorite of episode(s), it did offer up two particularly memorable scenes: Teal'c's confrontation with Gerak, and the Landry-Lam reconciliation at episode's end.

The second part of the two-parter was long and, as a result, several scenes (and parts of scenes) didn't make the cut. For example: