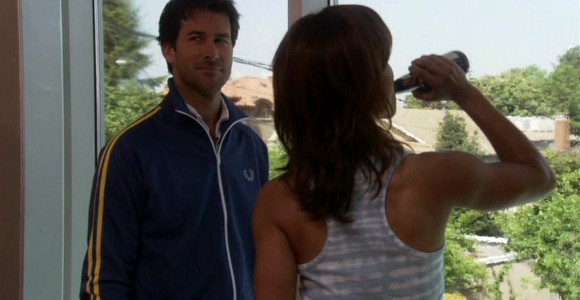 McKay's efforts to harness the energy of an alien planet's atmosphere allows for a return trip to Earth – but the team may not be able to return to Atlantis.

Dr. McKay has convinced Major Sheppard to send the team to M5S-224, believing energy readings showed evidence of civilization – but the only thing present is atmosphere that resembles fog (though it is not water vapor). As they dial the Stargate back to Atlantis, McKay takes readings and discovers the gate is actually drawing its power from the mist. With this much potential power, it'd be enough to dial back to Earth.

Dr. Elizabeth Weir listens to the team's incredible findings. McKay offers to return to 224 with the control crystal that will make the dial-home device there compatible to return to Earth. He and Lieutenant Ford go back to the planet to install the modification, and soon report back with success. Dr. Weir, Major Sheppard, McKay, Ford and Teyla are present when they raise Stargate Command. Sergeant Harriman reports that the Asgard are in the process of installing Prometheus with engines capable of crossing galactic distances – if they come home now, they could be back to Atlantis inside a month.

The group steps through the Stargate, and Weir and McKay are soon debriefing General Hammond. When he is informed of the threat of the Wraith he is eager to tell the Pentagon that it is important to withdraw from the Pegasus Galaxy. Weir is insistent on returning, however, stating that the technological advancements alone that Pegasus could offer, not to mention the responsibility Atlantis has because of reawakening the Wraith, are reasons enough to return and remain. Meanwhile, Sheppard takes Teyla on a shopping spree and Dr. McKay returns to his apartment to pig out and relax.

After the debriefing, Dr. Weir returns to Simon's home, more than eager to be back with him and her dog Sedge for a short time. He gives her a necklace as a welcome-home present, but is soon summoned away by General Hammond. At McKay's house she reports that there has been an accident on Prometheus. They won't be able to return to Atlantis. McKay has not given up, though. He reports to Hammond with a plan to gate back to M5S-224, believing that after 3.5 microseconds of use from the depleted Z.P.M. the energy source on 224 will take over and maintain the wormhole (akin to making a long distance call and having the recipient accept the charges).

Weir asks Hammond for permission to contact the Asgard and ask for one of their ships, but Hammond assures her that when such a thing is possible they will contact Earth. She returns to Simon's side, who asks her if it would really be so bad to stay home, but Weir feels guilty for not having Sheppard take her place and return instead ...

Later, Weir learns from Hammond that McKay is succeeding in his experiments to reopen the gate from their end. After that is done, a reinforced military team, and a new commander, will travel to Atlantis. Weir is not to go back to the city. Sheppard, who successfully dialed in from his end about an hour ago, agrees. Weir does not believe it is possible that Sheppard would make such a decision without at least consulting her first. Meanwhile, Ford receives new marching orders from Sergeant Harriman: he's to report back to Antarctica for his new assignment and give up on any chance to return to Atlantis.

Sheppard takes Teyla to his house in the Green Moss Park area, introducing her to beer. Soon he wants to leave and show her more of his world. Teyla suggests he might enjoy spending time at home and visiting with friends. As soon as John thinks it's a good idea, his buddies, Mitch and Dex, show up at his door. Soon more people arrive and a party begins to brew. Ford eventually shows up with a dozen pizzas.

Weir visits McKay, still distraught that she has been suspended from her duties. He tries to help her see the up side of the situation. She can now get on with her life with Simon, whom she does not remember ever telling him about.

McKay is visited by Dr. Weir, hoping to determine why he is so upset. He tries to explain to her that the laws of physics seem to no longer apply. He even shatters the Z.P.M. and finds nothing at the core but shards of colored glass.

Sheppard is sharing memories with his old friends to the rest of the crowd regarding their missions in Afghanistan, until out of nowhere, he declares that they were killed just outside of Kabul. He grabs a gun and shoots Dex in the chest, then holds the gun against the entire room.

Just before Weir is about to crack, she and McKay are visited by General Hammond. McKay disappears and Hammond insists there is no need to further delude her mind with fantasies. He temporarily changes shape into a gaseous form, not unlike that of M5S-224. He then tells her that the others are in their own illusory worlds on 224, having never made it back to Earth.

The entity posing as Hammond unites the fantasies together, allowing the team to share the reality of the S.G.C. Gate Room as he explains. The mist is alive, and his kind occupies it in a non-corporeal form. To gate back to the Milky Way galaxy would have required such a power drain that millions of its kind would have been destroyed. Weir and the others will have to live out their lives in a fantasy of their choosing. McKay soon speaks up, saying that their human forms require food and water, but the Hammond entity says they had better enjoy themselves with the little time they have left.

The team insists that others will come to discover what has become of them. Millions more within the mist will die. Weir gives the creature her word that they will return to Atlantis and never come back. With access to their minds, the being knows they are being truthful.

The entity allows the team to reawaken. McKay begins to work on disconnecting the eighth-chevron crystal so the team may return home ... to Atlantis.