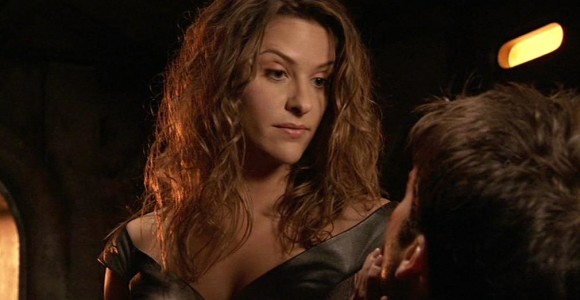 Colonel Sheppard is captured by the inhabitants of a generational ship and their beautiful leader, who wish to use his ability to use Ancient technology for their own ends.

Lt. Colonel John Sheppard is captured by a race the team has never before encountered, who live out their lives on board a generational ship. Their leader is a to-the-point woman named Larrin. Whereas most races settle on a planet – doing whatever they can do avoid the Wraith – Larrin's people have taken to space, living their entire lives on this generational ship to avoid their enemies. This ship is their home. But it's not only to avoid the Wraith, Larrin tells Sheppard – after so many years, now it is simply who they are.

Over the past few years, her people have heard rumors of a new power in the galaxy, humans who are using Ancient technology to battle the Wraith – the Atlantis expedition. They set up spy satellites around many worlds, and eventually discovered and captured Sheppard. Larrin is quite interested in the fact that John has the gene required to operate Lantean technology.

Commander Larrin's people are attempting to create an interface that will allow them to use the advanced Lantean technology, and require a sample of John's blood. But that is only the beginning: they have a Lantean battleship. The massive vessel has been dormant for thousands of years, and Larrin wants Colonel Sheppard to make it work.