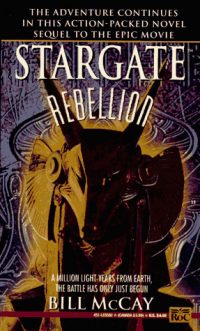 Jack O'Neil, Daniel Jackson, and the newly freed people of Abydos must deal with the fall-out of Ra's destruction when his successor, Hathor, arrives.

When the crack team of scientists and soldiers entered the Stargate, armed rebellion on a planet a million light-years away was the last thing on their minds. Now that it's started, no one can ignore it -- not commando Jack O'Neil, not renegade Egyptologist Daniel Jackson, and most of all not the newly freed people of Abydos.

But both the U.S. Army and Ra's vicious successor, Hathor, have other ideas for the Stargate.

This book takes place shortly after the film novelization's mission to Abydos. If we are to believe that the blast-lances taken home from the first Abydos mission were turned over to engineers to study immediately upon their return, then this takes place two weeks after the end of the film and its novelization.

After the original mission to Abydos, Jack and his wife have reconciled, while he continues to heal from Jack Junior's death. On Abydos, Daniel is teaching the Nagadans to read, and they have not buried the Gate, which was a TV series invention. Meanwhile, on Tuat-the-moon, above Tuat-the-world (with "Tuat" being the Egyptian mythology version of Hell, basically), a power struggle is beginning between the various servants of Ra, children-now-grown who were given morphing armor and leadership to serve as Ra's right-hand beings. Among them are Sebek (warrior Crocodile), Khnum (Ram), Apis (Bull), Ptah (engineer), Hapi (minor ape-headed god), and Thoth (Ibis, a stork-like bird, who happens to be, more or less, Ra's accountant).

With Khnum (technically, we should call him Khnum II, as we'll learn of another, earlier Khnum in Retribution) and Apis already in odds with each other, Sebek is pressuring Thoth to back him in case Ra really is dead (since he never returned from Abydos). However, Thoth instead goes to a secret tomb on Tuat-the-moon and resurrects another of their number, the Cat-headed Hathor, who had been in her tomb for millennia, after she was drugged by her own kind for intending genocide, rather than pacification, on the planet Ombos, a rebellious slave world in Ra's empire (populated, we might think, by Humans, but, as we later learn, populated by the Setim, the ancient slave race Ra used before finding Humans on Earth). Hathor promptly takes out Sebek (beheading him), in order to claim leadership of his forces, thereby giving her an army of her own.

Meanwhile, the U.S. military, led by General West, starts to make headway in setting up a quartz-crystal mining operation on Abydos. Among the bigwigs of the upcoming operation are Walter Draven, point man for United Mining Consortium (UMC, as opposed to the USMC, the United States Marine Corps), and Martin Preston, engineer. They begin scheming almost immediately, planning to use the natural leader Skaara to destabilize Kasuf's Nagadan government, if need be.

Deals are struck to begin the mining operation. The Nagadans will be paid in Susan B. Anthony silver dollars, but there is no written contract, and UMC is used to getting their way in manipulating Third World countries. The new site manager will be Eugene Lockwood, who is somewhat dubious of Preston and Draven's plans to modernize the operation and win over the population with modern technology. He knows things will get much, much harder on the Nagadans with these new plans than they might really have to be. But, hey, it's not slave labor under Ra, right? (And speaking of slave labor, Skaara has grandiose ideas now of going through the Gate to liberate other humans on other worlds Ra conquered, similar to the mission of Earth in Stargate SG-1.)

The problems don't stop there, though. Lockwood has the Earth men blast a big hole in the front of the pyramid to allow trucks and such through from the StarGate. Then, they put limits on the use of the Tent of Rest in the mines, which are rather ludicrous. After one Nagadan (referred to by Lockwood by the derogatory term "an Abbadabba") gets annoyed and tries to damage the UMC elevator in the mines, nearly killing one of the UMC personnel, Lockwood brings in ex-Navy SEAL Vernon Ballard to head a security regiment, then (when he realizes that O'Neil might not be a willing ally), pushes General West to appoint a new commander to the military forces.

They get Brigadier General Francis Koegh, a very by-the-book, career-concerned military man, who is also of little help, but will back up UMC in the interests of the American government if necessary. Finally, the last straws break as a mine worker (Zaid) that needs rest is sent plunging to his death after manhandling by UMC and military personnel, leading Daniel to call for a strike and boycott on Abydos. This eventually prompts Lockwood to try to get Skaara to overthrow the elders, not realizing that Kasuf is Skaara's father. With things a huge mess, Draven is none too pleased, and it looks like things are about to come to a military confrontation ...

Back on Tuat, the power vacuum left by Sebek's death is filled by a trial by combat, overseen by Hathor. The new Sebek (Sebek II, we'll say) will serve her. Hathor and Thoth also enlist the aid of the engineer of Ra's empire, the master of technology Ptah, who is the self-same Ptah (kept alive by mechanical augmentation, rather than a sarcophagus) that married Hathor ages ago -- the Cat's husband. She sets him to the process of refitting and re-commissioning Ra's battle fleet, which he'd decommissioned after she'd been put into stasis. (Even Ra thought Hathor's thirst for blood was too extreme. How insane must she be?)

What's more disturbing than that? Oh, yes, Ra's pyramid ship on Abydos was his personal yacht, much smaller than the actual battle vessels (just like in Stargate SG-1 continuity). Khnum (that is, Khnum II) uses the fact that Ra ordered them decommissioned to paint Hathor as usurping his power against Ra's own wishes, but the shouting match only ends in Hapi (a minor god) dead by Khnum II's throwing knife and Khnum II himself dead at the hands of Hathor's punishment jewel. Ptah gets the first ship ready, but during a test run of the ship (Ra's Eye), Hathor is nearly assassinated by forces loyal to Sebek II and the bull "god" Apis. Hathor promptly enters where Apis and Sebek II are holding Thoth. She kills Apis and Sebek II, but Thoth is already dead. She makes plans to head out in search of Ra's yacht and what became of him immediately, rather than allowing these power plays to continue.

Finally, our two story threads begin to converge. Even as the military and UMC begin bearing down on Nagada to force an end to the strike and the relinquishment of any weapons (like blast-lances) left in Nagada by Ra's forces, our heroes look to the opposite direction of the advancing military and see ... Ra's Eye. Before the humans can do much, Hathor blasts Koegh to oblivion, then lands the ship on the pyramid, sealing off all access to the StarGate.

Quickly, O'Neil organizes Skaara's home-grown boy militia and the remainder of the U.S. military forces into one fighting force, with Daniel and Sha'uri right alongside him. Unfortunately for Lockwood, Ballard, and Draven, they find themselves at the StarGate as Ra's Eye lands, then on the receiving end of blast-lance fire as the StarGate opens, revealing Hathor's Horus guards. Unfortunately for Koegh, his APC can't handle shots from Hathor's warship, so he croaks too.

After a prolonged battle, Hathor is about to leave, figuring it is a stalemate, when one of her ship's crew opens a lower-level door to let in surviving udajeet pilots, against orders. O'Neil and his men use this as a means of getting inside and fight their way up toward the bridge. When Hathor tries to escape with the doors jammed open anyway, the quickly-refit ship has a power cascade that shuts it all down.

Finally, Hathor retreats with some of her forces through the StarGate to another location (not Earth), vanishing down to the Gate with the slightest bit of harsh words for Daniel Jackson, who happens to catch a glimpse of her. The symbols showing on the Gate give the Earth team the "combination" for a brand new planet. In the wake of the battle, O'Neil reports back to West, who intends on going through the StarGate to check out their newest spoil of war -- Ra's Eye, now abandoned on Abydos ...

For the start of an entirely new "StarGate" continuity branching out from the film, Rebellion sets the stage for this new universe rather nicely. Granted, it isn't as flashy as "Children of the Gods," but, then again, this is a novel series meant to be a direct continuation of the films, without regard for casting changes and other marketing aspects that go along with creating a spin-off television series.

In a way, it stays more true to the film's continuity than Stargate SG-1 has since day one. Ra is still the last of his race, and the "godlets" are very much like Anubis in the feature film, an armored second-tier leader among armored military-esque Horus guards. The origin of the StarGates is handled quickly and cleanly.

I suppose it is best to say that the StarGate novel series, at least at this point, focuses on moving the story of the film forward, rather than developing an intricate, epic new mythology behind the scenes of the film. In that respect, it fares well. It cannot compare to the Stargate SG-1 continuity we know and love, but it's certainly an entertaining answer to many of the great "what ifs" of how the film's roots developed.

One has to wonder just how much closer this continuity is to what Devlin and Emmerich originally wanted before they sold off the rights to spin-off materials (and their right to complain about them), oh so long ago.